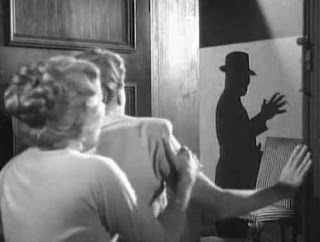 
Though the late fifties marked a comparative upsurge in horror films in comparison to the decade's first half, I'm still somewhat puzzled as to why this film's production company, in association with distributor Allied Artists, chose to remake an "old dark house" property. Although the 1920 play THE BAT (loosely based on a bat-less novel) was a success, as were two early film versions, the concept looks rather fusty for something presumably aimed at audiences enthralled by bloody shows like HORROR OF DRACULA, or even the more restrained violence of HOUSE OF WAX.

My speculation would be that even though most of the "old dark houses" had gone vacant back in the 1940s, the burgeoning horror genre convinced someone in Hollywood to decide that old dogs didn't need to learn new tricks for the current audience. THE BAT's director Crane Wilbur, also credited with re-adapting the story for this 1959 production, had scored a hit six years earlier by writing about another kind of "house," albeit one filled with wax statues. WAX, like its less distinguished follow-up THE MAD MAGICIAN, probably profited less from Wilbur's scripting than from the bravura performances of star Vincent Price. But perhaps someone decided that Price and Wilbur might prove a winning combination one more time. After all, hadn't WAX been an update of a hoary old horror-flick whose original template was probably unknown to most young viewers?

Wilbur, primarily more allied to stage than to screen, had written, directed and acted in a plethora of films since the silent days, not least playing the male lead to the heroine of 1914's THE PERILS OF PAULINE. Aside from that serial and HOUSE OF WAX, Wilbur's output in all three departments seems at best middling, and THE BAT is no different. To be sure, the early setup scenes in THE BAT don't look as stage-bound as do Roland West's two adaptations of the play, and Wilbur succeeds in communicating some good tension between two parallel developments: (1) spinster mystery-writer Van Gorder (Agnes Moorehead), who rents a mansion with minimal help from her maid, while a murderous crook named "The Bat" is on the loose, and (2) criminal doctor Wells (Price), who learns of stolen bank-loot hidden in said mansion, and who commits murder in order to gain that fortune. Wilbur's exposition is spare without drawing attention to the cliched nature of the narrative. 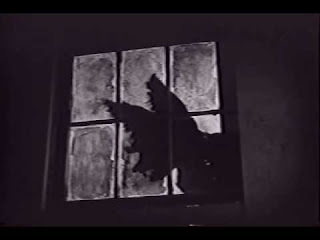 However, even though I can appreciate the way Wilbur tries to make the story's thin material more credible, he also undermines the film's ability to scare anyone. In Roland West's 1926 adaptation, the spectre of the master criminal is fascinating, even though the costumed crook really has no good motive to dress up in such an outfit. The 1959 Bat is just a man wearing a suit, a dark face-mask and gloves fitted with claws (which must've made it difficult for him to turn doorknobs). The script talks about, but does not show, the way this version of the Bat savages the throats of his victims, which is presumably someone's attempt to juice up the old war-horse with some extra violence. But when the villain's identity is disclosed, the script doesn't address his reason for creating a bat-persona. West's less realistic 1926 version transports us to a world where such motives have no significance.

Given that Vincent Price is seen committing a murder in the film's first twenty minutes, I find it unlikely that any audience-members ever bought him as a serious candidate for Bat-hood, unless they'd never seen a murder mystery before. Nevertheless, the script tosses a couple of teasers associating Doctor Wells with bats, particularly after the criminal unleashes a non-rabid chiropteran critter on Van Gorder and her maid to get rid of them. Van Gorder, being a devotee of mysteries, can't be driven from her rented house even though the local cops aren't able to find the murderer who's able to come and go as he pleases. It's a credit that Moorehead makes Van Gorder compelling even though her behavior makes no rational sense.

Toward the climax, Price's character and the real Bat have a so-so battle, after which the Bat menaces the women once more, gets killed and is unmasked. By this time, the narrative has lost whatever steam the opening gave it, and it fades with Moorehead breaking the fourth wall to address the audience briefly-- which conceit may have been borrowed from one of the forties' dark house-flicks, if not from a slightly similar denouement in William Castle's 1958 MACABRE.
Posted by Gene Phillips at 1:35 PM
Email ThisBlogThis!Share to TwitterShare to FacebookShare to Pinterest
Labels: outre outfits (u), the uncanny