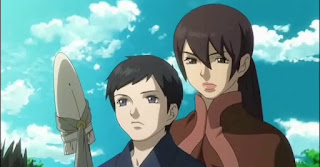 
When this anime adaptation of a book series aired on Cartoon Network, I watched it episode by episode. Only upon re-watching the whole 26-episode series in one binge, though, did I realize how incredibly slow it is, even though it contains such visceral elements as (1) royal assassins sent by the Mikado to execute the ruler's own son, (2) a female bodyguard who protects them with her sole weapon, a spear, and (3) a mysterious water-spirit gestating inside the prince, which threatens both his life and the safety of this medieval Japanese realm.

Clearly the producers of the series made a conscious decision to avoid the hyperkineticism common to most contemporary commercial anime, so MORIBITO isn't slow simply because its creators were lazy. Nevertheless, a lot of episodes remain less than engaging, perhaps because most of the characters take a back seat to central heroine Balsa the Spear-Wielder-- and even her emotional arc is somewhat distanced and remote.

I presume the original author of the book series based his concept on Japanese mythology, but the essence of the idea proves universal, resembling countless dramas about youths sentenced to die as sacrifices to deities. Here the Mikado's son Chagum, having been possessed by a water spirit, is perceived as dangerous to the realm, so that the Mikado orders his demise. Chagum's mother hires Balsa, a rare female warrior, to take Chagum into the countryside and to guard him from assassins. Balsa accepts this duty with all the sturdy professionalism of a samurai. In later episodes it comes out that by coincidence Balsa had a similar experience in her childhood. Following the slaying of her last parent, her father, one of the father's friends, a professional bodyguard, took Balsa with him on the road and eventually taught her spear-craft.

Thus Balsa is to some extent reliving the same sort of filial relationship that sustained her in her early years-- though the principal emphasis of the modern-day stories is the relationship between Balsa and Chagum. Though their relations are initially very strained, given that Balsa is acting out of professional priorities, they evolve a loose mother-son bond. Balsa never quite becomes "motherly"-- one of the characters remarks that as a child she was a "tomboy"-- but the series is interesting in that a non-maternal female is obliged to act the part of a mother, even though by the end of the series she returns to being a solitary crusader, while Chagum returns to the imperial court.

The weakest aspect of the series is the mythology involving the water spirit inside Chagum and a horde of ethereal beasts who devour such spirits, both of which spell peril for the prince. I would guess that this failing may originate with the prose series, though I don't plan to read it in the near future.

Posted by Gene Phillips at 3:36 PM
Email ThisBlogThis!Share to TwitterShare to FacebookShare to Pinterest
Labels: combative dramas, the marvelous