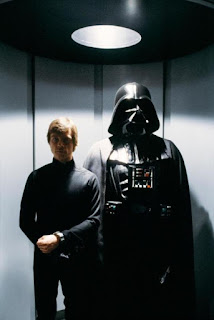 
I usually don't read secondary film-commentaries before writing my reviews. However, in the last few weeks I happened to finish Chris Taylor's HOW STAR WARS CONQUERED THE UNIVERSE, which I found helpful in determining how George Lucas and his collaborators cooked up the various elements of the "Star Wars" universe. Or at least, it was helpful with respect to STAR WARS and THE EMPIRE STRIKES BACK. Oddly, though, Taylor barely provides any insights into RETURN OF THE JEDI.

It may be that Taylor drops the ball on extensive behind-the-scenes analysis of JEDI in the same way that Lucas himself did with regard to following through on elements of plot and characterization established in EMPIRE, and for the same reason: because there just wasn't much going on with JEDI. Taylor shows how Lucas and certain collaborators (particularly producer Gary Kurtz, who's said to have a "comparative religion itch") patterned the first two films after research into mythology and folklore (even though the much-publicized connection to Joseph Campbell's works seems to have appeared late in the game). Taylor does mention that Kurtz left Lucasfilm after EMPIRE, which I would speculate may have played a role in JEDI's comparative lack of mythic discourse. But on the whole Taylor concentrates on the same things on which Lucas concentrates. This included the recycling of the "Wookie rebellion" storyline, formulated for but not used in the first film, and yet another Big Reveal, that of the disclosure of sibling-hood for Luke and Leia.

JEDI's biggest "sin of omission" with respect to EMPIRE content is unquestionably the bollixing of Luke Skywalker's two interwoven traumas: that he finds himself to be the son of his deadly enemy, and that his two prized mentors Kenobi and Yoda hid this truth from him. The writers certainly could have concocted some half-decent rationalization for the reticence of Luke's teachers ("Such a terrible revelation could have unbalanced you during a critical point in your training, Young Skywalker.") But by the time Luke finds Yoda, the old teacher conveniently decides to give up the ghost. Thus the lion's share of explanation goes to the spirit of Obi-Wan Kenobi, who shows up for a long dialogue with Luke after having been all but incommunicado during EMPIRE. Kenobi tosses out a few disorganized justifications about the importance of Luke controlling his emotions, but the old Jedi never really makes his motivations believable.

Similarly, nothing in JEDI justifies Yoda's minatory pronoucements in EMPIRE, in which the old green dwarf counsels Luke to let his friends die in order to complete his Jedi training. Instead, once Luke returns to Yoda's world with the notion of continuing the interrupted regimen, Yoda says that Luke's training is already complete. Really? Then why did he want Luke to stay? Again, the folderol about Luke's vulnerability to the Dark Side is the closest the viewer gets to an explanation. But at no time does the script really make Luke seem vulnerable to such a seduction. Indeed, despite his torments at the end of EMPIRE, all through JEDI Luke seems to have passed through the fires of baptism without so much as a scorch-mark. The teaser in EMPIRE, to the effect that "another" potential Jedi Knight might be called upon if Luke fails his trials, is weakly reworked to a simple acknowledgement that Leia, being Luke's sister, might be able to take up the Jedi mantle-- which of course is a potential that the film does not intend to explore. Lucas knew that his audience wanted to see Luke fight Vader with worldly human passion, rather than unworldly Jedi serenity. Moreover, contrary to Yoda's opinions, emotion has a good effect on Luke's fighting instincts, for he bests Vader after the latter speculates about making a devil's bargain with Luke's newfound sister.

But even though Lucas and company do a terrible job of making Luke seem vulnerable to Dark Side conversion, the Emperor and Darth Vader move heaven and earth to seek that end. EMPIRE had Vader propose that Luke join him in overthrowing the Emperor so that the two of them might rule the cosmos together. JEDI conveniently forgets this, for now Vader is as loyal to his mentor as a samurai would be to his feudal lord. This is the only rethinking that actually works to JEDI's benefit. When Luke wins out over Vader, the Emperor invites the youth to kill his father and take his place at the Emperor's side-- all uncaring that his faithful minion hears this. Thus, when the Emperor attempts to kill Luke, Vader seems to undergo an internal struggle, both about saving his son's life and about contravening his mentor's will. It's not impossible that at this point in the "Star Wars" saga, Lucas-- who finally had to tie up most of the loose ends he'd tossed out in the first two films-- may have become far less interested in Luke and his "hero's journey" than in the tragic, doomed arc of Darth Vader-- which, of course, would eventually inform the three "prequel films."

Even though Luke never seems in danger of being seduced to the Dark Side, the "Temptation of Saint Luke" plot is the only reason that JEDI deserves a rating of "good" for its mythicity. Luke's revelation of his shared bond with Leia is underwhelming at best, though it's a little better than the leaden romantic scenes between Han and Leia, given that EMPIRE had raised audience-expectations in that regard. Though the original STAR WARS was unfairly critiqued in some quarters for its video-game aesthetics, JEDI seems like a throwback to the "fast-car" antics of AMERICAN GRAFFITI. The film's opening scenes, in which Luke and friends rescue Han from Jabba the Hut, present tolerable action-scenes, though at no time does Jabba seem like anything but a minor annoyance. The film's main B-plot, wherein the Emperor seeks to lure the rebel alliance to its destruction, is far less compelling than the Jabba sequence. Back in the day I didn't hate the Ewoks as much as some viewers did, but they were only interesting insofar as they illustrated Lucas's idea about how primitive tribal fighters could overcome the forces of high-powered technology. Chewbacca, R2D2 and Lando Calrissian are all given piddling things to do, and only C-3PO gets any scenes on a par with his material in EMPIRE.

I suspect the many elisions of JEDI came about because at the time Lucas simply wanted to tie things up in as expeditiously as possible. Certainly, despite some early ruminations about a nine-part series, Lucas didn't take steps toward the prequel series for over ten years. Whatever the downsides of that series, however, I for one am glad that he didn't end his participation in the "galaxy far far away" with RETURN OF THE JEDI.

Posted by Gene Phillips at 3:01 PM
Email ThisBlogThis!Share to TwitterShare to FacebookShare to Pinterest
Labels: combative adventures, the marvelous