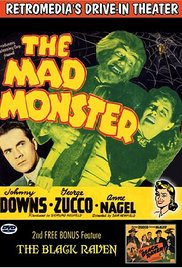 
I liked this PRC cheapie a little more than DEAD MEN WALK. There's actually more storytelling potential in the later film, also a starring vehicle for George Zucco and also directed by journeyman Sam Newfield. I might have expected MAD MONSTER's story to be the stronger of the two, since MONSTER was PRC's initial attempt to find out if support-actor Zucco could carry a horror-film a la Bela Lugosi. But despite a routine plot-- that of the mad scientist who experiments on some poor, good-hearted schlub-- MONSTER does carry a little emotional resonance beyond the ordinary. For modern viewers it helps that the victim of the experiment, a handyman named Petro, is played by Glenn Strange. I wouldn't say Strange sets any houses on fire in playing a science-spawned werewolf, but it's fun to see him in the role, since he was then about a year away from his first outing as the Frankenstein Monster in HOUSE OF FRANKENSTEIN.

Given that I touched on the potential Oedipal theme in DEAD MEN WALK, I considered whether or not this tidbit also appeared in the earlier film. Certainly, going back to Mary Shelley's original "mad scientist" novel, there have been such experimenters who would create monsters, in part to have them commit the acts that the scientists themselves dared not perpetrate.  Handyman Petro shows a doggish devotion to Lenora (Anne Nagel), the daughter of misguided experimenter Cameron (Zucco). Still, Cameron isn't a standard "heavy father," which might signal some Oedipustuff. In fact, Cameron seems quite content that his daughter has a best beau. The scientist's only issue is that the beau happens to be a reporter, who endangers the experiment by nosing into certain murders committed by a marauding werewolf.

Sociologically, Cameron's motive for making werewolves is the film's most interesting touch: he has the idea that he's going to create an army of werewolves to hurl against the Axis enemy. Unfortunately, though Zucco gives a crisp and well-mannered performance, he doesn't have the chutzpath to sell the idea that Cameron's crazy enough to consider his idea a sound military strategy.
Posted by Gene Phillips at 12:05 PM
Email ThisBlogThis!Share to TwitterShare to FacebookShare to Pinterest
Labels: the marvelous