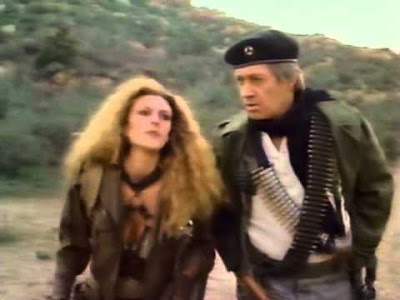 There are probably a few post-apocalyptic flicks worse than Fred Olen Ray's WARLORDS, but it probably would still make the list of the ten worst. The nicest thing I can say about the film is that star David Carradine is at least in better physical shape than he was for a similar effort ten years' previous, the soporific DEATHSPORT.

I don't see any mention of WARLORDS being connected to Roger Corman or any of his companies, but director Ray-- who in one online interview calls Corman his "role model"-- certainly crafts his future-flick with all the elements Corman relied on over the decades: fast cars, lots of gunfire, a smattering of tit-action (just enough that it can be snipped out for sale to broadcast television if possible), and the occasional rape-attempt. Ray, whose best film IMO is 1988's HOLLYWOOD CHAINSAW HOOKERS, stitches together all of these elements into a tedious concoction, aided by writer Scott Ressler, a cameraman with a whole TWO writing-credits on IMDB.

It's another post-nuclear desert-film, which means we never see what's happened to the big cities and their inhabitants, only a smattering of people wandering around the wide open spaces. It's a small blessing that we don't get the usual "Mad Max" schtick of the wandering hero who helps some settlement fight off bandits. Instead, the heroic Dow (Carradine) is looking for his wife, taken prisoner by a warlord known as "The Warlord" (Sid Haig). But wait, there's a complication. This is not the same Dow who distinguished himself in the wars that devastated the world, as a helpful interlocutor explains. This is a clone of that other Dow, one who is also some kind of "super-soldier," though as I recall the only "super" thing he does is survive getting shot down.

Being a clone, how is it that New-Dow remembers the beloved wife of Old-Dow? The script does not explain this tidbit, but the fact that New-Dow is so devoted to his lost wife proves like catnip to a skeezy young female scavenger, name of Danny (Dawn Wildsmith, real-life wife of Ray). Though she seems a fairly tough and independent woman, Danny attaches herself to Dow's quest for no stated reason, though implicitly she's warm for his form.

There's a lot of low-rent action, and an unsurprising conclusion to Dow's quest, and then it's over. Wildsmith, by the way, gets to dress in slinky leather outfits while she's being menaced by a potential rapist, so that's at least diverting. A few lines here and there are amusing-- Danny tries to discourage her rapist by telling him she has bad breath-- but you can more seriously wacked-out dialogue in the Italian Max-imitations, so that's not much of a recommendation.

Posted by Gene Phillips at 1:57 PM
Email ThisBlogThis!Share to TwitterShare to FacebookShare to Pinterest
Labels: combative adventures, the marvelous