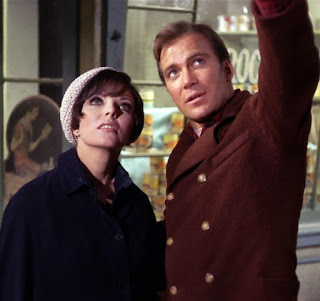 It's difficult to say something new about "City," one of the most acclaimed episodes of STAR TREK, and there seems to be no need to recapitulate most of its well-known narrative. Considering that the show's previous time-travel outing was so mediocre, I'm tempted to credit the dramatic excellence of "City" to primary writer Harlan Ellison. Certainly much of his prose work focuses on the difficulty of persons being able to recapture or understand the past-- a very different concern from Roddenberry's concern with seeing humanity in Spengleresque terms of cyclical barbarism and civilization.

A couple of ironies: the title is one of the few that refers to nothing extant in the script. In one of Ellison's early scripts, the crewmen of Enterprise were supposed to find a whole city on an alien planet, not just one free-standing alien artifact. Patently the city was cut to avoid needless expense. In addition, Ellison's script seems to have followed the example of other stories that initiated trouble by exposing the starship to some massive cosmic disturbance. However, by the end of the episode nothing has been done to prevent the Time Guardian from continuing to unleash waves of temporal distortion. The reason for this, like the complementary difficulty of having a crewman accidentally suffering from a drug overdose, was apparently that Ellison cared less about the fine points of the story than its dramatic arc.

The interaction of the time-guardian and the overdosed crewman-- McCoy, a doctor who gets too much of his own medicine-- causes the total erasure of the Federation's history. Kirk and Spock leave the rest of their landing-party on the Guardian's planet in order to go back and "fix" the time-stream. By so doing, the two future-men get their first look at the chaos of Depression-era America, one of the periods of economic upheaval that Roddenberry's "perfect future" was designed to solve.

Eventually Kirk and Spock learn that their friend McCoy altered a pivotal point in American history by saving the life of a religious reformer, Edith Keeler. But by a joke of destiny, Kirk falls in love with Edith. In a climax every TREK-fan knows by heart, Kirk is obliged to sacrifice Edith to return the universe to its status quo.

I've never read Ellison's treatments for the episode, prior to its re-writing by other hands. I've seen critics assert that it's just as good a script as the finished episode. This may be true, but without going into great detail, I'll say that I didn't care for what I heard about Ellison's original climax, which did not involve the captain allowing Edith to perish in a street-accident. Still, I feel that whoever conceived of the televised conclusion showed a superior sense of the Greek idea of Necessity: of the knowledge that the universe makes demands on mortals that cannot be set aside or contravened.

This was the penultimate episode of the first season, and, given that it shows James Kirk deeply in love with his female lead, I should note that up to this point Kirk was portrayed as a Serious Young Man, rather than the Cosmic Bladesman he became in later seasons. Kirk has indubitably had some romantic liaisons in his past, referenced in "Shore Leave" and "Court Martial," and there are some fuzzy suggestions of an aborted romance in "Dagger of the Mind." But none of these relationships portray Kirk as a Don Juan, and of course he's generally the soul of propriety around the comely Yeoman Rand and the somewhat juvenile Miri. The only times Kirk really turns on the charm, and thus gives rise to the Don Juan image, are in two episodes where he's using his charm for the purpose of justice: trying to confuse Andrea, one of his captors in "What Are Little Girls Made Of," and sparking Lenore in "Conscience of the King" in order to gather more information on her father.  True, practical concerns also figure into other episodes in later seasons, but more and more Kirk tended to lose his "Serious Young Man" demeanor in favor of being "the Playboy of the Federated Planets."

Posted by Gene Phillips at 2:34 PM
Email ThisBlogThis!Share to TwitterShare to FacebookShare to Pinterest
Labels: combative dramas, the marvelous