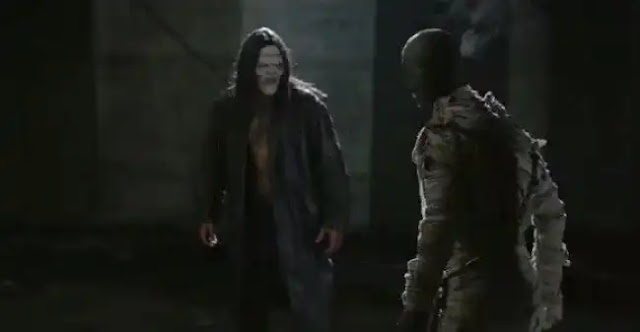 I'm ambivalent about this monster mashup, courtesy of writer-director Damien Leone. On the negative side, the film-- which I'll call VS. so as not to give either of the co-equal monsters favorable treatment-- suffers from a lot of slow, indulgent exposition, without any attempts to enliven the proceedings with good character bits or even a little lame humor. On the positive side, VS. feels like a labor of love from a "monster kid" who gives almost all of his creative attention to the task of reviving not one but two classic monsters, albeit in simplified form.

As in many previous monster mashes, it's axiomatic that there must some common element that brings together the diverse creatures. In this case, the common element is a modern university where two scientists bring their hellspawn, each entirely unaware of the other's project, for all that the two of them are dating. Of the two unwise dabblers in forbidden lore, Naihla Khalil (Ashton Leigh) is at least a non-mad scientist. When she brings the mummified corpse of the obscure pharaoh Usekare to the college grounds, she has no reason to believe that the mummy has any power to reanimate, and when the bandage-wrapped behemoth does revive, he does so by taking over the mind of a pawn, another university professor.

In contrast, the modern-day incarnation of Victor Frankenstein (Max Rhyser)-- for once, not linked to any famous ancestor-- isn't just an obsessed seeker after the unknown, like the original Shelley character. He's a full-fledged A-hole, closer in spirit to the Peter Cushing version from Hammer. Victor's first seen paying off a scuzzy guy to harvest body parts for his secret man-making project, and later he kills the body-thief and uses that guy's corpse to finalize his project. What Victor cobbles together was consciously modeled on artist Bernie Wrightson's comics-adaptation of the Shelley novel, but otherwise the monster doesn't have any other connection to the original creature. Instead of the "tabula rasa" monster seen both in the book and the 1931 film, this Frankensteinian freak really just has the consciousness of the body-snatcher, and he only spares his creator's life so that Victor will create a new body for him.

Early in the film Victor and Naihla discuss their respective orientations-- those of science and of religion/magic-- but Leone never follows through on this notion. Nor does he get much mileage out of the fact that the Monster and the Mummy have opposite desires-- one wanting a new body, the other desiring to have his soul liberated from his crumbling corpse. In place of even half-decent melodrama, we get a lot of running around and occasional gory murders, and not much more--

Except for the inevitable squaring-off of the two freaky fiends. Though it doesn't last any longer than the classic battle from FRANKENSTEIN MEETS THE WOLF MAN-- it's far more violent and visceral. The monsters don't just hit each other, they bite and claw and tear limbs off. And at least part of the reason that the big climax works for me is because the Mummy always got short-changed in the mashup department, having been written out of HOUSE OF FRANKENSTEIN and passed over in the other two Universal crossovers.

Posted by Gene Phillips at 3:40 PM
Email ThisBlogThis!Share to TwitterShare to FacebookShare to Pinterest
Labels: combative dramas, the marvelous