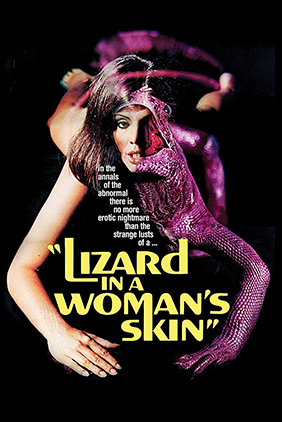 I insert the SPOILERS line because I'm going to mention the solution to this giallo's "mystery." Arguably the association of an animal with a female human gives the game away, though, since the only major female character in LIZARD is the viewpoint character.

Carol (Florinda Bolkan) is the wife of a respectable London attorney and daughter of a respectable politician. However, as if to signal her discontent with her life within the status quo, Carol confesses to her psychiatrist that she has intense erotic dreams about her loose neighbor Julia. Later Carol dreams that she kills Julia in the presence of two drug-addled hippies-- and then she finds out the next day that Julia is really dead. There follows a typical-for-giallo phantasmagoria of wild sequences-- dogs being disemboweled, a swarm of bats-- while Carol appears to play detective. But it's no big surprise when Carol is revealed to be the conscious killer, not so much trying to solve the mystery as seeking to cover her tracks.

LIZARD's director and co-writer Lucio Fulci had previously helmed a 1969 giallo, PERVERSION STORY, which I have not seen. That said, whle watching LIZARD I couldn't help but feel that he was biting Dario Argento's style. Like Argento's breakthrough film THE BIRD WITH THE CRYSTAL PLUMAGE, which made it to theaters roughly a year prior to LIZARD. Fulci's film seems to share some of PLUMAGE's concerns with psychological aberration and quirky street-people-- but whether or not Fulci sought to make his film resemble Argento's work, I don't think he brought any individual style to his use of these giallo elements. Bolkan carries most of the film despite the casting of familiar faces like Leo Genn, Stanley Baker and Anita Strindberg, but because Carol seems to be such a stock character, the actress doesn't have much to work with.

Posted by Gene Phillips at 2:58 PM
Email ThisBlogThis!Share to TwitterShare to FacebookShare to Pinterest
Labels: perilous psychos (u), the uncanny