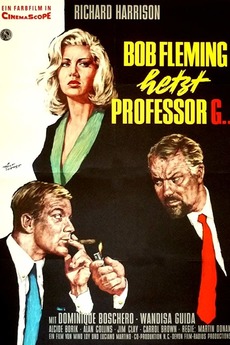 This early Eurospy entry, the first featuring a hero sometimes dubbed "Bob Fleming" (Richard Harrison), and was followed by one sequel, KILLERS ARE CHALLENGED. As is often the case, the first entry in the series may be a little on the small-budget size, and the sequel gets a little more money for developing oddball spy-devices. FIREBALL, however, doesn't get anything but a pipe from which a killer can shoot tiny darts to kill a target.

Most of the movie is routine spy-stuff, as Fleming jaunts about Europe, tracking a microfilm filled with science-secrets left behind by the scientists, assassinated by Russian agents. (Oddly, that same year the Bond films started playing down Russian villainy by playing up the apolitical menace of SPECTRE in THUNDERBALL-- whose name FIREBALL probably borrows from.)

There's nothing either fiery or thunderous about this routine spy-thriller as directed by Luciano Martino, who distinguishes himself with a half-dozen strong giallo films later. FIREBALL merely ticks off all the expected categories-- car chases, short fights, and Euro-babes, the latter played by good girl Dominique Broschero and bad girl Wandisa Guida. Harrison is OK as the suave Bondian hero but like many other Eurospies the writers can't be bothered to think up a half-decent villain (Professor G? Was there a guy with that name in the English dub?)

This one is purely of historical interest, nothing more.

Posted by Gene Phillips at 3:47 PM
Email ThisBlogThis!Share to TwitterShare to FacebookShare to Pinterest
Labels: combative adventures, diabolical devices (u), the uncanny