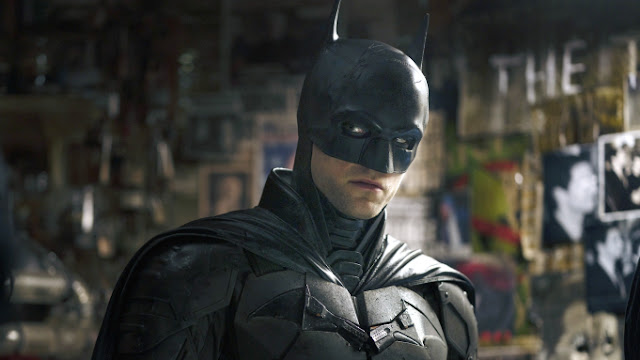 It wasn't that much of a surprise to see the 2019 JOKER reinterpret Batman's arch-fiend as a dramatic figure, once it was made clear that that film's makers were presenting a sort of "alternate-Earth Joker" who shared a few elements of the Bat-mythos but otherwise was a new creation. THE BATMAN, however, may present twists of favorite characters or on the Bat-origin, but to all intents and purposes this is still a take on the canonical Batman, courtesy of director/co-writer Matt Reeves. Yet unlike most Batman productions, it's not a high-spirited adventure, but a moody drama, almost an implicit answer to Martin Scorcese's recent criticism of superhero films as "amusement park rides."

Like both the 1989 BATMAN and BATMAN BEGINS, this film begins with the hero near the outset of his career. This time the Batman (Robert Pattinson) has been operating in Gotham for two  years, and though he's become friends with police lieutenant (and future commissioner) James Gordon, the rest of Gotham's constabulary deeply distrusts the costumed vigilante. But when a masked maniac called The Riddler kills one high-class victim and threatens to murder others, GCPD is forced to tolerate the Batman, In fact, rather than allowing the hero to play will-o-the-wisp so that he never gets close to the cops, Reeves devotes several scenes to showing the tension as the masked manhunter moves amid lawmen who would dearly love to capture and unmask him.

Gotham, as always, harbors corruption in high places, but while the bad apples are the exception in many Bat-narratives, in this film the corruption is almost a way of life. All of the Riddler's targets are rich politicians who profit from a hand-in-glove partnership with Gotham's crime families, headed by Carmine Falcone (John Turturro) and his right-hand man Oz, a.k.a. The Penguin (Colin Farrell). The Riddler's clues force Batman and Gordon to seek out an unknown informant who can cause the whole house of cards to collapse. During the Batman's investigations, he encounters a karate-kicking lady cat burglar (Zoe Kravitz), known as Selina Kyle but never called "Catwoman." Selina has her own agenda in pursuing Falcone but temporarily works alongside the Bat, with some of the expected romantic chemistry.

Despite the fact that Pattinson's Batman is easily the most acrobatic, fight-savvy live-action Batman ever, the film is not set up to deliver the usual blend of violence and spectacle found in most superhero films. And despite the fact that much of the narrative focuses on the Riddler's continued predations, the film also doesn't have the feel of serial-killer thrillers like SEVEN or SILENCE OF THE LAMBS. The only popular genre to I can fairly compare Reeves' brooding pace is the genre of the naturalistic spy movie. This more dramatic version of Batman exists not in a wild Wonderland where villains play manic games with heroes amid giant-sized displays, but in a forbidding demimonde in which no one's word can be trusted and almost everyone conceals dire secrets-- usually involving the rich preying upon the poor. Yet despite this familiar trope, BATMAN never indulges in the petty Marxism of Christopher Nolan. Selina does have a line about "privileged white assholes," but since this Catwoman is the offspring of Italian mobster Falcone, the remark seems purely personal in nature, rather than an opportunity for the script to virtue signal.

Reeves' vision of Gotham's crime-riddled cosmos is so dark that the film verges on becoming an irony, a type of narrative in which all action is fundamentally pointless. For instance, Batman eventually learns that his own example of vigilantism inspired the Riddler's career, and learns that his father and mother may have been murdered not as innocent holdup victims, but because of the father's implication in the Gotham crime-world. Yet Batman, Gordon and Selina are still able to perform heroically, even in a world where heroism is extremely compromised, which IMO means that this version of the Caped Crusader conforms to the form of the drama.

There's a bracing quality to seeing fabulous characters like Penguin and Catwoman handled in this fashion, but from the first years of the comic book, they existed in a world of fantasy, not reality. Accordingly, this is also one of the few Batman-movies in which neither the hero nor the villains utilize any fantastic super-science. Batman has a handful of uncanny weapons-- his armored costume, a glider-suit, a smoke bomb, and a Batmobile that can be driven electronically (albeit only for a short distance), while the Riddler, who certainly commits his share of bizarre crimes, is confined to such mundane devices as firearms, explosives, and an unusual type of bludgeon that later becomes a major clue to his culminating scheme. Only at the film's conclusion does THE BATMAN make substantial use of spectacle. Yet the spectacle serves the purpose of re-orienting Batman's goals away from his stated desire for "vengeance" and toward the pro-social value of altruism.

There are assorted small complaints about the script-- Riddler's motive, when revealed, is not satisfying-- but overall it's a strong film. Yet I don't have a burning desire to see another one in this universe, in part because I doubt Reeves could top himself, in part because I think Batman's involvement in the tropes of uncanny and marvelous phenomenality run too deep for any one cinematic success to overturn.

Posted by Gene Phillips at 5:19 PM
Email ThisBlogThis!Share to TwitterShare to FacebookShare to Pinterest
Labels: bizarre crimes and crimefighting (u), combative dramas, diabolical devices (u), the uncanny