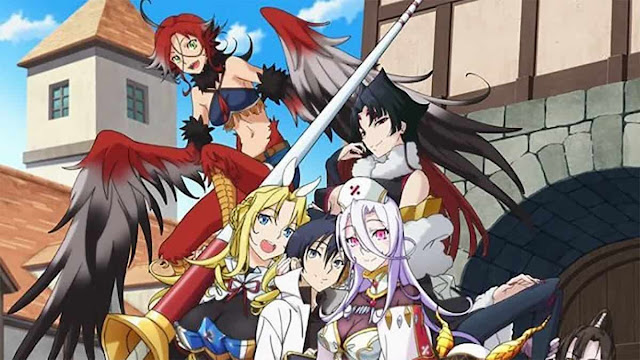 This 12-episode teleseries is based on a 2016 series of light novels. If "harem comedy" is a subgenre, then MGD belongs to a sub-subgenre one might call "monster-girl harem comedy." I imagine the original novels took some inspiration from 2012's manga-series MONSTER MUSUME, though MGD takes place in a fantasy-future, at a time when humans and monsters have learned to live together after many years of conflict. (Despite being in the future, everything looks like it takes place in medieval Europe.)

The main character of MGD is a little less of cipher than the usual male center of the harem. He's Glenn Litbeit, a handsome young doctor who specializes in treating monsters in the town of Lindworm. Somehow, though, he never seems to get any male customers, and all of his female patients instantly fall in love with him. Naturally all of the monster-girls are stunning, even the "loli" character-- albeit most are only good-looking from the waist up, since their hindquarters are theriomorphic (a half-horse, a half-spider, at least two half-serpents of different species). There are a couple who aren't half-animal, like a zombie girl and a giant girl, but one is forced to wonder how if at all sexual congress might be achieved under the former circumstances. For his part, Glenn seems merely bemused by all of the romantic attention, and he remains staunchly professional in his dealings with the horrific honeys, including the one closest to him, his nurse Saphee the Snake-Woman.

Since there's no real sex here, not even of the soft-core variety, the romantic-comedy stems largely from misunderstandings that come about whenever the good doctor becomes intimate in his examinations of his patients (some of whom become positively turned on by Glenn's attentions). Jealous Saphee is usually the one to remonstrate with the doctor by squeezing him in her coils, but Glenn stoically carries on with his ministrations. In contrast to MONSTER MUSUME, MGD is pretty clever about finding reasons for Glenn's harem-- often the lady centaur, the harpy, and the mermaid-- to keep crossing the doctor's path for one reason or another, since in this case the members of the harem don't all live or work together.

The sociological theme of the different species living together is nothing special, but the scripts excel at figuring out particular maladies for Glenn to treat. Since these monsters are all fully organic and not supernatural as such, they're vulnerable to diseases or dysfunctions of their particular species. I wouldn't say any of these cosmological themes rise to the level of high mythicity, but I enjoyed them as much or more than the romantic byplay. There are a few episodes in which the powerful monster-femmes use their talents in combative fashion, but on the whole the series is subcombative in being far more focused upon Glenn's brilliant medical deductions.

There has been talk of a second season for MGD, but none has as yet materialized.

Posted by Gene Phillips at 12:55 PM
Email ThisBlogThis!Share to TwitterShare to FacebookShare to Pinterest
Labels: the marvelous