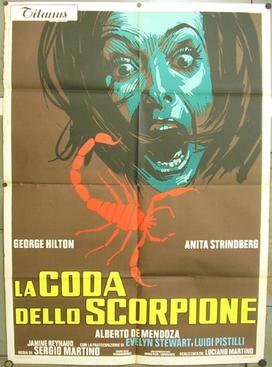 Here's a rarity: a giallo in which the actions of the mysterious black-gloved killer actually make sense when his identity is finally revealed, and one in which the police actually follow use logic to follow the revealing clues, rather than simply blundering upon the truth as if guided by intuition (or by contrived scripting).

After an older man perishes in an airline disaster, his wife Lisa receives a generous insurance payoff. Both the police and an insurance investigator, Peter Lynch (George Hilton) suspect that Lisa, perhaps with the help of confederates, arranged her husband's death to collect the insurance. But then a black-clad man murders Lisa. Peter, the cops and a comely lady journalist (Anita Strindberg) then must answer the question: does Lisa's murder mean that she was innocent, or did one of her co-conspirators knock her off? And what happened to the insurance money she collected? Other people perish in gory deaths, mostly but not exclusively pretty women (particularly Janine Reynaud), and there seems to be no common factor linking the murders.

In this case I won't reveal the killer's ID, since it doesn't affect any discussion of the psychological motivations or the phenomenality. The killings orchestrated by director Sergio Martino are very basic slash-ups, not as inventive as those of Argento, but then, the killer's principal motive is money-- though one of his almost-victims repeatedly calls him mad, so I've assigned him marginal status as a perilous psycho. Martino makes both the picturesque scenes and the talking-head sequences appealing with his lively camera. As for the "scorpion's tail" of the title, it embodies an important clue but lacks any significant symbolism as such.

Posted by Gene Phillips at 3:13 PM
Email ThisBlogThis!Share to TwitterShare to FacebookShare to Pinterest
Labels: outre outfits (u), perilous psychos (u), the uncanny