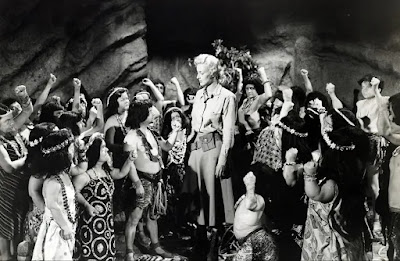 If MST3K had ever riffed on any of Johnny Weissmuller's JUNGLE JIM films, PYGMY ISLAND would have perfect for that show's humor. "Wow, another exciting walking-around-in-the-potted-plant-jungle scene!" Not to mention any number of little-people jokes that I won't even attempt to conceive.

The only halfway-interesting part of ISLAND are the scenes in which Jim and the other regular-sized characters share screen time with a tribe of "white pygmies." Most weird cultures that show up in fantasy-versions of Africa get transplanted to the Dark Continent because their ancestors get shipwrecked or something. But what in the world is supposed to have produced a tribe of white pygmies in Africa? Not surprisingly, no character in the script even takes a shot at explaining their provenance-- though the real explanation would be that most of the working little people in Hollywood-- Billy Barty, Billy Curtis, and an unbilled Angelo Rossito-- were white.

Part of ISLAND is the usual "white American lost in the jungle" trope, which means that Jungle Jim is called upon to find the missing person-- in this case, a female Army officer, Captain Kingsley (Ann Savage). She's taken in by the white pygmies, but though Jim doesn't know this at the film's opening, he does attest to Kingsley's superior officers that the pygmies just happen to possess a uniquely durable type of vegetable fiber, so durable that it would be a military asset. (This type of slightly novel plant-growth fits the same category of "exotic lands and people" as does the pygmy tribe.) So the task of finding a missing woman is made positively patriotic since the quest will also put greater resources in the hands of the United States.

To provide conflict, some enemy agents-- presumably Communists but never so identified-- infiltrate the land of the white pygmies. For a few minutes the agents try to intimidate the pygmies by dressing up in the costumes of an infamously formidable tribe of warriors, "the bush devils." This masquerade gets dropped early on, even before Jim tells his army contacts that the "devils" must be phony because the impostors wear boots.

There's barely any action worth mentioning, no good villains, and not even a slight romantic spark between the hero and his leading lady. This may be the dullest film in the series. The only part that woke me up a little comes toward the end. The pygmies, having saved Jim from the Commies, pledge that the Americans can take their wondrous fiber any time they want, as part of a "good neighbor policy." Yeah, because the first one worked out so well...

Posted by Gene Phillips at 3:56 PM
Email ThisBlogThis!Share to TwitterShare to FacebookShare to Pinterest
Labels: combative adventures, exotic lands and customs (u), phantasmal figurations (u), the uncanny