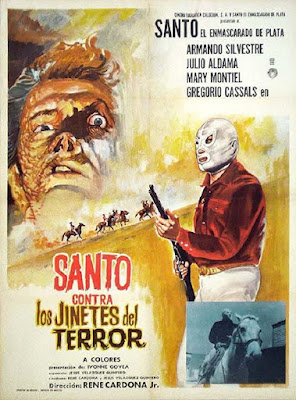 After seeing Santo duel so often with monsters and mad scientists, it's interesting to see a flick in which he's the only metaphenomenal presence.

In some backwater part of Mexico, a local town is obliged to share the territory with a colony of lepers. The era is unclear but at this point in time the treatment of sulfa drugs has just been recently introduced, because at the film's end Santo advises the locals that leprosy can be controlled if not cured with such medications.

Prior to Santo's arrival in the area, the regular tensions between the town and the colony are exacerbated when the lepers flee their confines. Despite the enlightened attitude of the sensible lawmen and a compassionate doctor, the people fear that the lepers are highly communicable. To make matters worse, a gang of bandidos make common cause with the lepers to help spook their victims. Santo, who shares the forward-thinking views of the modern era, battles not only the bandidos but also the town's prejudice. The lepers, though they're sources of horror to the townfolk, are handled as ordinary suffering human beings.

There aren't many fight-scenes here, so that despite the pro-social message RIDERS is somewhat dull, except for the novelty of placing Santo in a relatively realistic situation. Allegedly director Rene Cardona filmed some spicier scenes for a more adult version of the film called "The Lepers and Sex," which might have added some excitement but probably detracted from the message.

Posted by Gene Phillips at 11:35 AM
Email ThisBlogThis!Share to TwitterShare to FacebookShare to Pinterest
Labels: combative adventures, freakish flesh (n), outre outfits (u), the uncanny