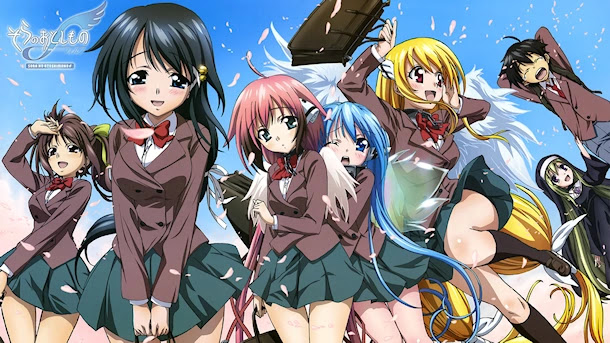 Occasionally I'll review an anime series that improves on a manga predecessor-- usually one comprised of more episodes than a teleseries budget will allow-- and I'll find that the shorter work does a better job of condensing the thematic thread of the series, given that a manga may tend to ramble somewhat. Such was the case with the one-season teleseries CHRONO CRUSADE in comparison with the longer series of the same name.

However, it's probably more common for a teleseries to fragment the narrative of a longer comics work and to leave out data that would have promoted the thematic substance. As I've not read the 2007-2014 manga given the English title of HEAVEN'S LOST PROPERTY, I'm just assuming that the author explained a lot of stuff left vague in the anime. Further, since the manga was still in progress when the two seasons of PROPERTY came out, it's axiomatic that the anime-makers wouldn't know everything that the mangaka had in mind. That said, I still think the adapters could done a little better outlining the basic parameters of their fantasy concept. All one really knows is that, somewhere above the mundane world of Sorami, a small Japanese town, exists a world called Synapse. From that empyrean, a winged woman falls to Earth, forever changing the life of teenager Tomoki Sakurai.

Tomoki is one of the many Japanese manga-teens whose parents have mysteriously split up but have left him the means to live on his own. Tomoki is at heart a decent fellow, but he's also a horndog of such proportions as to make Ataru Moroboshi seem like a courtly gentleman. In addition to keeping a collection of porn-mags, he's constantly on the lookout for opportunities to peek at girls' privates or to feel them up. The only slight brake upon his activities is his same-age neighbor Sohara, who also seems to get along with no parental supervision. Tomoki and Sohara have known one another since childhood, and though this sometimes signals a distanced sibling-complex, Sohara comes off more like a punishing mother, for she disciplines all of Tomoki's transgressions with murderous karate chops. To be sure, while his interest in her is purely physical, the girl cherishes both erotic and sentimental fantasies toward her classmate, and sometimes punishes him even for harmless manifestations of "guy-ness," like catching him in a display of "morning wood."

Then Tomoki sees a beautiful winged woman, Ikaros, fall from the sky. Ikaros claims that by succoring her Tomoki has become her master, and she moves into his residence, granting his most extravagant desires with super-technological "wish cards." Tomoki soon finds that fulfilling his wishes leads to many hassles, even without considering the violence Sohara wreaks upon his puny body. Though he sometimes gets boners in Ikaros' presence, he restrains himself from making any moves on her, a fact that irritates Sohara even more than his usual transgressions. Ikaros for her part seems incapable of affect, and this stems from the fact that she's actually an artificial being, an "Angeloid," and so has to learn emotion from lowly human beings. In contrast, two other cute but more emotionally expressive Angeloids, Nymph and Astraea, eventually join the party, so that as in most harem comedies the protagonist is practically tripping over boobs and butts every day, but not actually getting any sex. In the last few episodes of the second season, a fourth Angeloid, a sadistically minded battle-angel in a nun's outfit, also becomes drawn into Tomoki's merry harem, and one presumes that in the manga she like the other fallen angels also gets drawn toward Tomoki's problematic charms.

It's plain that there could be some serious ideas imbricated within the basic concepts, particularly that of free will, as when the androids rebel against their evil creator (also rendered as an angel, though presumably not an android). And there are some strong dramatic moments from time to time. Still, PROPERTY dominantly emphasizes wack-a-doodle sex comedy of the sort that Japanese manga artists do so much better than anyone else. Some of Tomoki's wild stunts include (1) summoning all the panties of the girls at school, which fly to Tomoki like hundreds of migrating birds, (2) changing himself into a girl so that he can peek on the girls' change-rooms, and (3) going to an indoor pool so that he can change himself into pool-water and grope the girls with his watery fingers. Of course the females regularly clobber him for these acts, though to be sure Tomoki often gets abused even when he doesn't do anything.

There are a number of violent battles between the Angeloids, particularly when Ikaros, Nymph and Astraea take on the angel in the nun's habit. But like the later DATE A LIVE franchise, the fight scenes aren't crucial enough to tip this series into the combative mode.

ADDENDUM: I should further justify my comment about Sohara being a "punishing mother." There are probably dozens of manga/anime concepts where a young mortal female has to deal with her potential boyfriend playing host to a harem, and usually the regular girls don't have any maternal aspects. Since the other members of the harem parallel the mortal girl in terms of age, they're simply competitors for the desired male. The dissonant factor in PROPERTY, though, is the fact that Tomoki must assume a tutelary role in the lives of the three main Angeloids in the anime. All three have been implicitly abused by their unnamed Master, and Tomoki tries to teach them the casual, pleasurable customs of Earth-life to the angel-girls, trying to get Ikaros to laugh and teaching Nymph to like cotton candy. He usually does not grope the three of them as he does ordinary women, although Sohara frequently assumes that he intends to do so and so beats him up, as if he were indeed a nasty daddy taking advantage of his "daughters." Whether that puts Sohara more in the role of a wife than a mother remains an open question.

Posted by Gene Phillips at 2:12 PM
Email ThisBlogThis!Share to TwitterShare to FacebookShare to Pinterest
Labels: the marvelous