MACISTE IN THE VALLEY OF THUNDERING ECHOES (1964) 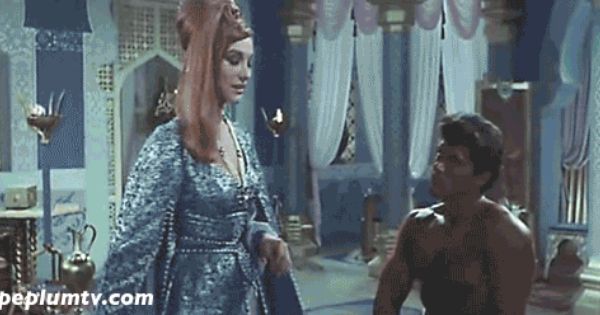 Though this Italian-made film was circulated under the title HERCULES OF THE DESERT, its mythology is that of the Maciste films. Maciste, rather than being rooted in any particular time and clime, tended to wander around history as the scripters' needs arose, a standout being his appearance in 15th-century Scotland in THE WITCH'S CURSE.

Prior to the appearance of the titular muscleman-- once again essayed by Kirk Morris-- there's conflict brewing in some vaguely ahistorical desert terrain. The good guys are essentially Bedouin Arabs, who may be Muslim but are not really hard-and-fast about it. This wandering tribe, the Gameli, believes that there exists a "land of green pastures" promised to them by a prophecy. However, the land lies in a valley that seems to be haunted by frightful specters who create a fearful racket, "the thundering echoes," so none of the Gameli want to pass into the valley. Further, like so many wandering tribes, they automatically draw hostile fire from the tribesmen of the big cities. One such walled city is ruled by ambitious Queen Farida (Helene Chanel), who plans to exterminate or enslave the Gameli.

The High Priest of the Gameli, though, knows how to call forth the sort of great hero they need as their champion. As reviewers before me have remarked, in most movies Maciste just wanders into trouble out of nowhere in particular. However, the scripters here must have felt like doing something with the putative meaning of his name, "born from the rock," for the High Priest performs a summoning-ritual in a cave, and lo, the biceped hero manifests out of the rocks therein.

Eventually, after Maciste kicks the asses of Farida's warriors-- and this is a Maciste with a Hercules-like level of power, unlike other iterations-- the hero wins an invitation to the queen's palace, where, like many evil queens before her, she enslaves him with her insidious potions. Naturally, there's a good-girl Gameli heroine (Spela Rozin) vying to rescue Maciste from the bad woman's clutches, and Rosalba Neri, also a renowed Euro-babe, rings in with a minor support-role.

Most of the action is just OK until the literally "bang-up" conclusion. Maciste ventures into the thunderous valley, where he finds that the "thunder" is being produced by a tribe of weird-looking guys beating on metal gongs or sheets of metal. Maciste whips them all, thus paving the way for the good guys to take possession of the valley, but the thunder-makers are never explained. Since they don't show special powers, one has to assume that they're mortals, perhaps using their phony thunder after the fashion of the Greek Salmoneus, hoping to pose as gods to unwitting mortals. Whatever the reasoning. this sequence is the most spirited one in the movie, exceeding even the sumptuous shots of Helene Chanel.

Posted by Gene Phillips at 2:29 PM
Email ThisBlogThis!Share to TwitterShare to FacebookShare to Pinterest
Labels: combative adventures, the marvelous