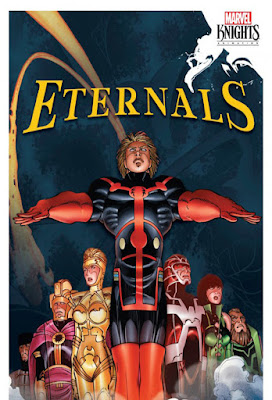 This adaptation of the Neil Gaiman-John Romita Jr. limited series, reviewed here, is for the most part faithful to the original. I don't know anything about the genesis of the project, or why it was divided into 10 segments of loosely 15 minutes apiece, though the segmentation doesn't hurt the storytelling.

Like WOLVERINE ORIGIN the adaptation reproduces the art of the original comic with extremely limited animation. Despite my high regard for the comic that gave birth to the cartoon, I called ORIGIN an "empty shadow show," largely because the comics-rendition offered a skillful fusion of art and dialogue that the animation entirely missed.

Strangely, though I didn't think the Gaiman-Romita comic was nearly as good as the Wolverine comic, the ETERNALS cartoon comes off somewhat better. Possibly that's because Gaiman's script was at base just your basic reboot of a property that had largely fallen by the wayside, so the story wasn't as ambitious from the get-go. In addition, the art of the 2006 ETERNALS comic amounted to Romita Jr. getting his Jack Kirby on, emulating the grandeur of the Kirbyscapes, albeit through what might be seen as a "Frank Miller filter," and this painterly art, which didn't emphasize movement as much as did the Wolverine art, didn't lose as much in translation to limited animation.

Posted by Gene Phillips at 10:19 AM
Email ThisBlogThis!Share to TwitterShare to FacebookShare to Pinterest
Labels: combative adventures, the marvelous