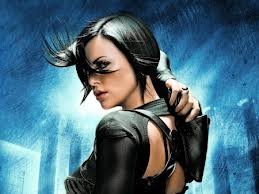 “We’re meant to die—it’s what makes anything about us matter.”—the titular star of AEON FLUX.


The original “Aeon Flux” cartoons, produced in the 1990s by Peter Chung for MTV’s “Liquid Television,” became popular with viewers chiefly through their feel of enigmatic unpredictability. The scantily garbed Aeon, an inhabitant of a far-future civilization, engaged in assorted obscure missions, sometimes including assassination, against the forces of city-ruler Trevor Goodchild, sort of a futuristic Nero, albeit rendered with more irony.  On occasion Aeon was “killed,” but came to life by the next episode.


I haven’t viewed the original cartoons—which I found pleasant, but hardly among my favorites—in many years. I don’t know what if any story-content the film borrowed from the cartoons, nor do I know whether or not I would judge the cartoon Aeon’s exploits to be more allied to the formal Fryean category of irony, or that of adventure.


There’s no such doubt in the case of this Aeon Flux-- directed by Karyn Kusama just after her writer-director breakout success with GIRLFIGHT-- and certainly no irony.  A quick summing-up tells us that in the very near future (2011, actually) most of the population will die off of a malady called “the Industrial Disease.”  The survivors of humanity now occupy a sole city called Bregna, ruled by scientist Trevor Goodchild , his brother Oren and an assortment of other government officials.  Their power is absolute, but the most distressing aspect of their rule is the way citizens mysteriously disappear.  Discontent breeds a group of rebels, “the Monicans,” and among their number is athletic super-assassin Aeon Flux.  She was apparently originally a citizen, for she keeps contact with her sister, a non-rebel named Una, but unlike Una Aeon chose to fight the power.


Aeon’s Monican superiors give the order to “hit” Trevor at last, and with her special skills she invades the ruler’s sanctum and fights her way to the supposed tyrant.  However, she finds herself unable to kill him, while for his part he recognizes her, calling her by a name, “Katherine,” which she does not know.  She escapes, only to find that her sister Una has been spirited away.


Following many rather low-energy adventures, Aeon learns the truth from Trevor: the original survivors of the plague were sterile. Trevor decided that, rather than allowing the human race to die out, he would keep it alive through cloning, but without the population’s knowledge.  A citizen would be harvested and killed as needed, and his DNA would be used to produce a clone-fetus, which would be introduced into the womb of a likely mother. Thus the population of Bregna has been recapitulated over seven generations, including Trevor himself, though each of his clone-rebirths is educated to become a new Trevor Goodchild.


Trevor meant for the clone-technique to serve as a stopgap until he found a cure to the sterility, but his brother Oren desires to perpetuate the Goodchild rule for eternity.  Moreover, Oren makes a discovery that he conceals from Trevor: real pregnancies have started to appear, as nature triumphs over the Industrial Disease.  Aeon’s sister Una was specifically harvested because she was one of these.  Aeon’s rebel allies cast her out for failing to kill Trevor, so that the heroine and her ally are almost alone, caught between the hostile Monicans and Oren’s corrupt hegemony.


The AEON film puts forth a tolerable but essentially routine iteration of the “ragtag rebels vs. corrupt rulers” plotline.  Direction and design never aspire to equal the stylish flair of Peter Chung’s cartoons, and the script lacks either Chung’s irony or even much in the way of comic touches.  There’s a very basic existential proposition suggested in the script, as seen by the dialogue-line cited above, to the effect that mortal humans were meant to die in order to make their limited lives meaningful.  However, it’s too heavy a thought for the banal script to support.


As for the less than compelling mystery of Aeon’s origins, she turns out to be a clone of Katherine, wife of the original Trevor.  Katherine became sick during the original crisis, but Oren, who feared her ability to influence Trevor, ordered her DNA destroyed for good.  Another member of the hierarchy defied that order and kept Aeon’s DNA for future use.  It’s not articulated as to why seven generations went by before Aeon was re-created, or why her insider-ally didn’t tell her any of her complicated history.


Most unforgiveable in an adventure-film, the action-sequences are perfunctory at best.  Theron, a skilled actress, can’t be faulted for not giving audiences the captivating, insouciant Aeon from Chung’s cartoon.  But she plays the role emphasizing the character’s emotional vulnerability, and so isn’t able to bring any real heroic mojo to the role, compared to (say) Milla Jovavich in the RESIDENT EVIL films.  Theron's best moment is her astonishment when she sees her grown sister Una re-incarnated as a clone-baby.  But her scenes as a heroic “femme formidable” are far from standout.

Posted by Gene Phillips at 1:39 PM
Email ThisBlogThis!Share to TwitterShare to FacebookShare to Pinterest
Labels: combative adventures, the marvelous