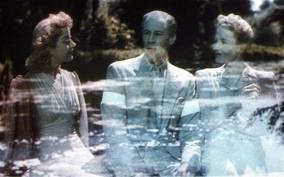 I was surprised to learn that although Noel Coward's original 1941 play enjoyed many successful runs, the 1945 film, directed and co-scripted by David Lean, proved a flop.

It's possible that the film's talkiness-- an unavoidable inheritance from its stage origins-- hurt it with audiences, but I can't see why.  Lean does his utmost to give the actors plenty of physical "business" to perform as they recite Coward's snappy dialogue.

The plot deals with Charles Condimine (Rex Harrison), a novelist who lost one wife, Elvira, to pneumonia seven years ago, but lives a pleasant if decorous life in his country-house with his second wife Ruth.  Early in the film both Charles and Ruth express their contentment with their dull lives, and Ruth professes not to mind the stories of Elvira's greater beauty and charm.

Charles is the one to upset the marital applecart.  Intending to research occultism for a possible novel, he invites local spiritualist Madame Arcati (Margaret Rutherford) to hold a seance at the country-house, with one other couple in attendance, and one maid named Edith (Jacqueline Clarke) serving.

The aristocrats manage to get through the seance without revealing that they regard Arcati as an entertaining fraud, and have a good laugh afterward about her babblings about "ectoplasm."  However, that very night, Charles receives a visitor no one else can see or hear: his first wife Elvira, looking radiantly green (both her gown and her skin), begins to haunt him.

Ruth naturally thinks her husband's going mad, until Charles convinces Elvira to give Ruth a demonstration of her reality.  Ruth attempts to get Arcati to banish the unwanted first wife but she accidentally discloses that Arcati was the butt of their patrician humor.  Arcati refuses to help.

Charles, for his part, seems to be very pleased to have two wives in his life, though there's no indication that he's getting sex from either one.  Given that Ruth tells Charles that he has a "hag-ridden" nature due to some unspecified influence from his mother, perhaps what Charles really enjoys is the surfeit of feminine attention.

Elvira, however, doesn't want to share Charles any more than Ruth does.  She plots to kill Charles so that his spirit will join her in the afterlife.  One will search SPIRIT in vain for the kind of TOPPER-style American emphasis on dutiful angels watching how ghosts comport themselves either in life or the afterlife!  However, Elvira's plan backfires and Ruth is killed instead, so that now Charles has two ethereal wives haunting his house.  It's a measure of the story's ability to "sell" us on the jolly world of the afterlife that all this talk of gruesome death seems like a romp in the park.

Charles doesn't like having two ghost-women in the house, and manages to convince the eccentic Arcati to do some ghostbusting.  As enacted by the incomparable Rutherford, Arcati's repeated failures are a feast of droll humor.  Yet things become quite eerie when she zeroes in on the cause of Charles' troubles: none other than the simple-minded, rather homely maid Edith.  Apparently-- and the film is vague on this point-- Edith seems to have nurtured some fascination with the vivacious Elvira, thus causing her to subconsciously summon Elvira from the other world. With Edith's help Arcati manages to banish Charles' two wives-- temporarily.

Accounts differ as to whether or not Charles escapes the influence of his phantom paramours in the play.  The movie naturally has the luxury of escaping the proscenium, though, so Lean is able to show viewers the full effect of the Husband's Taming by the Shrews.  Charles drives away from the house, but he fails to anticipate that his wives have conspired to tinker with the brakes on his car.  His body perishes, and he plunges in spirit-form right between his two ethereal inamoratas-- thus destined to be pleasurably "hag-ridden" for the rest of eternity.

In the early sound era of films Great Britain didn't exactly offer a bounty in the horror genre.  Nevertheless, despite the light tone of this British ghost story, it shows quite a bit of intelligence as to the "rules" of the medium-game, comparable to the sort of rigor one finds in classic ghost-story authors like M. R. James and Algernon Blackwood.  It's an interesting coincidence that one of the most well-recognized "straight" British horror films-- DEAD OF NIGHT-- also hails from this pivotal year.

Posted by Gene Phillips at 3:13 PM
Email ThisBlogThis!Share to TwitterShare to FacebookShare to Pinterest
Labels: the marvelous