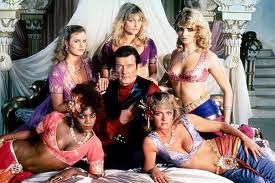 Roger Moore's next-to-last outing as 007 does a 180-degree turn away from the comparative realism of the previous entry, FOR YOUR EYES ONLY.  OCTOPUSSY thus moves back toward the more playful concept of James Bond as secret agent/bon vivant that appeared in the first Moore flick, though OCTOPUSSY is not so obtrusive in its attemtps at comedy.  Still, given that Moore showed that he could play Bond as a semi-ruthless professional in SPY WHO LOVED ME, it's a shame Eon's scripters didn't shoot for that goal a little more often.

As other accounts have mentioned, Eon had considered other actors for the role, but persuaded Moore to return as an antidote to the competition of Kevin McClory's competing Bond-film NEVER SAY NEVER AGAIN.  Interestingly from my standpoint as a trope-analyst, Eon chose to fight one "bizarre crime" (the nuclear blackmail of McClory's THUNDERBALL reenactment) with another, equally bizarre endeavor.  Coincidentally or not, OCTOPUSSY also deals with a private conspiracy involving a nuclear device, though in the Eon film a nuclear explosion is meant to serve the far-fetched end of bringing about European nuclear disarmament.

Nevertheless, as I've commented before, most viewers expected larger-than-life perils from James Bond films, so Eon may have decided to get away from the realism they'd encouraged in EYES.  The script ironically uses elements from some very naturalistic Fleming stories, for it does, in the words of Wikipedia, 'include a portion inspired by the Fleming short story "The Property of a Lady" (included in 1967 and later editions of Octopussy and The Living Daylights), while the events of the short story "Octopussy" form a part of the title character's background and are recounted by her.'

The film is a trifle oblique as to how villain Kamal Khan (Louis Jourdan)-- known to British Intelligence as a minor trader in antiques-- becomes involved with the film's secondary villain, hard-line Soviet General Orlov (Stephen Berkof). In any case, because Kamal has a business affiliation with big-time smuggler "Octopussy" (Maud Adams)-- a woman who uses traveling circuses to smuggle artifacts from country to country-- Kamal and Berkof employ her smuggling-pipeline to send a nuclear bomb into an inhabited German city.  There they plan to detonate it, thereby to impress upon Europe the need for universal disarmament.  Hard-liner Orlov believes that this disarmament will lead to total Soviet triumph in Europe.  The film, however, makes clear that Orlov is a dinosaur in the 1980s era of detente, which is as far as the sociological myth-making of this film goes.

Given that so many of Fleming's books concern former British possessions that have gone on a rampage since gaining their freedom, it's surprising that Fleming never gave Bond an adventure in India, often regarded as "the jewel in the crown" of the British Empire.  But on re-consideration, though Fleming seems positively encyclopedic in his knowledge of Europe from the British Isles to the USSR, his novels give no sense that he knew, or wanted to know, anything of Asia.

The filmmakers don't allude to the former status of India as a British possession; one gets more sociopolitical content from the conflict between English Bond and Irish Red Grant in FROM RUSSIA WITH LOVE.  OCTOPUSSY's India is just a catalogue of "exotica" motifs: having Bond pursued as part of a "tiger hunt," having Bond encounter various fakir-trickery amidst a fight-scene, such as sword-swallowing and a bed of nails.  Not that the Germans fare any better in their part of the film: Bond, given a ride to his destination by some jovial Germans, has to fend off the threat of being fed German sausages.

The closest OCTOPUSSY comes to making a new literary myth is the character of Octopussy herself.  In the Fleming short story, "Octopussy" is a nickname given to a real octopus by a man named Smythe, who is guilty of having killed a friend of James Bond.  Bond tracks Smythe down, but rather than taking him into custody, allows Smythe to take the gentleman's way out.  In the film, the nickname "Octopussy" is one Smythe gave to his daughter-- which certainly raises one's eyebrows as to their relationship. However, though the film keeps the substance of the short story, with Octopussy relating how Bond allowed her father to off himself, Octopussy bears no grudge and is glad Bond gave her father the chance to spare himself public shame.

There can be little doubt that the scripters of this film had "Pussy Galore" of the GOLDFINGER book and film in mind when they concocted the female artifacts-smuggler Octopussy.  For no clear reason, Octopussy has assembled a small female army around her, most of whom are Caucasians who were wandering the Indian subcontinent in search of "enlightenment" before falling in with the female smuggler.  This "femforce" certainly recalls the all-female aviatrix group associated with Pussy Galore in both the book and the film of GOLDFINGER.  However, there's never any intimation that Octopussy might swing in a Sapphic direction, or even both ways. She makes a remark about "sisterhood" that might imply some criminal version of women's lib, which also resonates fairly well with the book version of Pussy Galore.  However, though Maud Adams is sexy in the role, Octopussy as a character is much less memorable than either the book or film versions of the GOLDFINGER girl. There's a minor attempt at visual symbol-play between the octopus and female genitalia, but it's rather clunky and obvious.

By this time Moore had already expressed a desire to walk away from Bond, so it's not surprising that he looks a little bored at times.  I've complained earlier that Moore's Bond could be "clownish."  Ironically, Moore's best scene in OCTOPUSSY appears in a scene where he must infiltrate an ongoing circus-performance to disarm a bomb, and does so dressed-- as a clown.  Moore's desperate attempt to get to the bomb despite the interference of the regular performers is more interesting here than Bond's normal derring-do stunts.

I found most of Bond's stunts less than exciting, except for one in which he has to jump from a car to a train.  The best stunt-scene in the film doesn't involve Bond, but focuses on Octopussy's female army as they overcome Kamal Khan's soldiers with a variety of clever fighitng-strategies.

Bond himself uses no special gimmicks in his fights, though Q demonstrates a few in a lab, none of which seem particularly useful.  The villains have one ingenious "outre device," as one henchman sports a weapon in the form of a razor-edged yo-yo.

The film's opening theme, Rita Coolidge singing "All-Time High," goes down in my books as the Worst Bond Theme Ever.


Posted by Gene Phillips at 12:59 PM
Email ThisBlogThis!Share to TwitterShare to FacebookShare to Pinterest
Labels: bizarre crimes and crimefighting (u), combative adventures, diabolical devices (u), the uncanny