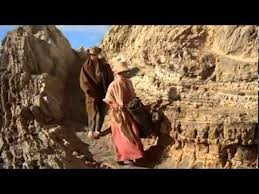 
“Nine Lives,” season one’s seventh episode (according to the order on the DVD set), virtually reprises the same plot-structure as the first, “King of the Mountain,” in which wanderer Caine gets enmeshed in the troubles of some unfortunate just long enough to help, before the relentless pursuit of bounty hunters forces him to depart for new horizons.


“Lives” is the first episode to have a substantial degree of comedy, as Caine finds himself obliged to help a man find a cat.  Mulhare, member of a mining-camp, sets off an ill-timed explosion that inadvertently kills the camp’s pet cat.  The camp exiles Mulhare until the Irish miner can find a replacement feline, and Caine elects to follow him in his quest.  Mulhare desperately wants to get back to the camp because he’s found a nugget that will yield him a rich strike, and he frequently runs off at the mouth about his dream of riches to the indifferent priest.  The duo stumble across a ranch run by a lone widow-woman, who happens to own a cat.  She’ll trade the cat if the two of them will dig her a well, which keeps Mulhare around long enough for a romantic interest to spark between the miner and the widow.


However, a family of bounty hunters follow Caine’s trail to the ranch.  They take Caine captive and search Mulhare.  One of them laughingly dismisses the miner’s nugget as iron pyrite, dashing the Irishman’s dreams.  In an amusing moment Caine manages to trick one of the hunters, who has bragged about his wrestling prowess, to engage Caine in a match.  Following a decent fight, which Caine naturally wins, the bounty hunters take flight. Mulhare loses interest in prospecting.  He briefly considers trapping Caine for the reward, but gives up his dreams of wealth for a new life with the widow.


One of the better flashback-meditations deals with the double-sided nature of “pain and pleasure.”  Caine’s only uncanny feat takes place in a medical context: the widow’s mare is foaling, but the foal is turned around in the womb.  Caine’s animal empathy allows him to calm the horse while Mulhare extracts the foal, making possible the survival of both mother and offspring.

“Sun and Cloud Shadow,” a wholly naturalistic episode, centers upon the theme of xenophobia once more.  Caine happens upon an old man named Ying on the outskirts of a mining-town.  Ying is one of a community of Chinese miners who moved into a played-out mine in a neighboring mountain, though the mountain technically belongs to the town’s richest man, Colonel Binns.  Ying invites Caine to stay with him, but first he must go into town to pay off a bill at the local saloon.  In the saloon Binns’ son Douglas makes trouble, insisting that the two teetotaling Orientals must drink his whiskey.  In the fight they ensures, Douglas shoots Ying dead.


Caine meets the late Ying’s daughter Cloud Shadow and his son as they claim their father’s body, and then follows them to their mountain-hideaway.  Ying's son, remembering how his people were treated as slaves before they started making money from the mine, wants to start a war with the whites.  Colonel Binns shows up at the funeral, taking no responsibility for the death and ordering the Chinese families to leave.  Ying's son persuades the others to buy guns for protection.


In addition, Cloud Shadow reveals her history to Caine. She was an unwanted child sold into slavery in China (just to remind audiences that China had its own set of evil practices), and shipped to America to be sold as a prostitute.  An American priest intervened and raised Cloud to be a nurse, but she was unable to find any work but that of a maid, which led her to Colonel Binns’s household.  Benz’s younger son David fell in love with her, and she with him.  The Colonel forbade any marriage, and David lacked the gumption to challenge his father.


The Chinese community appeals to Caine to be a go-between, to make peace with the Colonel in exchange for a tributary payment.  Binns is much like Ed Rankin of “The Soul is the Warrior,” a self-made man who holds his property with a gun, but he also claims to be a man of peace, perhaps because he values his position in the community.  After a dialogue that functions as an exchange of cultural views, Caine and the Colonel make a deal.   In an ironic note, hearkening back to the saloon-scene, Benz offers Caine champagne, which Caine declines in favor of tea.


However, that same night Ying's son kills Douglas. The Colonel isn’t content to bring the killer alone to justice.  Binns brings a formidable weapon—a mortar-shell cannon—to the mountain, demanding that the miners must either leave or yield up Cloud Shadow to be his son’s “pillow-girl.”  In addition, he reveals Caine’s presence to a pair of bounty hunters, one of whom is another martially trained “Manchu agent.”  Caine fights and kills the murderous agent as he did his opponent in the pilot movie.  David finally defies his father and swears to marry Cloud Shadow.  The Colonel retreats in fury, but it’s implied that whether or not he’ll accept his son’s marriage, he’ll cease menacing the miners for the sake of their profitable business arrangement.

“Chains,” another naturalistic story, begins with Caine once more on the trail of his half-brother.  Having somehow heard that his brother was working a claim with a man named Hantoon, and that Hantoon is being held in prison at a fort, Caine ventures into the fort to interview the prisoner.  He meets Sergeant Bedford, a greedy officer who recognizes Caine from his wanted poster.  The sergeant allows Caine to speak with Hantoon, a hulking, slow-witted fellow accused of murder.  Hantoon barely understands Caine’s desire to find his brother.  Bedford traps Caine in the jail and then forces him to be chained to Hantoon (hence the title).


Caine breaks them free in exchange for the befuddled giant’s promise to lead Caine to his brother.  Bedford follows, intent on claiming the reward.  During their travels Caine teaches the slow-minded man a sense of his own worth, despite the way so many normal people have called him an “animal.”  When Hantoon boasts that he can whip anyone who gives him insults, Caine remonstrates, “If you plant rice, you will grow rice.  If you plant fear, you will grow fear.”


The area is menaced by hostile Ute Indians, and the duo’s progress is further complicated when Hantoon takes Caine to the home of his brother-in-law, whom Hantoon believes guilty of murdering his sister.  Caine deduces that this accusation is a delusion born of his grief and takes him away again.  Eventually they arrive at the cabin Danny Caine once occupied, but Danny has disappeared.  Bedford overtakes them.  Caine subdues him, but then leaves to scout for the Indians.  The sergeant, greedy to claim the gold uncovered by the prospectors, persuades Hantoon to betray Caine by telling him that Caine’s a killer. Once again Caine manages to gain the upper hand.  Knowing that the hostiles are close, he takes Hantoon with him after fruitlessly trying to convince Bedford to come along. Bedford, busy trying to gather up the gold, is overtaken by the Utes,


Caine takes Hantoon to a nearby town, giving him the chance to seek a new life.  Instead, having somewhat absorbed Caine’s lessons on natural harmony, the “animal” elects to become a forest-dwelling “wild man,” devoted himself to caring for the beasts.  The story thus merges the images of the American savage—either an Indian, or a white man who lives like an Indian—with the image of the Asian in quest of natural harmony.
Posted by Gene Phillips at 2:10 PM
Email ThisBlogThis!Share to TwitterShare to FacebookShare to Pinterest
Labels: combative adventures, the naturalistic, the uncanny