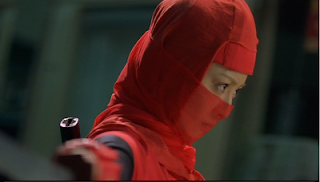 Kipling said, "East is East and West is West, and never the twain shall meet."  Little did he know that one of the greatest commonalities between East and West is their equal ability to make crappy ninja movies.

To be sure, Herman Yau's LETHAL NINJA isn't the bottom of the barrel.  The photography at least keeps things looking good, though I suspect that this is one of the most sedentary ninja movies of all time, probably in the interest of keeping production costs down.

The story starts with a villain known only as "Brian," who has hired a ninja clan to secure for him a wonder drug capable of curing nearly every disease known to man.  One of his ninjas makes the mistake of cutting off the head of the serum's inventor, before the inventor revealed how to open the impenetrable box containing the serum's secret.  However, Brian has a machine that can recapitulate a dead man's last memory.  He sends his ninjas to abduct a young man with the peculiar name of "Copy."  However, a good clan of ninjas comes to Copy's defense.

Despite the invocation of the "rival clans" trope, ninjas, lethal or otherwise, are not seen in great quantities.  Most of the story dwells on two female ninjas from the respective clans: Xiao Ling from the good side, Hibiki from the bad side.  When Xiao Ling defeats Hibiki, the good ninja-girl takes both Copy and the bad ninja into custody, apparently because the two clans used to be one.  Despite the fact that Hibiki is in love with the head bad ninja, she's persuaded to betray her bad masters.

The fight-scenes are pretty subdued for a Hong Kong action film, and the script by director Herman Yau suggests that he had more interest in the sentimental scenes in Xiao Ling's ninja village.  At best LETHAL NINJA might be a decent timekiller if one happened to be in the mood for a sentimental ninja flick, but it doesn't seem to have much else going for it. 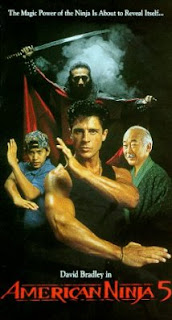 When I reviewed AMERICAN NINJA IV, I said that I didn't think "that I could have picked a worse exemplar of the genre had I been trying."  Well, Number Five is worse, though to be sure, the film was originally not created to be part of the franchise, having been filmed under the title "American Dragons."  David Bradley, who performed in the third and fourth installments, is about the same as he was in those: a poor actor and a decent movie-martial artist.

The plot is routine and the production values are abysmal.  The only reason I label the film's function as "metaphysical" is because Bradley's character raps a bit to his juvenile student about the spirituality of the martial arts before he proceeds to kick butt.

The film's phenomenality should be "uncanny" given all of Bradley's fights with ninjas in multicolored costumes, including a villain called "Super Ninja," who despite his name uses nothing but standard ninja tricks.  There's just one scene which forces me to term AN 5 as "marvelous," however. In this scene  Bradley, meditating along with his student (Lee Reyes), actually summons the spirit of his still-living teacher Tetsu to come rap with them, even though Tetsu's in America while the Ninja and his pupil are in Venezuela.  Perhaps this little "psychic hotline" schtick came about with the idea of giving the film's one name-star Pat Morita more to do in the film, the better to justify using him in the advertising.  However, because the film's too cheap to spring for any sort of effect to show Tetsu in psychic communication, the producers simply have Morita, clad in martial-arts costume, walk up to Bradley and Reyes, chat with them a little about ninja matters, and then walk away.  It's the only moment of laughworthy cost-cutting that raises AMERICAN NINJA 5 out of the ranks of the completely forgettable and into the ranks of Ed Wood-wannabes.  However, that one hilarious moment hardly justifies watching the film.

Posted by Gene Phillips at 2:08 PM
Email ThisBlogThis!Share to TwitterShare to FacebookShare to Pinterest
Labels: combative adventures, outre outfits (u), the marvelous