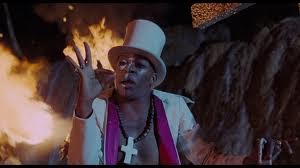 I make it a rule not to penalize any movie for its lack of fidelity to its source material.  However, it's fair to point out when a movie doesn't realize its own potential as well as the source book does.

Eon's 1973 Bond film LIVE AND LET DIE is a fitfully entertaining movie in its own right,  Certainly it's always lively, never showing any of the dull stretches that mar the next film in the series.  Still, it's lamentable that it doesn't play as vividly with the racial imagery as the novel does. Having reread the book to review the movie, I find that Fleming's LIVE AND LET DIE is something of a minor pulp masterpiece, whose complexities I've examined in three separate blog-pieces, here, here, and here. The book has a very forthright, cinema-friendly structure, so it's a shame that in all likelihood it's never be adapted in the only way it could be to preserve Fleming's concept: as a period-piece set in the 1950s.

Fleming's approach was impossible in the decade of the 1973 film.  In the novel the evil Mister Big maintains a network of resourceful black agents whose primary virtue is the invisibility conferred on them by the low status of their jobs as porters and the like.  In contrast, the dominant motto of black culture in the early 1970s might be, "Say it loud; I'm black and I'm proud!"  Therefor the LIVE AND LET DIE film takes the same basic approach as the contemporaneous "blaxploitation" films, where swagger replaces obsequious deceptiveness.

The villain's goal had to change as well.  In the novel Mister Big is smuggling pirate treasure into America and funneling the proceeds to the Communists.  Audiences of the James Bond films, regardless of their race or nationality, were accustomed to seeing 007 tackle much more momentous schemes.  Thus Mister Big becomes Kananga, the ruler of San Monique, a small island in the Caribbean, in essence a stand-in for Haiti, generally regarded as the birthplace of voodoo religion.  In addition, Kananga maintains a double identity, becoming the jive-talking Mister Big during some of his American forays.  Again voodoo practices serve to obscure the villain's activities, but Big's treasure here is a crop of poppies, and his plan is to flood the American market with cheap heroin.

The image of the drug baron was a fortuitous one for the filmmakers.  In some blaxploitation films, such as 1972's SUPERFLY, the druglords were portrayed as powerful men in the ghetto communities, capable of bucking the corrupt white system.  However, the druglords could also be potrayed as villains, seen as making themselves rich on the sufferings of their customers, just as the white Mafia dons did.  LIVE plays to both images, but never commits to one or the other.

Voodoo religion was also evoked as a source of power in a few blaxploitation films.  However, rather than following the book's lead, and showing it the religion as having a terrible hold on its adherents, the film's voodoo terrors are just standard boogiemen-images, even though actor Geoffrey Holder has some enjoyable scenes as a high priest of the cult.  The voodoo influence may also explain the shift in the book's geographical plan.  Where in the book Bond's progress takes an arrow-like trajectory  from New York to Florida to Jamaica, in the film the hero zigzags from New York to New Orleans to Big's  Caribbean redoubt.

LIVE shuffles some book-scenes to no great effect.  The scene in which Big commands Tee Hee to break Bond's little finger comes early in the book in order to make the agent's battle more personal.  The movie does have an early scene in which Bond is menaced by Big's gunmen, though it peters out rather disappointingly. The "threat to Bond's hand" does show up late in the picture, but at such a position it proves less than effective.  The film's Tee Hee is made more interesting than his prose incarnation by the addition of a claw-hand, while Whisper, another henchman from the book, gets his role beefed up as well.  Felix Leiter's mutilation by a captive shark is omitted, as is Bond's vengeful quest against the henchman guilty of maiming the FBI man.

If the books takes any key plotline from the book, it's the battle of Big and Bond over the psychic Tarot-reader Solitaire.  As in the book the woman's psychic gifts are ambiguous, so that I can't consider them "marvelous," but only "uncanny."  Solitaire isn't a strong character in either work, but she does at least have a history of sorts in Fleming, while in the film she's little more than a prize to be won.

Perhaps because the scripters were focused on making the black villains tough and efficient, Bond himself is sorely underwritten, often seeming to be little more than a quip machine.  The humor in LIVE isn't nearly as bad as what comes later in MAN WITH THE GOLDEN GUN, though both films are burdened with the "Southern fried cracker"  comedy of J.W. Pepper-- about which the less that is said, the better.  This Bond never seems to be a seasoned, clever agent, but more an effete dabbler who's wandered in from a Noel Coward play, and just happens to be able to fight pretty well.  The film gives Bond some good stunts, but they don't make up for a flat character and an equally flat performance by first-time Bond Roger Moore.

With the exception of J.W. Pepper, the film's greatest deficit is that the character of Mister Big lacks any of the mythic resonance of the original, or even that of a cognate figure like Superfly.  This Big may talk the talk of a revolutionary-- in one interview Yaphet Kotto even claimed that Big/Kananga was the film's real hero-- but this version of Big doesn't have the bearing of a great villain.  He's just an asshole drug-dealer with a good gimmick, nothing more.

Bond uses more gimmick-weapons in LIVE than he did in the previous Eon entry. One of the weapons, a watch that can attract small metal objects magnetically, comes close to the category of the marvelous.  However, I decided that the science-fictional factor here is still pretty limited, and thus belongs in the category of the uncanny.

Posted by Gene Phillips at 1:58 PM
Email ThisBlogThis!Share to TwitterShare to FacebookShare to Pinterest
Labels: combative adventures, diabolical devices (u), outre outfits (u), the uncanny