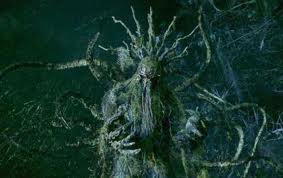 
Perhaps the most interesting thing about the direct-to-video movie MAN-THING is that it shows how little the Marvel Comics street-cred is worth in some adjuncts of the American movie-and-TV business.  At least HOWARD THE DUCK, while probably a worse movie overall, attempted to sell itself on the idea that the original comic was something outstanding, something worth seeking out for the uninitiated.  In contrast, MAN-THING is just a routine swamp-creature film with no ties to the Marvel monster save the name-- oh, and three names of the feature's raconteurs, worked in as names of characters (Steve Gerber, Val Mayerick, and Michael Ploog). Often when a filmmaker drops names in this fashion, it's to suggest respect for what the authors created. Here, the strategy strikes me as a feeble attempt to cull favor with comics-fans.

For those not in the know, the comics' series-concept was as follows: scientist Ted Sallis, at work on a "super-soldier" serum (a variant of the serum that created Captain America), is assaulted by enemy agents at his laboratory in a Florida swamp.  In the altercation Sallis plunges into the swamp's murky waters with his serum.  Together the serum and the mysterious magic of the swamp transform Sallis into the Man-Thing, a near-mindless muck-monster. The monster can't think, but it can feel, and when it encounters human beings who feel fear in its presence, the Man-Thing's touch burns them.

The script credited to one Hans Rodionoff keeps a few minor aspects of the Gerber-scripted MAN-THING comics, but on the whole the writer seems to have paid more attention to DC's competing sludge-fiend, SWAMP THING.  Like the Alan Moore version of Swamp Thing, this Man-Thing inhabits a swamp in Louisiana rather than one in Florida-- a domain which the monster can protect thanks to his ability to manipulate the local plant-life.  Like the DC muck-beast, this Man-Thing can even alter the size of his own plant-derived body, becoming a colossus as shown in the photo above.  Swamp Thing is also known (as the comics Man-Thing is not) for insinuating plant-growths into the bodies of his opponents, another feature of this DTV flick.

I wouldn't automatically downgrade MAN-THING simply for not being a copy of the comic book feature, though I do think the makers' disinterest in the original speaks to their priorities.  For what it's worth, the routine plot-- in which a new sheriff in a Louisiana community must investigate an assortment of mysterious deaths attributed to a swamp-monster-- is adequately executed.  Brett Leonard's direction is that of a competent journeyman, but at least it's not as dull as 90% of the movies that make their television debuts on the SYFY channel (as MAN-THING also did).

The main plot concerns how a drilling company has encroached on swampland sacred to local Indian tribes, and how the company's manager Franklin Schist (whose original comics-name was "F.A. Schist") killed off a Native American by the name of Ted Sallis.  Sallis is later resuscitated by the weird magic of the swamp and becomes its murderous guardian, eventually leading to a lopsided battle between Man-Thing and Schist.

There's also a paint-by-the-numbers romance between the sheriff-hero and a lady conservationist, and lots of empty lip-service paid to the woes of marginalized Native Americans.  The script would have done better to take a shot at understanding the mystique of the swamp's ecology rather than playing around with bland ecologist characters.  The script at least shows some potential for cosmological symbolism, unlike an earlier and far inferior marsh-creature flick, reviewed here.  But sometimes wasted potential is worse than no potential.

Posted by Gene Phillips at 3:25 PM
Email ThisBlogThis!Share to TwitterShare to FacebookShare to Pinterest
Labels: the marvelous