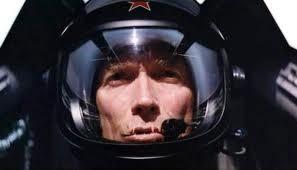 
This Cold War spy-drama was adapted from a novel I've not read, by one Craig Thomas, an early innovator in the subgenre of "techno-thrillers." I found the film version pretty much bereft of thrills, as it's directed by star Clint Eastwood with a leaden hand.  For my theory the sole interest of FIREFOX is that it's the closest superstar Eastwood has ever got to what I've called the "superhero idiom."

Unlike the generation of action-stars who followed Eastwood-- principally Stallone, Schwarzenegger, and Willis-- Eastwood largely stayed away from "metaphenomenal cinema" once he attained stardom.  Prior to FIREFOX, his best-known metaphenomenal exploit was that of playing the unnamed "jet squadron leader" who destroys the big spider of 1955's TARANTULA. After becoming a star, Eastwood characters sometimes fought psychotic villains, but they were of a naturalistic streak, whether they manifested as stalkers like the female psycho of 1971's PLAY MISTY FOR ME or the master assassin in 1993's IN THE LINE OF FIRE.  HIGH PLAINS DRIFTER presents a mixed bag in that the film suggests that Eastwood's avenging hero may be a ghost returned from death, though apparently this was not the original intention of the script.

The titular Firefox is a revolutionary new Soviet plane gifted with super-technology, in that it can become invisible to radar and can respond to the pilot's direct thought-impulses.  In a plotline better done in the STAR TREK episode "The Enterprise Incident," the Americans send Russian-speaking Air Force veteran Mitchell Gant (Eastwood) into Soviet territory.  Gant masquerades as a Soviet pilot in order to gain access to the Firefox project.  He is aided in this by Soviet dissidents, most notably those of Jewish extraction.  At one point Gant asks one of them if he isn't angry at how the U.S. uses him, knowing that the dissidents involved will probably die.  However, the fellow thinks it's worth it to take a shot at the evil KGB.

The film's emphasis on suspense over action leads me to label it a "drama" rather than an "adventure," even though there's precious little of the sort of personality conflict that usually dominates drama.  Gant has been traumatized by his experiences in Vietnam, symbolized by his regret at having seen an innocent young Vietnamese girl perish. His antipathy for killing-- perhaps intended as a change from hardasses like Dirty Harry-- causes him to miss the chance to kill a Soviet officer named Voskov.  Later, when Gant successfully steals the Firefox, Voskov follows Gant in a second Firefox-prototype.  This results in the film's one moderately strong action-sequence, in which Gant triumphs.  The film certainly intends the narrative to build to this clash, making it a "combative drama."  But there's no real emotional payoff, either in terms of Gant's emnity for Voskov or in terms of his purging his personal demons.

Oddly, in the latter part of the same year, 1982's FIRST BLOOD would introduce to film audiences a much more popular Commie-fighting hero, the redoubtable John Rambo.  Eastwood was certainly pursuing some anti-Communist themes here, but in his quest to keep things relatively realistic, he sapped his storyline of any potential for either high adventure or suspenseful skullduggery.
Posted by Gene Phillips at 3:49 PM
Email ThisBlogThis!Share to TwitterShare to FacebookShare to Pinterest
Labels: combative dramas, the marvelous