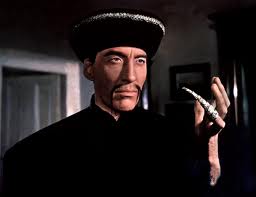 The only literary virtue of racist fictions is that they give the writers a motivation to create the most delirious forms of evil they can imagine, and then project them onto the representatives of what has been termed (rather simplistically) “the Other.”  Some critics would argue either that the virtue is either non-existent or that it matters little in the face of its moral consequences: that of encouraging bigotry against cultural outsiders on the grounds of race, religion, or ethnicity.  I’ll note the partial validity of the latter position, and will admit that I probably would not enjoy the “Yellow Peril” stories of Sax Rohmer’s Fu Manchu as much as I do were I an Asian.  Nevertheless, Rohmer’s famous character is a little more than just a racist fiction, for Rohmer also made him a superlative genius and a more complex personality than any of his other, rather stereotypical characters.


FACE OF FU MANCHU, directed by Don Sharp, was the first time a film-producer sought to bring out a series of Fu Manchu films since the early 1930s.  In my review of THE MYSTERIOUS DR. FU MANCHU I noted that the first of that early series lacked Rohmer’s pulpish extravagance.  FACE, the first film in a series by European producer Harry Alan Towers, lacks that extravagance as well, but at least that’s not because the Towers film tries to be more melodrama-based.


FACE's script is credited to Towers-- who used a pseudonym for all of his credits-- and it does maintain the structure of a Rohmer novel, which is generally much like a film-serial.  The vllain wants something, the heroes try to prevent his getting it, mix and repeat.  In this case the villainous Fu Manchu seeks a way to cultivate an unstoppable death-drug from the flowers of the Tibetan Black Lotus.  But he cannot obtain the secret from the Tibetans, who apparently refuse to give it to him: instead, he must seek out Western intellectuals who have gleaned the secret.  This was a common Rohmer ploy, as it forced the insidious Chinese “devil-doctor” and his largely Asian servants to infiltrate the worlds of Caucasian culture.


Some enthusiasts of the Towers series find this initial outing to be the best offering.  FACE does move smartly along from plot-point to plot-point, and unlike some later entries in the series, it generally makes sense as far as establishing Fu Manchu’s next goal (he gets the professor who can distill the death-drug from the Lotus, but then he needs certain research papers, etc.).  Fu Manchu is, however, a rather flat character here, despite being granted a formidable presence by actor Christopher Lee.  Towers makes him the period equivalent of a terrorist, willing to annihilate huge quantities of innocents in order to achieve his goal of world domination.  Rohmer’s Fu Manchu was subtler in his bids for power.  No doubt Towers chose this direction because he was trying for something comparable to the contemporaneous James Bond series, in which the superspy was often pitted against super-villain-like threats.


Set more or less in the early half of the 20th century, FACE has the advantage of not having to contend with modern views-- though when hero Nayland Smith raises the possibility that Fu Manchu may have returned, his friend Petrie replies scathingly, “Oh, not the Yellow Peril again,” as if to distance the film from reality by evoking the stereotype.  In the more extravagant novels Fu Manchu is often associated with all manner of virulent diseases and vile crawling things, but here the Black Lotus is the only natural peril the devil-doctor employs, meaning that the “technology” of this film only achieves an “uncanny” status.  The same status applies to Fu Manchu’s power of hypnotism.  He’s seen here as having the Dracula-like ability to mesmerize complete strangers instantly.  The audience sees him do this once, and it’s implied that he does so at the film’s beginning to force a pawn to take his place beneath an executioner’s axe—surely the film’s most arresting sequence.


Though Towers’ script doesn’t conjure the level of delirium seen in 1932’s MASK OF FU MANCHU, there are some intriguing moments.  Fu Manchu makes his London hideout beneath the River Thames, and the script constantly ties his activities to the river.  Towers’ purpose is certainly to provide clues that lead Nayland Smith to his quarry, but the repeated emphasis also gives Fu the quality of a chthonic death-god, dwelling beneath the streets (and consciousness) of mundane Britishers.  Most of Fu’s servants are Asian thugs with no personality, though as in the novels the villain does use Europeans, with his most prominent non-Asian servant going by the strangely Hindu name of “Hanuman.”


The film also may have borrowed a scene of sadistic content from MASK OF FU MANCHU.  In that film Fu Manchu’s daughter has a man tortured with whips in order to bend him to her erotic will.  In FACE, the devil-doctor’s daughter—given the name “Lin Tang”—specifically asks her father for permission to whip a disobedient female servant, because Lin Tang “likes” her.  Towers allows the audience to lead up to the sadistic act, and then cuts it off when Fu Manchu conveniently decides to drown the female servant instead.  But clearly Towers wants to remind the audience of the Yellow Peril’s penchant for unthinkable tortures.


Aside from Towers’ tendency to “dumb down” the persona of Fu Manchu into a standard super-villain, the first movie has one other sizeable difference from the Rohmer books. Usually, whenever Fu Manchu’s devious plans are undone by Nayland Smith, the villain and his aides simply melt into the English fog, as if they are spirits able to whisk their way back to the mysterious Orient.  Once foiled, this Fu does the same, but in a lengthy coda, Nayland Smith actually follows the Insidious One back to the Orient—specifically, to Tibet, where Fu attempts to get the last Black Lotus seeds from a Tibetan monastery.  It’s far from clear as to whether the Tibetan occupants of the monastery are aware of Fu’s evil plans. At any rate Nayland Smith, anticipating later military ventures against terrorist-havens, blows up the whole monastery to rid the world of the menace of the Lotus seeds.  Today we would call any innocents caught in the blast “collateral damage.”  The main narrative purpose of the explosion is not so much to vilify “the Other”, though, but simply to provide a measure of closure.  Even by 1965 it was axiomatic that Fu Manchu himself would always escape death, and would return for another battle—which is the suggestion with which all of Tower’s FU MANCHU films conclude.

Posted by Gene Phillips at 3:49 PM
Email ThisBlogThis!Share to TwitterShare to FacebookShare to Pinterest
Labels: combative adventures, diabolical devices (u), the uncanny