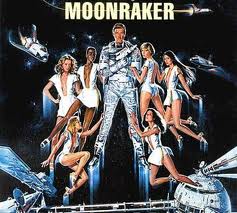 
The original MOONRAKER novel is one of Ian Fleming's strongest works, but like LIVE AND LET DIE it's a story that would only work within the same historical milieu during which Fleming wrote it.  In the novel Bond is called upon to investigate Hugo Drax, a British WWII veteran who has become a self-made millionaire and who has become a national hero due to his financial sponsorship of Britain's first nuclear warhead.  Films about nuclear brinkmanship persisted long past the 1950s-- indeed, the previous Bond film in the series, THE SPY WHO LOVED ME,addresses that very concern-- but the idea that sells the novel, of a private British citizen intervening in his country's nuclear program, seems to me quintessentially of the fifties.

In addition, the MOONRAKER novel could only have taken place within a few decades of the end of World War II.  James Bond eventually learns that Drax is actually a German Nazi officer who has masqueraded as a British veteran, his deception facillitated by battlefield injuries that required extensive surgery.  His plot-- to annihilate London by dropping on it the very warhead he creates with the government's cooperation-- is not the first "bizarre crime" that smacks of the uncanny phenomenality, but it is the first Fleming-crime that involves a world-shaking threat comparable to the later THUNDERBALL.  In addition, Drax is like the previous "super-villain" Mister Big something of a physical freak, not only because of his facial reconstruction but also because he possesses "ogre's teeth," the production of congenital thumbsucking (Bond becomes a positive armchair psychologist on this theme).  Drax is also a personification of Germany's reputation for "efficiency"-- one explicitly referred to in the novel-- and is exemplified by Drax's German-born missile-building employees, all of whom sport shaven heads to discourage their being recognized.

The film begins with a "teaser" sequence with no direct ties to the main plot; the very sort of thing that will be gently mocked in by the next film in the series, the more naturalistic FOR YOUR EYES ONLY. This sequence includes an attack by Bond's foe from the previous film, Jaws (in his second and last appearance in the series), as well as Bond's dazzling escape from free-fall peril.

Following the teaser, Bond is called upon to investigate the circumstances by which an American space-shuttle built by Drax Industries (based in California) disappeared while being transported by a British plane-convoy.  The convoy crashed, but the remnants of the shuttle were not found.  Thus Bond sets up a meeting with Drax at Drax's California estate.  Though Drax is not said to be of German descent-- indeed, he's given no backstory to speak of-- he does seem to value "efficiency," for Bond witnesses a cadre of well-toned men and women doing calisthenics on the estate's lawn.  The agent also sees Drax toss meat to his guard dogs, and how the dogs refrain from eating the meat until Drax permits them to do so.

Bond also encounters three other characters: standoffish Drax-scientist Holly Goodhead, the more approachable secretary Corinne, and Drax's main bodyguard, a man who, though dressed in traditional Japanese garb and played by a Japanese actor, is given the dominantly Chinese name "Chang."  Almost as soon as 007 gets there, Chang and other Drax agents make two attempts on his life.  The agent perserveres until he gets a chance to break into Drax's files, which gives him a clue to a new avenue of investigation in Venice.  Corinne, after sleeping with Bond, keeps silent about his trespasses and pays for it with her life.

In Venice Bond tracks down a Drax laboratory and witnesses a demonstration of a fatal nerve gas.  He also encounters Holly Goodhead again, and slightly later learns that she's a CIA agent, out to investigate Drax on behalf of America's interest in the missing space shuttle.  (Thus she loosely parallels the policewoman character of the Fleming novel, who works alongside the hero while both investigate Drax.)  Bond tries to persuade Holly to work with him, but at the first opportunity she takes flight.  The hero, after dodging an attempt to kill him in Venice's canals, engages in an above-average fight with Chang and kills the Drax bodyguard.  Amusingly, the fight briefly takes an "East vs. West" theme as Bond employs a European rapier against Chang's Japanese sword.

Bond attempts to lead his superiors to the secret lab, but by the time he does, Drax himself has had the whole location remodeled, so that Bond looks the fool.  However, the agent has managed to procure a sample of the gas, which he turns over to M while pursuing a new avenue in Rio de Janeiro.  Meanwhile, with Chang out of the picture, Drax gets on the phone to find a new enforcer.  Thus Jaws-- whose assassination attempt in the teaser was presumably from some independent contractor-- finds his way into the main plot.

Bond encounters Jaws twice in Rio and briefly allies himself with Holly again; however, as a result of the second encounter, Holly is taken prisoner by Drax's operatives.  Bond's next clue takes him down the Amazon River, where he escapes yet another (by now repetitive) attempt on his life and then all-too-easily finds his way to Drax's secret citadel.  Here Bond once more meets the super-healthy minions of Drax seen back on the estate, and learns that Drax, like Stromberg in the previous series-film, plans to decimate the population of the world.  His plan is to escape Earth to a radar-shielded space station orbiting the planet and to bombard the world with missiles filled with nerve gas.  When the chaos is over, Drax will then descend to rule the world alongside his eugenically-perfect soldiers.

Drax reunites Bond with Holly in order to kill them together, in a manner notably derived from a similar peril in the novel.  Bond and Holly hijack one of the shuttles and follow Drax to his space station.  Without dwelling on all of the particulars of the climactic scenes, only two are worth noting.  One is when the agents manage to destroy Drax's radar shielding, in jig time a batallion of American astronauts zoom up to check out the hostile station and engage Drax's people in a very STAR WARS-y laser battle.  The other comments on the eugenics aspect of Drax's plan, for though Drax has allowed Jaws to come on board-- along with a pigtailed girlfriend Jaws picked up in Rio-- Bond makes clear that a freaky fellow like Jaws has no place in Drax's perfect world, so that the villainous hitman joins Bond against his former master.  All the rest is a very splashy but somewhat predictable spectacle, though I'll note that Holly Goodhead, despite her jokey name, proves herself to be one of the most physically adept of the "Bond girls."

Compared to the previous film in the series, MOONRAKER's script is considerably less tight, narrative momentum being furnished by the constant attempts on Bond's life.  In its emphasis on spectacle over story, this film comes closer to the model of DIAMONDS ARE FOREVER, though MOONRAKER is better about providing motivations for 007's peregrinations. Happily Jaws never returns after this, for the filmmakers far too often milk the joke of his "Wile E. Coyote" survivals of dire fates, and the sequence where he experiences "love at first sight" with the pigtailed girl is too corny by half.  When I first saw this, I was put off by the overly frequent merchandise-placements and by the attempt to place Bond in an overly "science-ficitonal" context.  Moore loses the credibility he brought to the Bond character in SPY, becoming little more than a joke-machine again, but Lois Chiles as Holly and Michael Lonsdale as Drax score well.  Though SPY is a better overall film than MOONRAKER, I do feel that of the two doomsday villains, Drax is a little more appealing than Stromberg.  Though Nazism is never referenced for the movie-Drax, his quest for genetic perfection-- even though his minions are multiracial-- still evokes the spectre of the Third Reich admirably.

Posted by Gene Phillips at 2:44 PM
Email ThisBlogThis!Share to TwitterShare to FacebookShare to Pinterest
Labels: bizarre crimes (u), combative adventures, freakish flesh (u), the marvelous