FRANKENSTEIN MUST BE DESTROYED (1969) 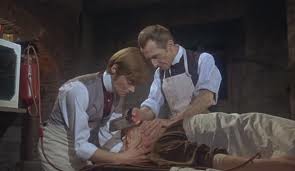 In my review of CURSE, I pointed out that the main plotline concerns a Faust-like theme, in that Frankenstein is a beguiling Mephisto who lures his slightly older tutor Paul into evil.  This time, Frankenstein is an older man who blackmails two younger people into serving his ends.

DESTROYED opens in an action-packed manner. Frankenstein-- wearing a face-mask that is perhaps designed to conceal his identity, though it doesn't look like a person's real face-- fights with a thief who intrudes on his secret laboratory.  The thief escapes the mad scientist and tells the police what he's seen.  Frankenstein gets away from the cops but needs a new place to conduct his experiments.  His main reason for being in this vaguely Germanic locale (the country's never named but most characters have names like "Richter," "Frisch," and "Spengler") is to seek out another scientist, a Doctor Brandt. Brandt, who corresponded with Frankenstein, discovered a special brain-transplant technique that Frankenstein wants for his own purposes.  However, since corresponding with Frankenstein Brandt has gone insane and has been confined to an asylum.

Under an assumed name the mad scientist takes a room at a boarding-house.  It's not clear whether he does so knowing that the house's owner Anna Spengler has a boyfriend, Karl, who works at the asylum.  But even if Frankenstein has such foreknowledge, he lucks out hugely when he overhears a conversation between Karl and Anna which incriminates them in selling drugs.  They're doing so for a sympathetic reason-- to make enough money to care for Anna's ailing-and-never-seen mother.  Frankenstein cares nothing for the couple's motives; he insists that they obey his commands, which include smuggling the insane Brandt out of the asylum at night.  Frankenstein wants that vital information, and apparently the only way he can get it-- though the logic eluded me at this point-- is to transfer Brandt's brain into another body.  Again with Karl's help, Frankenstein harvests the body of a Dr. Richter, scoops out Richter's brain and transplants that of Brandt.  It works insofar as eventually the hybrid creation does take on the full intelligence of Brandt, though understandably he resents being in a new body.

Frankenstein's little empire is doomed, however, as the cops continue to follow his trail. Brandt's wife happens to spot Frankenstein on the street and follows him to his domicile.  From there one calamity after another transpires.  Brandt escapes the lab even though Anna, stricken with fear from his chop-topped skull, stabs him nonfatally.  Anna makes the mistake of telling Frankenstein what she did, and the enraged scientist kills her.  This eventually precipitates a battle between Karl and the scientist, but Karl loses out.  However, Brandt-- having realized what a freak he's become after he tries to approach his wife-- confronts Frankenstein in the boarding-house and sets the house on fire, daring him to brave the fire to gain the papers containing the vital info Victor wants.  Frankenstein almost manages to escape with his prize, but Brandt overtakes him and drags him into the flames.  One could imagine that this version of Frankenstein does die, since the next entry in the series is a remake of CURSE.

Though the director was Terence Fisher, who had also helmed CURSE, the two credited writers had far less experience with scripting than with duties like producing or directing.  Still, just as Frankenstein again appears in a Mephisto-like role, he also appears with much the same motives as in CURSE.  He claims that what he's interested in is scientific progress, for in one scene he disparages a group of English clubmen who know nothing about science.  However, it's clear that his dream of using brain-transplants to preserve the collected knowledge of "men of genius" has nothing to do with improving human life.  It's merely his own ego in action, his attempt to forge a method by which he, being a man of genius, will enjoy immortality.

The film also contains a controversial scene in which Frankenstein rapes Anna at night, an incident which Anna conceals from Karl.  This extraneous scene was allegedly inserted on the insistence of producer James Carreras, who wanted "more sex" in the picture.  However, though the scene is unpleasant to watch, it does fit with the nature of Frankenstein's character established in CURSE.  In that film, Frankenstein was just as ruthless with a sexual partner like Justine as with his other victims.  Thus it's not unlikely that Frankenstein would have the temerity to simply slake his sexual thirsts on any helpless victim he could-- which also puts the lie to his sophistry about scientific "progress."
Posted by Gene Phillips at 3:47 PM
Email ThisBlogThis!Share to TwitterShare to FacebookShare to Pinterest
Labels: the marvelous