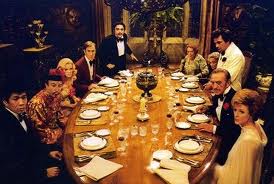 
I won't spend a lot of time analyzing the plotline of MURDER BY DEATH, even though it is, to my mind, Neil Simon's best contribution to the annals of comedy in any medium.  Patterned after the mystery-subgenre of the "country-house whodunit," the story revolves around a dinner-party convened by the mysterious owner of the country-house involved, a fellow with the risible name of "Lionel Twain" (a pun that no one under a certain age will get). All of the guests to receive the invitation are parodies of famous fictional sleuths.  In the photo above, they're comprised of Charlie Chan (Peter Sellers) and his son, the lady secretary (Eileen Brennan) to Sam Spade, Hercule Poirot (James Coco) and his sidekick, Miss Jane Marple (Elsa Lanchester) and companion, Sam Spade (Peter Falk), and Nick and Nora Charles (David Niven, Maggie Smith).  Once the master investigators have assembled, Twain issues a challenge to them, to solve a murder that will be committed that very night.  Many amusing misadventures ensue, though in contrast to most comedies, MURDER BY DEATH sports a bizarre, somewhat unsettling ending worthy of the most acerbic irony/satire.  Still, I categorize this movie as a comedy because the bulk of the events are played for farce (a tough private-eye displays a penchant for women's dresses, Twain berates the Chinese detective for talking in the pidgin-English popularized by the many "Charlie Chan" films).

What I find interesting is that this film doesn't make any of the editions of John Stanley's CREATURE FEATURES guide, though Stanley does include not only jillions of old-dark-house films (irrespective of whether anything supernatural is suggested), but also the various versions of Agatha Christie's AND THEN THERE WERE NONE.  I've gone on record as disagreeing that this work and its adaptations (like this one) deserve to be considered within the corpus of horror/fantasy/SF genres, a.k.a. what I term "the metaphenomenal."  However, though MURDER clearly borrows from the pattern of Christie's serial-murder opus, Simon's mystery-spoof has much more metaphenomenal content, given that the country-house is gimmicked up with assorted delusive or deadly devices.  Because one of these devices involves using the power of illusion upon the nonplussed detectives, I give this film an entry in the "enthralling illusionism" category, though it's just as noteworthy in the "outre devices" category, since the detectives are set up to dodge perils like chair-impaling spears and ceilings set up to crush the occupants of the corresponding rooms.  I could speculate that because MURDER doesn't ever attempt to conjure forth the emotion of fear, as do many of the "old-dark-house" flicks, that lack may have moved Stanley not to include it; to consider MURDER BY DEATH to be a comic inversion of "realistic" mystery-- in spite of the gimmicked-up Twain house. 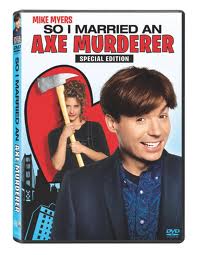 In contrast, the 1993 Mike Myers comedy SO I MARRIED AN AXE MURDERER-- which appeared (and flopped) in U.S. theaters in between Myers' more far more successful WAYNE'S WORLD films-- is neither uncanny nor funny.  Wikipedia points out that the project had its genesis in men complaining about their problems with women, but if AXE ever had anything interesting to say about gender problems, it gets lost in Myers' regurgitation of his Saturday Night live routines (particularly one involving a crazy Scottish family) and attempts to play to the humor of obscure nostalgia (Myers plays a modern-day version of a 1950s beat-poet).

Through a string of allegedly comic contrivances, Myers' character Charlie first falls in a love with a butcher-woman named Harriet, and then begins to suspect that she's a serial axe murderer who has chopped up all of her previous husbands.  Since the idea of axe-killings suggests extreme gore, many films with such figures qualify for the status of "perilous psychos" in the uncanny phenomenality, such as 1964's STRAIT JACKET and 1971's THE MAD BUTCHER.  However, though this film also sports an axe-murdering psycho, this psycho fits the naturalistic phenomenality, as there's no attempt to build up the psycho in question as demonstrably "strange," in contrast with other modern-day, non-Gothic crazies such as Norman Bates in PSYCHO and Hexina in HEXED.

Posted by Gene Phillips at 11:48 AM
Email ThisBlogThis!Share to TwitterShare to FacebookShare to Pinterest
Labels: diabolical devices (u), enthralling hypnotism and illusionism (u), perilous psychos (u), the naturalistic, the uncanny