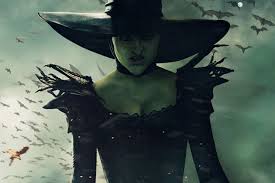 
As a film OZ is far from being "powerful," and has no shot at all at being "great."

I have nothing against latter-day talents doing remixes of well-known works, be they famous books like L. Frank Baum's WONDERFUL WIZARD OF OZ or its best known cinematic adaptation from 1939.  Indeed, the MGM WIZARD is renowned precisely because it skillfully remixes elements of the source novel and adds a cornucopia of new material. That film even changes the phenomenality of Oz itself, which in the Baum novels is a marvelous land that co-exists alongside the real world.  The MGM movie transforms Oz into a projection of Dorothy's consciousness, so that the film fits the "uncanny" manifestation of my "delirious dreams" trope.  Yet even in this delusive form, MGM's Oz loses none of its narrative power.

In contrast, Raimi and his scripters bring nothing new to the table.  OZ tosses together most of the familiar tropes of the 1939 film with no passion or insight.  It also works in a few elements of Baum's novel-series, but these aren't enough to redeem the film's overall predictability.

The central idea of OZ is to provide a more involved backstory for Baum's "Wizard of Oz" character.  Though the film's character shares the name "Oscar Diggs" with Baum's original, as well as a few biographical elements (former traveling carnival magician), Raimi injects a more "adult" take on the character.  To put it simply, this Diggs (James Franco) is a dog.  Wherever the carnival goes, Diggs uses his skills as a magician and other charms to win over countless women.  As OZ is a Disney-affiliated film, Diggs' peccadillos are never made explicit, but it's strongly suggested that his main strategy is to win women by giving them music boxes that he claims are priceless mementoes-- though of course he has dozens of the things.  Yet he's not utterly irredeemable, for he does have One True Love in his life, a woman named Annie (Michelle Williams).  She seeks him out at the carnival to tell him she's received a marriage proposal from a man named John Gale (a "shout-out" to Baum's best-known heroine "Dorothy Gale.")

Diggs, consumed with a desire to be "a great man" rather than the sort of good fellow who marries and keeps a regular job, declines to commit to Annie.  Moments later, as a Kansas whirlwind looms on the horizon, one of Diggs' deeds catches up with him.  Having never heard the rule about "not shitting where you eat," the carnival's strongman finds that his wife has one of Diggs' music boxes, and comes after Diggs, ready to maim the magician.  Diggs manages to clamber into a hot-air balloon maintained by the carnival, and in no time he's on his way to Oz.

This somewhat more realistic version of a children's character calls to my mind similar developments in Gregory Maguire's 1995 novel WICKED, which rewrote elements of the Baum novel and spawned its own popular stage-musical adaptation, even as Baum's book did.  I don't suggest that the scripters sought to consciously emulate Maguire's novel, but I suspect that they were aware of its general thrust: to rewrite the backstory of the Wicked Witch of the West.  It's therefore not surprising that the first character Diggs encounters is one Theodora (Mila Kunis), who is the selfsame Witch before she becomes "wicked."  Upon encountering the weird stranger and witnessing him perform an act of stage-magic, Theodora tells Diggs that he must be "the Wizard" whose coming will overthrow another witch, one who is guilty of slaying Oz's king.  Diggs, who desperately needs succor in this strange land, allows Theodora to believe him to be her savior.  During their progress to the Emerald City, Diggs also shares some non-specific romantic moment with her-- a dalliance that results in Theodora becoming instantly besotted with him.  The script later encourages the interpretation that this amour fou is founded in Theodora's projections than the result of Diggs' actions.

On the way, Diggs picks up a comedy-relief ally, a flying monkey named Finley (Zach Braff).  Braff also plays Diggs' backstage assistant back at the carnival, making him one of two Oz inhabitants who resembles someone Diggs knew in his world.  This trope is patently derived from the 1939 film.  It doesn't have any strong resonance here, though, since Oz doesn't seem to be Diggs' dream, but is a real place, as in the Baum novels.  We see a similar rewriting of a dream-fantasy in Tim Burton's take on ALICE IN WONDERLAND.

In the Emerald City Diggs meets Theodora's sister Evanora (Rachel Weicz).  She sets him a familiar task: before he can become Oz's new ruler, he must kill a wicked witch, the same one guilty of killing the old king.  Diggs reluctantly accepts, and he and Finley set out on the Yellow Brick Road.  On their way they add to their company "China Girl", the last survivor of a city of china-glass people decimated by the wicked witch's flying baboons.  The trio do encounter a witch, but it's Glinda the Good Witch, the second character to reflect Diggs' real-world experience, as this Glinda is a dead ringer for Annie (and therefore is also played by MichelleWilliams).  Glinda straightens things out: the real wicked witch is Evanora, who both killed the King of Oz (and Glinda's father) and controls the evil flying apes. Glinda, much like Annie, encourages Diggs to do the right thing and help her mount a defense of the people of Oz against Evanora's tyranny.  Meanwhile, Evanora manages to turn Theodora to the Dark Side by playing on her unbalanced love for Diggs, so that Theodora becomes Sam Raimi's incarnation of the formidable Margaret Hamilton original.

Given the original Wizard's penchant for trickery, it will come as no surprise that Diggs ends up using trickery to defeat the two evil witches-- though both of them must survive to become the characters Dorothy later encounters.  There are some enjoyable set-pieces here, especially one involving the poppy field, and the climax gives Glinda the chance to avenge her daddy in a vivid magical fight with Evanora. However, on the whole the ending is both pat and predictable.

None of the characters runs any deeper than his or her function in the story, and this is particularly evident with Oscar Diggs.  His lechery doesn't spring from any elements vital to this Raimi rethinking of the Kansas conjurer; it's just the script's method for transforming Theodora and uniting Diggs with a fantasy-world version of his true love.  Glinda/Annie gets the last laugh at the ending, for through her influence Diggs becomes an ego-effacing "good man" rather than the ego-serving "great man" he wanted to be.  But this minor elaboration of sexual politics comes off as a random thought rather than a developed theme.  In addition, the doubling of the villains, which may have been patterned after Lucas' STAR WARS continuity, proves merely distracting, as neither Theodora nor Evanora are charismatic villains in themselves.  They're more like "placeholders" in the greater Oz-continuity.  The actors do the best they can, but most of the time they're reduced to acting out pre-arranged gestures rather than well conceived characters.

The only elements that seem somewhat original are those that the script borrows from Baum's novels.  Baum's china-people were to my knowledge never adapted to film before, and even though OZ only has one of them, China Girl's presence at least mitigates the film's heavy indebtedness to the 1939 WIZARD OF OZ.  And the film's use of stage-magic and technological trickery evokes the American cultural underpinnings of Baum's world, which is notable for having broken with the pre-technological fantasies of the European prose-fantasy tradition.  But on the occasions that Raimi and his scripters hit on a theme correctly, it seems like a stab in the dark thanks to all the tedious in-jokey references to the MGM version.

Lastly, I found the visual look of Oz heavy on pretty colors but not really informed by a good design-sense, in contrast, say, to the Burton ALICE.

Posted by Gene Phillips at 1:37 PM
Email ThisBlogThis!Share to TwitterShare to FacebookShare to Pinterest
Labels: combative adventures, delirious dreams and fallacious figments (u), the marvelous