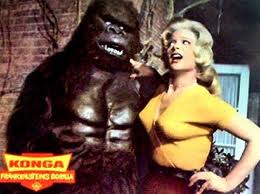 
Here we have two fairly typical "mad doctor" films.  I only give THE BLACK SLEEP a "fair" rating in terms of mythic symbolism because of some suggestive psychological content, though I don't think the film evokes that content as well as, say, a similar 1950s mad-science film like THE SON OF DR. JEKYLL.

KONGA is, without a doubt, a fun film, in spite of John Lemont's direction, which I found pedestrian even when he was trying to be saucy.  Happily the script-- co-written by producer Herman Cohen and frequent collaborator Aben Kandel-- keeps the action percolating along.

This was Cohen's second outing with star Michael Gough, previously in 1959'S HORRORS OF THE BLACK MUSEUM.  Gough gives a good performance as the obsessed Doctor Decker, who will stop at nothing to test his unique theories on producing gigantized forms of life.  There's not much depth to Decker, though, even in comparison to a simple figure like Prof. Deemer in 1955's TARANTULA.  Decker, after having been lost in Africa for months, returns to his native England, bringing with him a baby chimpanzee and two drugs.  One drug will promote amazing levels of growth, allowing Decker to mutate the chimp into a gorilla (!), whom Decker dubs Konga.  The other drug gives Decker the power to control Konga mentally, which comes in handy when Decker wants to kill various enemies.

Decker's first proxy-murder is quickly discovered by his lab assistant Margaret, a woman of mature years. Margaret, though horrified by the crime, has been in love with Decker for years, and puts aside her scruples in order to blackmail Decker into marrying her.  Surprisingly, Decker doesn't simply sic Konga on her, but allows Margaret to hang around while Decker pursues a more tantalizing female-- his busty young student Sandra.  Sandra, as portrayed by Claire Gordon (above), is probably one of the least likely females ever to profess an interest in science.  But though her close student-teacher relationship with Decker irks her boyfriend Bob, Sandra registers only shock when Decker finally makes a move-- very much in contrast to the young golddigger who takes up with older man Vincent Price in Cohen's DIARY OF A MADMAN.  Decker's pass at Sandra aggravates Margaret into giving Konga extra doses of growth drug in order to turn the giant gorilla against Decker.  Instead, both she and the rogue scientist meet their dooms, as does Sandra-- though she perishes in the mad doctor's garden of man-eating plants.

Since the bestial Konga is in no way a "character" the way his namesake was, the only mythic symbolism here is the idea of the "white man who brings back secrets from the dark pagan continent."  This motif is somewhat evoked by Decker's curious decision to create a garden of evil plants in his English laboratory, but the script doesn't pursue racial myths.  Indeed, the only time Decker talks about the culture of the Africans whom the doctor met during his sojourn, he characterizes them as decent people who like to dance a lot.  And no, I don't think that was necessarily a negative stereotype: it was probably just tossed in because Decker shows a few home-movies of the Africans dancing.  The line was probably dictated by whatever film-footage the producers had available. 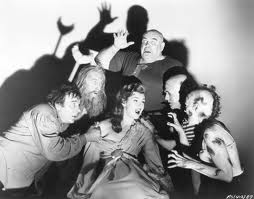 THE BLACK SLEEP doesn't move along as briskly as KONGA, but it does deliver a more coherent story.  Young Doctor Ramsey (Herbert Rudley), about to be executed for a crime he didn't commit, is rescued from the hangman by Doctor Joel Cadman (Basil Rathbone).  Cadman slips Ramsey a drug-- the "Black Sleep" of the title-- that causes Ramsey to fall into a deathlike coma.  Cadman then acquires Ramsey's supposedly dead body, substitutes rocks in the official casket, and restores Ramsey to life.  Cadman wants Ramsey to assist him in his surgical procedures at his private estate.  Ramsey is so grateful to have had his sentence commuted on any terms that he agrees, even though he sees that Cadman has a relationship with a scuzzy bodysnatcher named Odo (Akim Tamiroff).

Ramsey finds Cadman's estate somewhat less than aseptic.  Shortly after meeting Cadman's mute butler (Bela Lugosi), Ramsey witnesses Cadman's young nurse Laurie (Patricia Blair) being chased into the foyer by a hulking, moronic-looking fellow named Mungo (Lon Chaney Jr).  Ramsey can't stop this behemoth, but Cadman's other nurse-- an older woman named Daphne-- is able to command Mungo to halt and go away.  Ramsey questions why Cadman allows the demented man to roam the halls of his house, and Cadman really doesn't give him much of an answer.

The audience is then made privy to another occupant of the house whom Ramsey does not meet: Cadman's beloved wife Angelina, a woman rendered comatose by a "brain malignancy."  The audience sees that Cadman is entirely obsessed with finding a technique that will revive her, and also that Daphne conceals an unrequited affection for her doctor-master.

It doesn't take long for Cadman to show his true colors during Ramsey's first surgical collaboration with the mad doctor.  Further, Mungo makes another attack on Laurie, and it's specified that he only attacks her.  In true "each man kills the thing he loves" tradition, Laurie reveals to Ramsey that Mungo is her father.  Under the name "Doctor Monroe"-- a man Ramsey knew slightly before Monroe was mutated into "Mungo"-- the physician came to Cadman for help with a malady.  Cadman did to Monroe what he did to many others; experimented on him in a way that left Monroe a near-mindless creature.  Further, Ramsey also makes other discoveries: that Cadman's house conceals a dungeon full of other failed experiments-- and that Cadman is actually indirectly responsible for the murder for which Ramsey was sentenced.  The film comes to a feverish conclusion as the freaks-- including genre stalwarts John Carradine and Tor Johnson-- break out of their dungeon and bring about the death of Doctor Cadman. Moments later the British police appear to clean up the mess and clear Ramsey's name so that he and Laurie have a future together. Conveniently, mad Mungo is also killed by the freaks, so that Ramsey doesn't have to worry about a father-in-law prone to strangling either him or his wife.

Though Rudley has the unenviable task of playing the noble "straight man" as against all the featured horror-actors, he gives a performance just as strong as Rathbone's, a rare occurence in films pitting earnest young men against obsessed mad doctors.  Though BLACK SLEEP isn't usually deemed one of the best films in Rathbone's repertoire, I consider SLEEP one of the actor's best performances.  When Ramsey reviles Cadman for his heartless experiments, Cadman shows a flash of conscience, and even shows Ramsey the comatose body of Angelina to prove that he Cadman did it all for love. The script even gives Cadman a minor humanizing trait in that he tells ferociously bad jokes.

The cosmological theme is pursued more here than in KONGA, as the script communicates some of the mysteries of the human body, which can be revealed-- or perverted-- by science.  But more appealing is the odd doubling of psychological roles.  Both Cadman and Mungo are paternal imagos, while both Daphne and the comatose Angelina are maternal ones.  Though Mungo's wife is long dead, Daphne is able to control the monster (Ramsey theorizes) because Daphne suggests to Mungo the "image" of his wife.  But then, why does the demented Mungo seek to kill his daughter?  Here too we venture into the waters of "Freudian ambivalence," but it must be admitted that the film doesn't ever seek to answer the question, so the venture can only be in the shallow end of the pool.

Though 1948's ABBOTT AND COSTELLO MEET FRANKENSTEIN is correctl viewed as the proper sendoff of the "monster rally" films of the 1940s, BLACK SLEEP makes at least an interesting footnote to the trend, even if one wishes that Lugosi, Carradine, and even Johnson had received more substantial roles.

Posted by Gene Phillips at 3:34 PM
Email ThisBlogThis!Share to TwitterShare to FacebookShare to Pinterest
Labels: the marvelous