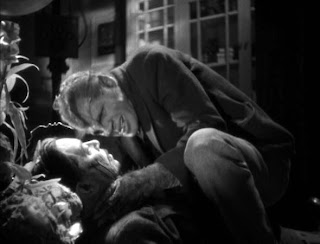 In my review of THE ISLAND OF LOST SOULS I wrote:

...suffice to say that SOULS' narrative grafts many aspects of Universal's successful 1931 FRANKENSTEIN to the skeleton of Wells' novel-plot, and for good measure ratchets up the sex and violence as well.

I don't want to sound like I believe that every horror-script writer in the early 1930s was looking to the success of FRANKENSTEIN for inspiration.  However, WEREWOLF OF LONDON-- the first English-language film to attempt creating a consistent mythology for the werewolf-- may have borrowed at least two concepts central to the 1931 Whale opus.  One concept is fairly generic, in that the victim-protagonist of WEREWOLF is a delver into strange secrets who from one point of view may have been cursed because he meddled with the unknown.  The other concept is a little more specific .  The 1931 FRANKENSTEIN, in contrast to the Shelley novel, hints at a possible romantic interest between Elizabeth, the fiancee of mad Henry Frankenstein, and Henry's best friend Victor Moritz.  Though nothing ever comes of the suggestion in the film as completed, in my opinion the only reason a scripter would have suggested the possibility of  a "rebound romance" would have been if an early version of the film was meant to end in Henry's death, so that Elizabeth would have a "consolation prize" waiting for her.

In any case, jealousy over a romantic rival, which plays nearly no role in FRANKENSTEIN, is central to this 1935 Universal film, whose script is credited to four writers and is directed by Stuart Walker.  All five seem to have been journeymen talents, with WEREWOLF OF LONDON standing as the most noteworthy work any of them produced.

Botanist Doctor Wilfred Glendon of London could be said to have created his own romantic travails.  Like Frankenstein, he invests too much attention to his scientific investigations, thus forfeiting-- in a symbolic sense, at least-- his ability to keep his much younger wife satisfied.  That said, we don't know anything about Glendon's home life when the film begins.

He's first seen, along with fellow traveler named Renwick, hiking through misty Tibet with a gang of bearers.  The bearers revolt and refuse to go further once they learn that the Englishmen want to explore a valley rumored to be haunted by demons.  The bearers run away when they see an apparition that they mistake for a demon, though in truth it's a Catholic missionary.  Though not precisely subscribing to the locals' beliefs, the missionary warns Glendon and Renwick away from the valley.  The Englishmen ignore him and press on alone.

Oddly, when the two men enter the valley, they experience weird effects, with Renwick feeling as if he can hardly move his legs, while Glendon feels some invisible force strike him.  Glendon explains the effect as one of "autosuggestion;" the words of the Tibetans and the missionary have semi-hypnotized them into expecting trouble.  Renwick is so tired from his efforts that he rests while Glendon presses on in search of his botanical "holy grail."  He finds the rare flower "Mariphasa," a dormant flower that is rumored to bloom only by moonlight.  He takes cuttings of the plant, but no sooner has he stowed the cuttings in his pack than he is attacked by a shadowy figure.  The stranger bites Glendon on the arm, but Glendon drives his attacker off with a knife.  Despite his wound, Glendon manages to escape the hostile-seeming valley-- presumably with Renwick, though we never hear anything more of Glendon's traveling companion.

Back at Glendon's manor in London, we meet Glendon's wife Lisa, who immediately makes clear her disaffection from her husband's scholarly interests, as she comments that he ought to marry his laboratory.  She's clearly more attached to the London high-life than he, expecting him to drop his researches in order to attend the party she's hosting.  The party serves to bring two other significant characters into Glendon's orbit.  The first is Paul Ames, a childhood friend to Lisa, with whom she had a romantic relationship that ended badly some time before she married Glendon-- suggesting that in a sense Glendon was the real "rebound romance" here.  The second is another botanist, a Doctor Yogami, who claims to have met Glendon abroad.  Yogami possesses intimate knowledge of Glendon's current line of research, an attempt to cause the reluctant Mariphasa flower to bloom via exposure to artificial moonlight.  Yogami's words impart what some critics would call a "liminal" quality to the flower, claiming that it shares qualities of both plant and animal.  Not coincidentally, Glendon's London laboratory includes at least one animal-eating plant, which symbolically sets the stage for the appearance of a hybrid between man and animal.

Yogami mentions that the Mariphasa is a vital flower to those afflicted by the disease of "werewolfery," though he stops short of admitting what the audience will surely intuit: that Yogami himself is so afflicted, and so is Glendon.  Yogami conveys all this information in the hope of persuading Glendon to let Yogami share in his research.  But though Glendon fails to connect Yogami with the strange man who attacked him-- even when Yogami references Glendon's wounded arm-- the botanist insists on keeping his findings secret.  Yogami dolefully admits that the cuttings of the Mariphasa provide only a temporary antidote to the werewolf malady.

Soon enough, Glendon realizes that he shares this malady. He returns to his researches, and succeeds in causing the Mariphasa to bloom with his artificial moonlight.  However, the moonlight also causes Glendon's hair to sprout fur.  He quickly uses the bloom's juice to reverse the effects. Strangely, in his next encounter with Yogami (the next day?), Glendon still plays things close to the vest, even when Yogami informs the botanist that the werewolf kills that which it loves best.

Glendon has no more room for doubt the following full-moon night.  Shortly after having had his jealousies aroused as Lisa continues to visit with her old flame, he transforms into full wolf-man mode.  He seeks out the curing Mariphasa blooms, only to find that the flowers have been removed by persons unknown.  Fearing that he will fulfill the destiny of the werewolf, Glendon flees his house into the street.  The next day's papers carry news of a woman being mangled to death.

Glendon returns home, but again he and Lisa quarrel over her continued assocation with Paul-- though, to be sure, Lisa is never seen to violate the marriage covenant.  Again, as the moonlit night approaches, Glendon flees his house, this time taking a room in a low-class part of the city.  That night, the werewolf strikes again, this time providentially targeting a slutty young woman who's trying to talk a married man into leaving his wife.  For good measure, her killing takes place in a zoo, causing the authorities to get confused as to whether there's a real wolf causing the killings.

One of the archetypal scenes of werewolf-fiction-- the scene in which a werewolf's friend locks him up to prevent his killing-- transpires the next night, though Glendon's helper remains ignorant of the reasons why the botanist wants to be confined to a cell in an abandoned abbey located on the property of Lisa's family.  The cell fails to keep wolf-Glendon confined, and as it happens, Paul has brought Lisa to the abbey that night, trying to talk her into leaving her husband.  Glendon attacks both of them.  However, as shown by the comparatively easy way Glendon drives off the Yogami-werewolf in Tibet, wolf-Glendon is also fairly vulnerable, and Paul manages to stun him so that the couple can escape.

After that, Paul begins to put the pieces together, in part because Yogami, desperate to find some way to access the Mariphasa, insinuates himself into the police investigation of the murders.  The piecing-together is for me the weakest section of the film, however necessary.

In any case, the police finally decide to converge on Glendon Manor.  So does Yogami, looking for more blooms.  He finds them, but by using them on himself, he makes himself vulnerable to wolf-Glendon.  Yogami dies, but the cops show up in time to shoot down wolf-Glendon like, well, a wolf, which leads to yet another archetypal scene: the reversion to normalcy in death.

WEREWOLF is a better than average horror-film, but it lacks that extra "something" that makes an exemplary film-- such as the more well-lauded WOLF MAN.  It's interesting that parts of WOLF MAN suggest that its scripter was playing around with the notion that the "werewolf malady" in that film really was brought on by superstition and "autosuggestion."  The fantastic events of the Tibetan valley-- which seem more like spiritual forces than scientific phenomena-- seem almost prophetically poised to reject this sort of false rationalism.  Both the improbable moonlight-blooming Mariphasa and the strange "werewolfism" disease exist outside the bounds of rational thought; they reflect one another's natures in a way that Western science would never recognize.  Glendon, by pursuing strange forms of life, becomes a strange form of life.  Perhaps it happens in part because of the gulf between him and his wife, but Walker and his scripters nonetheless suggest that the world of WEREWOLF OF LONDON is far stranger than science can comprehend.  Of the early 1930s Universal films, perhaps only 1932's THE MUMMY so thorougly rejects commonplace rationality-- though it too, like WOLF MAN, is a far more profound work.
Posted by Gene Phillips at 3:06 PM
Email ThisBlogThis!Share to TwitterShare to FacebookShare to Pinterest
Labels: the marvelous