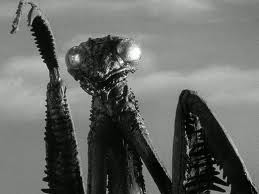 
Though William Alland was credited as producer on several of the key "creature features" of the 1950s, only rarely did he officially assume writing-duties on the screenplays of the movies he produced.  DEADLY MANTIS is one of those few, where Alland shares credit with Martin Berkeley, with whom he previously collaborated on 1955's REVENGE OF THE CREATURE.

As I demonstrate in my review of the 1955 film and its sequel, REVENGE, the middle film of the series, is the only one of the "Creature trilogy" that does not set up a rivalry betweeen two male leads engaged in hunting the titular monster.  Whether by coincidence or design, the Alland-Berkeley script for MANTIS also eschews such rivalry, even though, unlike REVENGE, MANTIS has two distinct male leads who could have had a rivalry over the starring female while they pursued the menacing monster of the title.  Also on the reunuion-front, this film also reteamed Alland with director Nathan Juran, whose first directorial effort was Alland's 1952 THE BLACK CASTLE-- the first of many fantasy-films for both Alland and Juran.

In contrast to many of the nuclear-mutant monsters of the period, the Mantis is entirely the product of nature, and it's theorized that the creature only shows up because it's been entombed in ice since prehistoric times and has been released by a volcanic eruption.  The first half-hour devotes much attention to the efficiency of the United States' early warning radar system (similarly emphasized in 1954's KILLERS FROM SPACE), a system which the Mantis soon transgresses.  Unlike the ants of THEM!, however, this big bug never takes on any symbolic resonance of the Commie Menace.

Colonel Joe Parkman (Craig Stevens) tries to find out what sort of entity could wipe out an entire military outpost, and consults with various specialists, including the one who will be most in the forefront of the investigation, Dr. Nedrick Jackson (William Hopper).  Ned happens to be friends with Marge (Alix Talton), a lady reporter working for a science magazine, who smells a hot story when she learns of the consultation.  She manages to get assigned to follow Ned to Canada, where she and Ned meet Joe-- whom she eventually falls for-- and a lot of other female-deprived G.I.'s.

The Mantis makes its first attack on Joe's outpost while both Ned and Marge are present.  In fact, the way this big bug attacks-- looming over one of the buildings, and first seen (and screamed at) by the female lead-- mirrors a similar scene in Alland's earlier film TARANTULA (1955).  The Mantis tears up buildings, kills some more people, and flies off.  Later Ned deduces that in prehistoric times the Mantis once preyed on the ancestors of human beings, explaining that the big bug still considers modern humans its proper prey.  The Mantis dodges the attempts of jets to shoot it down, but eventually takes on America in a symbolic sense by descending upon Washington, D.C.  The incredible insect ends up in the Holland Tunnel and dies when Joe manages to lob a bomb in its face.  Anticipating the 1980s rage for killers who revive briefly for one last scare, the Mantis's claw briefly menaces Marge, but Ned explains that the movement was merely a reflexive one.

The Mantis marionette is the film's standout asset,  Hopper, Stevens, and Talton do credible enough jobs with what they're given, but Alland apparently wanted no human conflict between the leads, as we would have had if there had existed some romantic relationship between Ned and Marge prior to her liaison with Joe.  The script supplies some moderately enjoyable scientific detective work by which the Mantis' existence is deduced prior to its appearance.  The female lead of CREATURE FROM THE BLACK LAGOON represented an advancement in feminine roles in SF films, while the female lead of REVENGE OF THE CREATURE is something of a step back.  Marge, however, is just "there," not registering as much of a positive or negative.
Posted by Gene Phillips at 3:20 PM
Email ThisBlogThis!Share to TwitterShare to FacebookShare to Pinterest
Labels: the marvelous