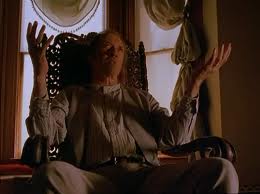 
Now that I've finished watching the first six sequels to the original 1984 CHILDREN OF THE CORN film, I've decided that there really isn't any deep symbolic reason as to why the franchise has lasted so long.  Now I tend to believe that the main reason is economic.  Entries in the series are always going to feature young actors with few to no credits, which keeps the producers' costs down, even if they may turn around and hire a few "big names" to spice up the appeal to renters.  On top of that-- how much does it cost to maintain cornfield sets?

Not surprisingly, the next three in the series get further and further from the original concept of the Stephen King story.  Five, Six, and Seven are all inferior entries in a dubious franchise, though they're mounted well enough that they're still better than most SYFY channel dreck.

CHILDREN V is subtitled FIELDS OF TERROR.  Perhaps the original intention was FIELDS OF SCREAMS, to play on a famous film-title, and some lawyer said "no."  It's the weakest of the sequels, as it returns to an almost empty plot-well: dopey teens in trouble with supernatural evil.

A new locale, Divinity Falls, takes the place of Gatlin, Nebraska, but at least, in contrast to THE GATHERING, the demonic child-cult still worships "He Who Walks Behind the Rows," that devilish corn-god.  However, the deity takes an unusual form here, that of a fire-creature who lurks within a grain-silo.  Addtionally in a move that goes against the whole "kids vs. adults" trope, the demon-kids have a old man as the leader of the cult, fanatical Luke Enright (a spacy David Carradine).

In addition, one of the trespassing teens-- lead character Alison-- happens onto the cult without knowing that her long-lost brother Jacob is a member.  Jacob must struggle against his allegiance to the cult and his loyalty to his sister, recalling a similar struggle in CHILDREN III.  In addition, the most dedicated of the evil kids is again a kid of middle-school age.  In general throughout the series it's the younger kids who are the most dangerous, while the older ones are capable of being lured away from the cult by sexuality or by earlier relationships.

In contrast to earlier films in the series, there's far less attention given to designing elaborate deaths for the victims of the children, which helps to make the film even duller than its rambling plot. 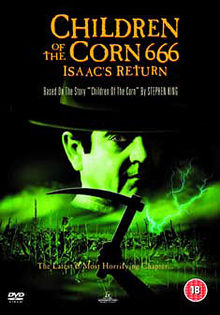 The script of CHILDREN 666, subtitled ISAAC'S RETURN, makes the greatest attempt to ground its mayhem in the original events of Gatlin, Nebraska, for it revives "Isaac," the leader of the child-cult from the first film. In addition, protagonist Hannah is the full-grown offspring of Rachel, a character who had been one of the original Gatlin kids.  Hannah is raised by adoptive parents, but chooses to visit Gatlin to find out the truth about her mother, partly because Hannah is tormented by recurring weird visions.

Naturally, weird things happen to Hannah as soon as she arrives. She meets an old street-preacher who, unlike most preachers in this series, actually seems to have read the Bible, for he seems to know about her visions and draws a comparison between Hannah and the Biblical seer Samuel.

Isaac, who has not aged since being put in a 19-year sleep by his corn-god, is told that he spawned a son previous to that sleep.  Isaac, desiring a "pure race" to serve the corn-god, plans to wed his son Matt to Hannah.  There might have been some mythic potential in this plot, given the association of corn-rituals and fertitlity.  But any such potential gets lost because the script introduces too many characters, none of whom take on any distinctive personalities, not even Stacy Keach's woeful Doctor Michaels or Nancy Allen as Hannah's mother, who tried to prevent Hannah's involvement in the cult's business.  Still, there are some decently creepy scenes, as when the street preacher tells Hannah that she should never have been born-- a feeling some adoptees have experienced for mundane reasons. 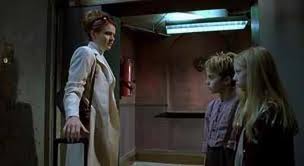 CHILDREN VII, subtitled REVELATION, makes only minimal use of the Gatlin mythology, as heroine Janie, seeking her missing grandmother in not-so-rural Omaha, stumbles across a new cult of evil children, who also apparently worship "He Who Walks Between the Rows."  As Janie follows clue after clue, seeking to learn if her grandmother is dead, she learns that the woman had once been a member of a religious cult, and that she's been reclaimed by the child-cult.  The motives of the cult seem murkier than ever in this sequel, but REVELATION is at least superior to the previous two in presenting assorted creepy scenes, though there's too much reliance on dream-sequences.

The one standout characteristic of this sequel is that Janie is an atheist and declares vociferously that her grandmother was the same.  Only later does she learn that this posture was a cover for the grandmother's earlier activities-- and more importantly, that the corn-god is real.  In contrast to the pagan explanation from CHILDREN II, a Christian priest (Michael Ironside) identifies the creature with the devil, and this may be closer to the original intent of Stephen King's story than any other interpretatiom.  Unsurprisingly, REVELATION doesn't manage to reveal any level of metaphysical complexity with its simplistic approach.

Posted by Gene Phillips at 2:30 PM
Email ThisBlogThis!Share to TwitterShare to FacebookShare to Pinterest
Labels: the marvelous