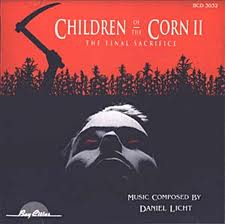 His short story "Children of the Corn," best known from King's 1978 short story collection NIGHT SHIFT, seems like one of the least likely subjects to spawn a long-running series of films, some (though not all) of which went straight to video rental shelves.  The short story concerns a feuding husband and wife who make the mistake of driving their car into the small Nebraska farming community of Gatlin. There the intruders learn that all of the adults were killed by the town's children, whose Christian roots have been confused with the worship of a literal pagan deity called "He Who Walks Between the Rows."  Aside from the dark portrait of a dissolving marriage, the story functions largely to satirize the association of Christianity with children's innocence, for the doomed duo learn that the children's religious independence arose from the local church's exploitation of kids as "child preachers."

I have seen but did not re-screen the 1984 CHILDREN OF THE CORN film.  However, all six of the sequels appear on a recent DVD, so I determined to examine them for clues to the franchise's appeal.

CHILDREN II, subtitled THE FINAL SACRIFICE, takes place after the chaos of the previous film, as state authorities and local reporters investigate the holocaust in Gatlin.  None of the investigators know that the ancient corn-god is real, and believe that most of the children involved were innocent pawns of some older kids who perished in the first film.  The town of Hemingford attempts to take the survivors into private homes in order to give them new lives, but though a few of the kids drift away from the faith, one boy named Micah is literally possessed by the spirit of the corn-god and begins using supernatural powers to continue sacrificing adults.  Reporter John Garrett-- who comes to town quarreling with his teenaged son, a loose reworking of the original story's conflict-- pursues the history of Gatlin.  The script introduces an educated Native American professor who believes in the reality of the kids' savage deity, though he claims that the god's depradations are a reaction to the evils of mankind.  It should be noted that King's story involves neither Native American mythology nor any elements of conservation.  There's also a confusing subplot in which it's revealed that a corrupt individual plans to sell tainted corn on the open market, with the suggestion that some of the toxin in the corn may have brought about the children's religious visions-- though this would seem a needless elaboration, since it's well established that "He Who Walks Behind the Rows" is the Real Thing.

That said, though the script and the performances are never better than fair, CHILDREN II moves along smartly.  There's a jokey invocation of the 1939 WIZARD OF OZ film, in that one of the children's victims is an old woman named "Ruby," killed by having her house dropped on top of her.  Ruby is mourned by another future-victim by the name of "Mrs. West"-- as in "Wicked Witch of the West." 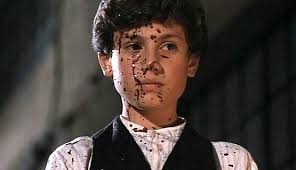 CHILDREN III, subtitled URBAN HARVEST, picks up the previous film's idea of situating some "wild children" with a normal family.  The film introduces two kids, middle-school-age Eli and high-school-age Joshua, who at first blush seem unrelated to the events in Gatlin.  Both boys are abused by their father, and are then orphaned when Eli-- who is actually one of the kids from Gatlin-- covertly kills their paternal guardian.  A couple in Chicago adopts the two kids in order to give them a normal family.  Both boys continue to wear the severe Amish-like attire they were raised with, but though both experience difficulties with socialization at school, the older Joshua sways from the faith thanks to an attractive high-school girl.  In contrast, the younger Eli remains devoted to the corn-demon, and attempts to bring the children of Chicago into his fold.  Killings multiply, but in the end Joshua turns on his evil little brother, defeats him and exorcises the monstrous "He Who Walks, etc."  However, again there's a subplot about toxic corn, and the film ends on the suggestion that the corn-god will again find a new following. 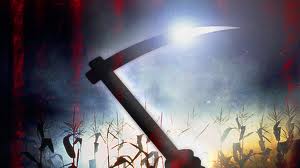 CHILDREN IV, subtitled THE GATHERING, is the first straight-to-video film, barely no connection to the events in Gatlin, though Wikipedia notes that there was a deleted scene that connected the primary possessed-kid, name of Josiah, to "He Who Walks."  However, director Greg Spence, who co-wrote the film with another writer, returns to one of the elements of King's story, that of the "child preachers."  When medical student Grace Rhodes (Naomi Watts) looks into the cause of mysterious diseases beseiging her Nebraska town, she finds that Josiah, the source of the evil, was once a "child preacher" exploited by a traveling tent-show.  Not only did greedy adults exploit Josiah-- who never grew out of his childhood, whether for natural or supernatural reasons-- they also "gave him over to darkness" in some way.  Thus Josiah, like previous evil kids, practices all sorts of black magic and attempts as usual to convert local kids to his cult.

Though the plot is routine, Spence-- who at present has directed only one other film, PROPHECY II  -- exceeds the previous two directors in the series, using close-ups and unusual angles to imbue the fourth CORN flick with a brooding sense of darkness and pessimism.  The gore quotient is much more impressive for this reason, and the victimization of the town's kids seems more troubling. Naomi Watts gives a solid performance, as do veteran actors William Windom and Karen Black.  Thus far GATHERING is the best sequel I've re-watched, and may well exceed the 1984 progenitor of the series, given that my memories of that flick are less than stellar.


Posted by Gene Phillips at 2:26 PM
Email ThisBlogThis!Share to TwitterShare to FacebookShare to Pinterest
Labels: the marvelous