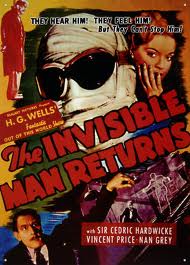 
THE INVISIBLE MAN RETURNS was the first in a fair-sized line of sequels to Universal's 1933 classic THE INVISIBLE MAN.  It's an adequately polished movie, but by its choice of formulas-- a man on the run trying to prove his innocence-- it naturally bypasses the theme common to the previous film and the originating novel: the theme of the scientific over-reacher.  In RETURNS, the new unseeable individual, Sir Geoffrey Radcliffe, isn't even a scientist.  After he's unjustly sentenced to death for the murder of his brother-- the owner and manager of a mining-company-- Radcliffe is given the opportunity to escape jail by the scientist-brother of Jack Griffin, the original Invisible Man, who died nine years previous to the 1906 date of the film's continuity.

As in the 1933 film the film's ticking clock has less to do with Radcliffe's race to find his brother's true killer while eluding the police than the fact that, as in the previous film, the drug that induces invisibility will also cause madness in the subject.  Radcliffe-- played, or more properly, voiced for the majority of the film by Vincent Price in his first horror-film role-- slowly begins to succumb to the same kind of megalomaniacal dreams of power experienced by his predecessor.

Price's sonorous voice is always enjoyable, especially when he torments a fellow who mysteriously moved up in the mining-company (played by Alan Napier of 1960s BATMAN fame).  Radcliffe eventually finds the murderer, but unlike Griffin he has a happy ending, being saved from death for his grateful fiancee.  The film's main attraction are a few of the better FX-scenes and a gallery of enjoyable 1940s jobbing actors, especially Cecil Kellaway as a genial but nonetheless dogged police inspector who pursues Radcliffe.  The film's mythicity is pretty low though it's interesting that there's a scene in which the miners give a resounding vote of confidence for Radcliffe, which might be interpreted as a show of support for the aristocratic values he embodies. 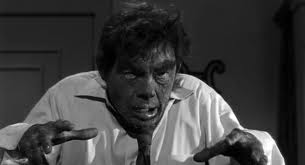 THE VAMPIRE is not as rich in familiar faces, though it does include supporting roles for Colleen ("LEECH WOMAN") Gray and Kenneth ("THE THING") Tobey.  The central role, small-town doctor Paul Beecher, is essayed by the competent but unexciting John Beal.  The opening scenes make clear that Beecher is something of a small-town Samson, bearing the weight of the community on his shoulders.  The widower-doctor also seeks to prosper in the quiet town while raising his small daughter, even though many of his clientele pay their bills in vegetables or livestock.  He has a very pretty nurse (Gray), but though Beecher doesn't have anything going with her at the film's inception, he seems to have some thoughts in that direction as he tries to steer away any possible competition.

This "nice guy" doctor is victimized not by his own research but that of a local scientist named Campbell, who like Stevenson's Doctor Jekyll wants to find ways to control human nature through chemistry.  Beecher is summoned to Campbell's home when the mans health fails. Campbell passes on to Beecher-- without adequate explanation-- special pills which he derived from vampire bat-blood.  By accident the hard-working doc suffers a migraine (brought on by his labors?) and takes one of the pills, thinking that it's a migraine tablet.  The pills cause him to desire the taste of blood like a vampire bat, and he begins to slake his thirst on the local population.  His depradations are not shown on-camera and only once does he transform into a sort of Mister-Hyde-like creature before being brought down.

The most interesting myth-angle of the film is psychological in that even though Beecher is innocent of wrongdoing, he ends up attacking the very community he formerly protected, as well as almost killing his potential love-interest-- though the film avoids placing Beecher's small daughter in peril.  This was the first of a trio of low-budget metaphenomenal films made by director Paul Landres and writer Pat Fiedler, followed by first THE FLAME BARRIER and then RETURN OF DRACULA in 1958.  Of the three, RETURN OF DRACULA proved a more traditional and well executed experiment with the myth of the vampire.
Posted by Gene Phillips at 3:31 PM
Email ThisBlogThis!Share to TwitterShare to FacebookShare to Pinterest
Labels: the marvelous