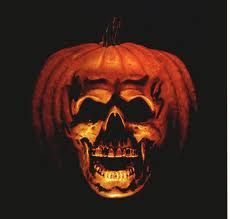 
I noted at the conclusion of my HALLOWEEN review that if there had never been another film in this franchise, it might be hard to judge the original as being either "uncanny" or "marvelous."  Slasher Michael Myers takes a significant amount of punishment from both Laurie Strode and Doctor Loomis, but at the end of the film it's just marginally possible that the killer has simply crawled away to die.

HALLOWEEN II, picking up mere moments after the first film, references the fact that Michael, a.k.a. "the Shape," was shot six times by Loomis.  But when the audience first sees Michael, he shows no sign of having taken any wounds, and at no point is his slaughter-spree slowed down by having six bullets in his body.  Almost none of the victims of Michael's spree manage to inflict any wounds on the killer, and only at the climax does he take about four shots, again from Loomis, which he shrugs off before killing another victim.  Michael seems to have some limitations on his "healing powers," for shortly thereafter Laurie shoots him in the eyes and blinds him for a time.  Loomis apparently destroys "the Shape" in a fiery explosion, though as most horror-fans know later filmmakers found a way to exhume Michael for Part 4 of the series.  At the time writer-producers John Carpenter and Debra Hill intended this film to be the swan song for the Shape.

Sadly, while the original film is a masterpiece of pacing, the sequel stretches out its thin premise with draggy, psuedo-suspenseful scenes courtesy of new director Rick Rosenthal.  Despite all the commotion generated by the Haddonfield police upon discovering three dead bodies and sending the injured Laurie to the local hospital, somehow Michael manages to have the run of Haddonfield as he stalks around, killing both men and women-- though, to be sure, female victims receive a little more attention here than in the first film.  Given the almost total absence of medical activity, the hospital in Haddonfield seems more like a morgue, which is symbolically right but still makes the place seem far more conveniently deserted than any real hospital should be.

Michael shows a little more sadism in his murders this time, as when he plunges one nurse's face into a super-hot tub and drains another's blood from her body.  Arguably, the first film shows a little of this propensity, as when the killer dresses in a "ghost costume" in order to take some pleasure in fooling his next victim.  But there's little of the first film's sense of Michael being an incarnation of evil and/or impending fate. The narrative also retcons the original story to make the slasher the long lost brother of Laurie Strode.  This is at least an interesting development, in contrast to a clumsy scene in which Loomis and a cop ally find that Michael has written the word "Samhain" near the site of one of his murders.  I've seen it suggested that, since Michael spent most of his time at the insane asylum as nearly inactive, possibly the legend of the Celtic version of Halloween was mentioned to Michael by his then-analyst Loomis.  However, though Loomis promptly pontificates on the subject of Samhain for the audience's benefit, he never admits that he is the source of Michael's sudden interest in comparative religion.  Possibly Hill and Carpenter thought it was an ambivalent means of suggesting "pure evil" again, or bringing a "Halloween" theme back into the story since all the trick-or-treaters would've gone indoors by that hour.  Still, the scene doesn't offer any real payoff here. 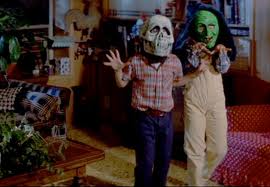 In contrast, though HALLOWEEN III has a lot of problems, it's never as dull as Number Two frequently is.  If it had been successful, possibly Hill and Carpenter would have continued the franchise along the lines of THREE, with each new film pursuing new plotlines on a general Halloween theme.

The finished script of THREE is credited to director Tommy Lee Wallace, though an early version was written by Nigel Kneale, who withdrew his name from the movie when producers insisted on an elevated level of goriness.  THREE is indeed much gorier than the first two HALLOWEEN films, but it rather fits the new concept, in which the "witch" of the title seeks to bring back the Celtic custom of massive ritual sacrifice.  At very least it's a better use of the Celtic-Halloween theme than we see in TWO.

Doctor Dan Challis (Tom Atkins), father and somewhat browbeaten husband, happens to be on duty at a California hospital when an injured man, brought in for medical attention, is murdered in his hospital room by a mysterious, passionless assassin.  The same assassin then covers his tracks by setting himself, and the car he occupies, on fire.  What Dan does not know-- though the audience does-- is that the killer is one of several identical androids.

The patient's pretty daughter Ellie shows up at the hospital, swearing to find out why her father was murdered.  Dan is both curious about the murder and intrigued with the young woman, and he accompanies her to investigate the victim's last place of employment: the Silver Shamrock Novelties Factory, located in Santa Mira, California.  Ellie is apparently impressed with Dan as well, for upon reaching a motel in the factory-town, she goes along with their masquerading as a married couple.  She also ends up sleeping with Dan rather quickly, considering that her main goal ought to be finding her father's murderer.

Dan and Ellie learn that Ellie's father sought to expose a massive plot by Irish-born factory-owner Conal Cochran (Dan O'Herlihy) to sacrifice dozens upon dozens of trick-or-treaters to his pagan gods.  One might consider it the super-villain's answer to "tainted Halloween candy."  Cochran's factory produces mass-produced masks that have the capability to kill those who wear them, though as a means of explaining why he's doing this for the first time in 1982, the villain helpfully explains to Dan that the stars have to be "in conjunction" before the sacrifice is made.

On the plus side, long before the nature of the peril is known, the film continually foregrounds Cochran's masks through a barrage of television ads, urging all the kiddies to don their masks at just the right time. On the minus side, it's vague as to what powers Cochran commands.  His identical android-servants seem like pure products of scientific innovation.  However, though the audience is set up to think that the masks are also mechanical menaces, the one time they're used, they unleash what would have to be mystical effects, in that a kid's mask fills up with insects and snakes.  The villain also steals a "bluestone" from Stonehenge to make his plan work, and the stone gives off an assortment of weird effects at the climax.  Dan manages to achieve an initial victory over Cochran's forces, though the film ends on an ambivalent note, so that the viewer doesn't know if he manages to avert the crisis fully.  While some films are stronger when they attempt this type of "maybe-unhappy ending," the attempt in THREE merely seems to come out of left field.

Posted by Gene Phillips at 3:39 PM
Email ThisBlogThis!Share to TwitterShare to FacebookShare to Pinterest
Labels: the marvelous