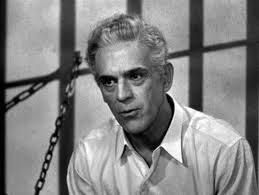 I've always admired a phrase coined by William K. Everson to explain the appeal of Boris Karloff's acting-persona: Everson said Karloff looked "brutal yet sensitive."  To the best of my knowledge not much of the actor's silent-era work contributed to this balance of opposed qualities: not until after he essayed the Frankenstein Monster did Karloff manage to create the persona that made him arguably the most renowned American horror star of Classic Hollywood.

THE MAN THEY COULD NOT HANG, the first of three Columbia films directed by journeyman Nick Grinde (also a collaborator on BABES IN TOYLAND), is also the best of the trio.  It's also one of Karloff's best "mad scientist" roles, boosted in part by the screenplay of Karl Brown (who also scripted the other two films in the "series.")  In contrast to some films, in which the over-reaching scientist is condemned for meddling with the works of God, HANG defends the attempts of science to bring about radical new advances.  True, the dedicated scientist becomes so obsessed with his discovery that he becomes a dead-alive monster, bent on avenging the wrongs done him.  But in part society's purblind conservatism has contributed to the creation of the monster.

Dr. Savaard (Karloff) dedicates himself to finding a way to cryogenically preserve bodies with fatal injuries in order to resurrect them afterward.  A young man volunteers to be a guinea pig, which is to say that he must be killed before he can be resuscitated.  The volunteer's girlfriend reveals the experiment to the police, who arrive in time to find a dead body, but they refuse to let Savaard finish his experiment.  Despite an impassioned plea to his jury on behalf of science's prerogatives-- the high point of the film-- Savaard is condemned to hang.

However, a loyal assistant manages to claim the scientist's body quickly enough to subject it to the resurrection procedure.  Alive but embittered, Savaard decides to seek vengeance on the judge, jury, and coroner who sentenced him.  He gives his future victims an invitation to a mysterious party, not unlike the situation of the earlier NINTH GUEST, reveals himself to his guests and sets in motion their deaths-- one from an electric gate very like that of the earlier film.  Only the intrusion of Savaard's innocent daughter on the party keeps the body count relatively low, and inevitably results in the doctor's reacquaintance with death.  But despite his murderous acts, Savaard keeps the audience's sympathy to the last. 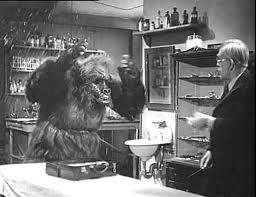 THE APE was released just weeks after the last of the Karloff-Grinde-Brown films, BEFORE I HANG. I didn't like THE APE at all when I first encountered it, but I don't think it was because of its premise, though it is particularly preposterous even for a low-budget mad-scientist flick.

Doctor Adrian (Karloff), a scientist ostracized by his peers for his far-fetched theories, comes to live in a small country town.  He cherishes a desire to do away with paralysis diseases, and so comes to form a paternal interest toward pretty young Frances, a girl confined to a wheelchair by polio.  The locals regard  Adrian as something of an odd duck, and Frances' fiancee Danny seems vaguely threatened by the old man's attentions.

This status quo is interrupted by the appearance of a traveling circus outside town.  A caged gorilla (played by renowned gorilla-man Crash Corrigan) escapes after mauling his abusive trainer. The townspeople bring the trainer to Adrian for treatment, but since the man is almost dead of his wounds, Adrian finishes him off by drawing spinal fluid from the trainer to create an anti-polio serum.  His initial test on Frances works, but he needs more spinal fluid.

The gorilla, wandering in the wild and terrifying the locals, happens to invade Adrian's laboratory.  Adrian very improbably manages to kill the animal.  Somehow the animal's presence gives Adrian the idea to skin the dead beast, wear it as a costume and pose as the ape in order to kill unworthy members of the community and harvest their spinal fluid.  The good doctor continues to terrorize the town although, as with HANG, the body count is rather low.  As a result of Adrian's exploits, Frances's polio is cured, but he's caught during one of his night-time peregrinations-- ironically, because Frances sees the "ape" and calls the constables to attack and kill the "creature."

In my first viewing of the film, I think that I disliked the film because the audience never delivers a "monster," just a man bumbling around in an ape suit. At least HANG shows its mad scientist looking creepy and cadaverous.  The film employs two uncanny tropes-- the "astounding animal" trope for the rampage of the real gorilla, and the "outre outfits" trope for Adrian's simian masquerade.  However, the element of the miraculous polio-cure transports the movie into the domain of the marvelous.
Posted by Gene Phillips at 3:59 PM
Email ThisBlogThis!Share to TwitterShare to FacebookShare to Pinterest
Labels: astounding animals (u), outre outfits (u), the marvelous