In my review of the Laurence Olivier HAMLET I aligned the film with the trope of the "phantasmal figuration," which subsumes those works in which there's a question as to "whether or not to take the fantasy-material at face value."  The 1969 HAMLET strongly resembles the 1948 production in seeking to avoid the problem "is the ghost real or not" by not letting the audience see a spirit in either of the two scenes where it appears.  If anything, director Tony Richardson-- whose only other contribution to fantasy-cinema is the 1990 PHANTOM OF THE OPERA-- is even more abstemious than Olivier in this respect.

Because this production was entirely filmed in the Roundhouse theater, constructed from a deserted train-shed, Richardson keeps his lens focused on the actors either in close-up or at middle-range.  Perhaps the intent was to make this HAMLET more intimate and less defined by cinematic "pomp and circumstance."  Unfortunately, the actors sometimes seem rushed to finish their speeches, unable to fall back on the long stage-tradition of using props for "bits of business."  Nicol Williamson's Hamlet is particularly plagued by this stagecraft-problem.  And although some critics do put Hamlet in his early thirties, which Williamson was at the time, his advanced balding makes him look older, and clashes with the dominant sense of the Danish prince as a book-learned naif.

However, one of the well-trod paths that Richardson does not follow is Olivier's over-emphasis on the Freudian angle.  True, the word "incest" still appears as often as in the play, but there's no mouth-on-mouth kiss here, as in Olivier's version.  In fact, during the infamous scene where Hamlet confronts his mother in her bedroom to chastise her for her waywardness, Williamson's Hamlet seems not at all like a son filled with concupiscent lust for his parent, but like a confused child in a man's body.  One reviewer complained that a kiss between Ophelia and her brother Laertes went on long enough to suggest some greater intimacy, but I didn't get that vibe.

Most of the male performers deliver professional but unexciting turns, with Anthony Hopkins' Claudius a particular disappointment.  The lead females, however, seem to flourish with Richardson's up-close-and-personal approach.  Judy Parfitt makes a Gertrude with a "Mona Lisa" inscrutability and singer Marianne Faithful essays an impassioned Ophelia. 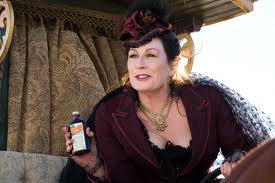 The main plotline of wrtier-director David Von Ancken's SERAPHIM FALLS covers much the same ground as Fritz Lang's "revenge melodramas" like THE BIG HEAT and RANCHO NOTORIOUS.  However, whereas Lang supplies his audiences with up-front details on why his protagonists have hit the revenge trail, Von Ancken delays the backstory for over half the picture.  Thus one does not know whether to empathize with Pierce Brosnan's fugitive Gideon, or his pursuer, Liam Neeson's Carver, though the latter is somewhat more unsympathetic in that he has a gang of mercenaries working with him to track down Gideon.  When the backstory is revealed, it apportions a certain sympathy to both characters, instead of taking Lang's path, in which the audience wants to see the protagonists take down the villains despite the awareness that vengeance corrupts Lang's heroes.

The only metaphenomenal elements here are two strange individuals who appear in the story toward the last half-hour, when Carver pursues Gideon through an arid desert.  One is a Native American (Wes Studi) with a philosophical turn of mind, and the other is a female drummer (Angelica Huston) with a wagonload of goods.  Neither one does anything that's especially fantastic, except that Huston's character pops up as if out of nowhere in one scene.  Von Ancken does give both of them myth-derived names, for the name on the drummer's wagon is "Louise C. Fair" (Lucifer), while the Indian, given no name in the storyline, is billed as "Charon." Some comments assert that they must be either the angels or the devils of the Christian tradition, but neither character conforms to the myths of angels or devils, much less the tales of the Greek boatman of the dead.  Presumably Von Ancken's use of these names, both associated with meting out fate to the dead or dying, means that the two men will perish following the picture's conclusion, though as it happens the enemies manage to forgive one another before the end.  But if anything, the actions of these two ambivalent figures carries the resonance of the Amerindian trickster-gods, who are merely amused to watch two mortals fighting for their lives.  However, Von Ancken's script is not ambitious enough to make these mythic references amount to anything.
Posted by Gene Phillips at 3:07 PM
Email ThisBlogThis!Share to TwitterShare to FacebookShare to Pinterest
Labels: phantasmal figurations (u), the uncanny