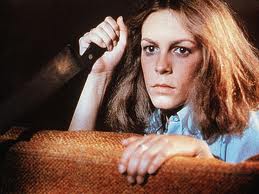 
Though the original HALLOWEEN probably hasn't been as extensively critiqued as the original PSYCHO, there's been so much written on John Carpenter's breakout work that it can be daunting to try saying anything new about it.

However, I have one advantage in that I believe a great deal of the criticism that has focused on the sexual elements of HALLOWEEN has been misapplied.  I'm not saying that there are no sexual elements in the film, but I don't believe they are the center of the film. It should be noted that Carpenter's previous two films, DARK STAR and ASSAULT ON PRECINCT 13, are not films about sex but about surviving violent forces.  ASSAULT has sometimes been compared to the similar works of Howard Hawks, and as it happens Hawks' one science-fiction film THE THING appears briefly on a television set in HALLOWEEN.

Far too much has been made of the distinctions between main character Laurie Strode (Jamie Lee Curtis) and her two friends Annie and Lynda.  Criticism seems to focus on the idea that Laurie survives the assault of psychopathic Michael Myers because she's a "virtuous" teen, while Lynda and Annie are sluts who have slept around.  In actuality nothing in the Carpenter-Debra Hill script suggests that Annie and Lynda are killed because of their promiscuity, though the critics may have influenced many, many derivative films to use that very formula.

According to the girls' conversations, Laurie's lack of a boyfriend is not attributed to any virtuous refusal of pre-marital sex. Rather, Laurie herself says that she doesn't attract guys because they think she's "too smart."  This is confirmed for the audience in a subsequent scene, wherein an unseen teacher calls upon Laurie in class to explicate two authors' beliefs on the nature of fate.  Laurie responds with a concise analysis of the authors, noting that the latter believed that fate was inescapable-- much in the vein of Doctor Sam Loomis' pronoucements that his former patient Michael is "pure evil."  These are certainly more metaphysical thoughts than one would get from the average filmmaker putting together a script about imperilled babysitters.

Annie and Lynda are not stupid, but they are overly complacent as to how safe they are in the suburban terrain of Haddonfield.  In an early scene Annie yells to a fast-driving car, "Hey, jerk; speed kills!"  There's a moment of suspense when the car stops, as if the driver-- whom the audience knows to be the unseen asylum-escapee Michael-- contemplates getting out to assault the girls.  The car drives on, and all three teens more or less forget about the matter.  However, when Michael descends on the girls, Lynda and Annie have both let down their guards, making it impossible for them to apprehend the threat.  To be sure, Laurie has an advantage in that she's the last one Michael attacks. Still, she shows a heroic ability to strike back at her tormentor, best represented by her desperate but clever maneuver to stab her attacker in the eye with a coat-hanger wire.

While I don't think the sexualizing distinctions apply to Laurie and her friends, there's certainly a sexual element in the Michael Myers makeup. The prologue informs us that at the age of six little Michael Myers took a knife and stabbed his sister after she'd made love with her boyfreind.  Yet, though this inevitably conjures the spectre of incestuous sexual jealousy, Carpenter and Hill only indirectly invoke Freudian explanations of Michael's malice.  Then they undercut the standard psychological interpretations by having their Voice of Authority speak not of the Oedipus complex but of an "evil" that has left Michael bereft of any normal affects.  It's also inevitable to associate the stalker's knife-attacks with the employment of a substitute phallus, but one must ask: is it because Michael suffers from negative compensation, or because he has, in some inexplicable way, become the literal incarnation of "the Boogeyman?"  Does he attack young women because he's attracted to them, or because, being sheer evil, he opposes everything that symbolizes life?

This brief analysis must pass over other complexities of Carpenter's direction.  However, the question arises: what type of phenomenality does the film portray?  In this film-- unlike others in the series-- Carpenter and Hill keep the audience guessing.  Does Michael really possesses some sort of supernatural potency, or does he just throw off his injuries because he's too crazy to know he's hurt?  If there had never been another film in the HALLOWEEN series, I might go with the latter, though being shot six times point blank is pretty good even for the most enfevered psycho.  However, since the initial film becomes implicated into the scheme of the later films, where Michael survives incredible assaults, I have to categorize even the first film as a "marvelous" work.


Posted by Gene Phillips at 3:19 PM
Email ThisBlogThis!Share to TwitterShare to FacebookShare to Pinterest
Labels: the marvelous