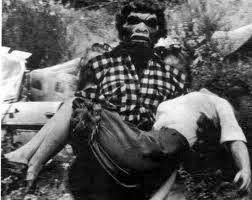 
Jack Arnold's final 1950s sci-fi opus, MONSTER ON THE CAMPUS, isn't on the same level as his more celebrated classics, such as IT CAME FROM OUTER SPACE and THE CREATURE FROM THE BLACK LAGOON.  In essence, CAMPUS might be best regarded as "Mister Hyde Lite."  That said, CAMPUS easily blows all or most of SYFY's monster-fare out of the water.

David Duncan's script may be regarded as somewhat "by the numbers," in that he seems more concerned with making the various plot-points link up than creating interesting characters.  Still, Duncan's plot-points communicate a genuine love of sci-fi concepts.  Donald Blake, the university prof doomed to regress to the level of a Neanderthal man, is not guilty of any Faustian attempt to gather forbidden knowledge.  He shows a certain pride in humankind's ability to advance from bestiality, and though he studies prehistoric life, he doesn't seem fascinated with the subject in any obsessed manner.  And though the film's first scene shows him joking about having a woman helpless in his power-- his fiancee, who's being kept immobile while he models a plaster mask upon her face-- Blake shows no special animus toward the female of the species.  If anything, Blake's rather bland in comparison to most versions of Doctor Jekyll, who usually does have some unhealthy preoccupations.  At the same time, I don't think the script would have been improved had Blake been more three-dimensional.

In a way the monster is brought into being by nothing more than a series of unfortunate accidents.  Blake, being a student of things prehistoric, orders a preserved coelocanth sent to his Dunsfield college. He's curious to find out what properties have allowed the prehistoric fish to survive the mutative forces of evolution.  Of course, the idea of a special factor that resists such forces runs counter to the actual theory of evolution as it was known in that era.  No scientist would have countenanced that evolution was a "force," but the fudge-factor works fine as a sci-fi concept.  Unbeknownst to Blake, the natural evolution-retarding factor of the fish is enhanced by the shippers' use of "gamma rays" to keep the creature from putrefying.  The gamma rays give the dead critter's blood the power to cause temporary "throwback" mutations in any organism.  A dog and a dragonfly both drink the fish's blood, while Blake takes the blood into his body via a cut in his hand.

The events that lead "the Beast of Dunsfield" (as a newspaper-headline dubs him) to commit murder are reasonably well constructed, and Blake's attempts to avoid seeing the truth are very much in the Jekyll tradition.  Unlike Jekyll, though, as soon as Blake realizes what's happened to him, he sets himself up to be killed.  Granted, neither the script nor actor Arthur Franz completely convey the character's guilt at having taken life, despite the fact that he's innocent of conscious wrongdoing.  Arguably Blake, once he's regressed to the savage state to which he deemed himself superior, prefers death to any rehabilitating cure.

The film is noteworthy for having possibly some minor impact on two Marvel Comics features. The name "Donald Blake," alter ego to the Mighty Thor when he debuted in 1962, is at best a minor and probably unintentional influence, assuming that one of the two creators saw the film.  A more substantive influence is the script's citation of "gamma rays," which are indirectly one cause of Blake's transformation, just as the same rays directly cause the bestial mutation of the Incredible Hulk.  It's interesting, though, that whereas the Hulk followed in the footsteps of many other monsters created by radiation from military weapons, "the Beast of Dunsfield" is created by a nuclear-derived technology designed for mundane peacetime usage.  At present it's the only example I can recall where a movie-monster resulted from "better living through the Atom."
Posted by Gene Phillips at 4:02 PM
Email ThisBlogThis!Share to TwitterShare to FacebookShare to Pinterest
Labels: the marvelous