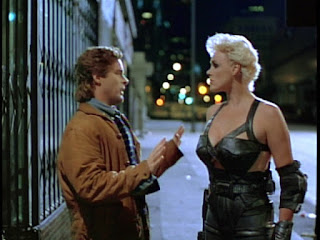 
GALAXIS, a name that is referenced nowhere in the rest of the movie, went under a couple of other names in its rental days, but essentially it's a catchpenny amalgam of numerous tropes from STAR WARS, TERMINATOR, and a host of other SF-action films. It's only got two things going for it: the charms of the very tall Brigitte Nielsen as alien heroine Ladera (though, to be sure, those charms don't include good acting), and the fact that both writer and director make the film look fairly good despite its low budget, probably because both men were principally "visual effects guys" for the majority of their respective careers.

On a far-off space-opera planet named Sintara, a megalomaniacal fellow named Kyla (Richard Moll, foreshadowing Kylo Ren, perhaps?) attacks the planet's defenders in order to steal a mystical crystal. The crystal functions as a catch-all for just about everything the writer wants it to be, for while Kyla wants it to give himself great super-powers, the crystal is also integral to the heart and soul of the Sintaran people. As its guardian Lord Tarkin (a more derivative STAR WARS reference) hilariously explains, the crystal "is the antithesis of our ways." Hmm, maybe the writer was reading his Hegel and got his synthesis mixed up with his antithesis? Or maybe he just tossed in any old ten-dollar word he happened to think of? Either way, the rest of the script is depressingly humdrum after that howler.

Tarkin (no Moff) is killed by Kyla, who absconds with the crystal. Before Tarkin dies, he confides to his sister, warrior-woman Ladera, that there's a twin of the crystal on a world called Earth. Somehow this crystal's existence is supposed to be a stop-gap against its being snatched by an alien overlord, but when Kyla (somehow) finds out, he follows Ladera to Earth, believing that he can double his powers with the second stone.

Having got all the expository set-up out of the way, the rest of the film is just action, action, action, distinguished only by Ms. NIelsen's charms as a tough-girl heroine. (At one point she blocks a gunman's shot with her gauntlet, like she's Wonder Woman.) She fights Kyla and various Earth-thugs, has a little romance with a nice Earth-guy, secures the crystal and goes home.

Oddly, in a slightly later work called SURVIVOR, the same writer used the names "Tarkin" and "Kyla" again, even casting Richard Moll in the latter role, though the SF-scenario had nothing to do with the setup in GALAXIS.

Posted by Gene Phillips at 8:53 AM
Email ThisBlogThis!Share to TwitterShare to FacebookShare to Pinterest
Labels: combative adventures, the marvelous