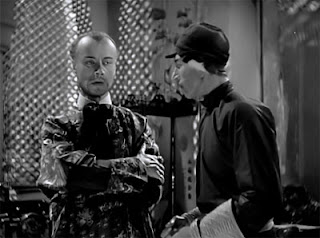 
From everything I've read about the original 1914 PERILS OF PAULINE-- to this day the only silent serial the average person has heard of-- the titular heroine and her boyfriend were engaged in a series of mundane perils, aimed at them by a scheming lawyer. In other words, unlike some other silent serials, PAULINE had no metaphenomenal content.

The 1933 serial borrowed only the basic image of a girl and her guy fending off dangers in foreign lands, but placed it in the context of weird archaeological adventure. Pauline Hargraves (Evalyn Knapp) and her professor-father travel to various exotic ports in search of an artifact, and a young man, Bob Warde (Robert Allen), joins the party largely because he fancies Pauline. The artifact can give the professor the information he needs to synthesize an ancient poison gas of catastrophic capabilities. As is often the case of serials, the reasons of the "good scientists" for inventing or uncovering a deadly weapon are left largely undefined, and PAULINE gives less reason than comparable serials like 1937's BLAKE OF SCOTLAND YARD. Palpably the real "reason" is that the scientists' efforts motivate vile villains to acquire the same weapon for nefarious purposes-- said villain this time being one Doctor Bashan (John "no relation to the singer" Davidson).

Since much of the original PAULINE is lost, it's hard to be sure how much of an action-girl the main heroine was. However, Knapp's Pauline is certainly not one such. There's a scene in which she sees Bob being attacked by several Bashan henchmen, and takes out a pistol to shoot one of the bad guys, and there are two short scenes in which Pauline has to fend off female attackers. But there's no real sense that she's especially capable in the action department, despite facing her father's enemies with courage. Bob, even though he's simply an out-of-work engineer, proves to be a vigorous hand-to-hand fighter, even though this Universal serial's level of fight-craft is lively but sometimes awkwardly staged. Despite the use of stock footage and pre-existing sets, though, PAULINE does capture the sense of thirties adventure-stories, in which the heroes (admittedly, almost all Caucasian) could freely delve into exotic worlds without ever worrying about passports or revolutions.

Bashan, though he doesn't do much beyond sending henchmen here and there, is the most engaging character in the serial, while the good professor (played by James Durkin) at least seems like a morally upright fellow despite his dubious desire to unearth an archaic weapon. Many reviewers didn't like Willie Dodge, the comic-relief butler to the professor, but I thought that he was easier to take than many such alleged comic types in chapterplays. Maybe I just liked that he sported the same last name as the character "Elaine Dodge," whom Pearl White portrayed following her success in the original PAULINE.

The poison gas doesn't actually become a major element until the last few chapters, but in contrast to a lot of the Eurospy movies of the sixties, at least the super-weapon does make an appearance.


Posted by Gene Phillips at 3:34 PM
Email ThisBlogThis!Share to TwitterShare to FacebookShare to Pinterest
Labels: combative adventures, the marvelous