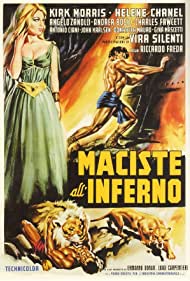 The Italian title for this 1962 flick reproduces that of 1925's silent MACISTE IN HELL, but the two films bear no resemblance except for the notion of a strongman-hero descending into the fiery pit to face various monsters. CURSE, directed by Riccardo Freda, strongly resembles parts of the 1960 horror-hit BLACK SUNDAY, directed by Freda's countryman/colleague Mario Bava.

Like SUNDAY, CURSE opens with the spectacle of a small community (this time, in 15th-century Scotland) executing a witch. Aged Martha Gaunt doesn't deny being a witch, but she claims that she only struck back because Parris, the judge accusing her, kept trying to make her become his lover. (One can't help thinking that he was an extraordinarily patient pursuer, since both the witch and the judge are old at the time of Martha's condemnation.) The script does have a later-revealed reason to present Martha as an old woman, even though this circumstance undermines some of the opening's plot-logic. At any rate, before she dies, Martha curses the whole Scottish town.

For a hundred years, Martha's curse plagues the townspeople in one way or another. Then a local merchant marries a young woman named Martha, whose family name is also Gaunt. The townfolk immediately accuse the merchant and his wife of being witches and put them on trial.

To the couple's good fortune, the mysterious muscle-man Maciste (Kirk Morris) rides into town and champions the innocents. Despite the fact that Maciste is clad only in a loincloth-- a strange fashion-choice in medieval Scotland-- the locals hold off on their execution if Maciste can end the curse of Martha Gaunt. Maciste agrees, and the rest of the film is devoted to his descent into Hades, fighting off monsters until he can end the witch's curse.

The hero's road to Hell takes an appealing mythic form, in that he uproots the tree on which Old Martha was hanged, and finds stairs leading down into perdition beneath the roots. Unfortunately, none of Maciste's battles with Hell's denizens-- a lion, a spike-trap, and a hairy giant-- are more than passable. (Some versions edited out some extra scenes, like Maciste fighting snakes, but none of the perils are essential to the plot.)

Maciste makes one ally in Hell: a beautiful woman named Falina (Helene Chanel). However, when the viewer sees her hanging out with Judge Parris of 100 years previous, he may rightly suspect her motives-- and sure enough, Falina is a youthified version of long-dead Martha. Why the denizens of Hell-- whose master is never seen-- decided to let the witch exist in her younger form, or why she's associating with the man who had her slain-- are questions that go unanswered.

Because Falina is a gorgeous woman, though, Maciste falls for her, and experiences a certain amount of grief when he realizes who she really is. This may be the movie's most interesting departure from the usual peplum template: the strongman comes to the defense of a young woman, but she's married and the strongman never chooses her over the "bad woman." In the end, WITCH'S CURSE is just a decent action-fantasy, with a nicely handled fight between the hero and a "giant" and the always lovely Helene Chanel.