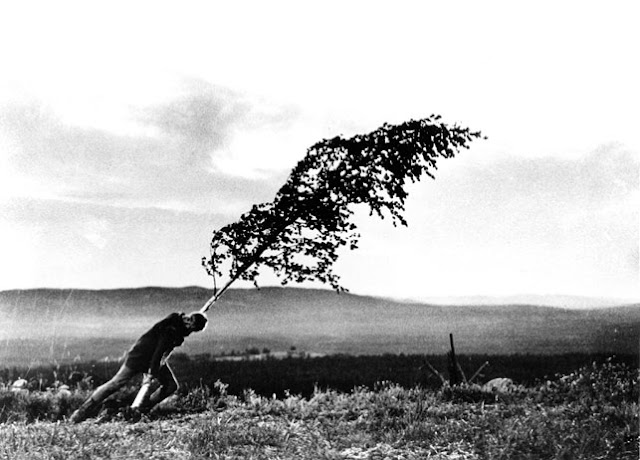 Ingrid Bergman's VIRGIN SPRING was the second and last of his films to be set in Europe's pre-Renaissance medieval era, following the international success of 1957's THE SEVENTH SEAL. SPRING, though, came about in a more circuitous way. While Bergman both wrote and directed SEAL, Ulla Isaksson, a writer known for novels on religious themes, is generally credited with the idea of freely adapting a 13th-century Swedish ballad to film. Isaksson had previously collaborated with Bergman, having written the screenplay for 1958's BRINK OF LIFE, but the two of them never worked together again. Thus the coming together of two Swedish creators on a project with deep metaphysical dimensions seems to have been something of a happy accident.

The specific religious conflict of SPRING is one that Bergman rarely if ever evoked again: the opposition between paganism, whose deities are tied to nature and its cycles, and Christianity, whose God is said to transcend the world-- so much so, though, that it often become difficult to discern the latter's presence at all.

By the 13th century, Christianity has ousted the old Scandinavian religions and has become the dominant belief-system, particularly for the more prosperous class. Yet in Sweden some low-class citizens still pray to the old gods, which dichotomy brings elements of class conflict into the mix.

Per Tore (Max Von Sydow) is a devout merchant with a wife and one daughter, Karin (Birgitta Petterson). Tore's daughter is the apple of his eye, but he's so confident of his good fortune that he does not think twice when he sends Karin on a minor errand-- to take some candles to the local church-- with only one attendant. The attendant is a pregnant lower-class serving-girl, Ingeri (Lummel Lindblom). Ingeri, in addition to being poor and made pregnant by an unspecified suitor, has been forced to work for the Tore family, and it's briefly suggested that Tore's wife is the sort of Christian who never lets anyone forget her bountiful charity. Filled with resentment, Ingeri prays to the trickster-god Odin, wishing ill fortune upon Karin.

(Side-note: an online review posits that Ingeri may be Tore's own illegitimate byblow. There's no evidence of this in the text, and in the few scenes Tore has with Ingeri, he relates to her as nothing but an unrelated servant.)

The two young women-- Karin riding a horse while Ingeri walks-- make their way through the thick Swedish forests to their destination. On the way they stop at a mill, and meet a peculiar one-eyed old man. Karin thinks little of the encounter, but Ingeri becomes frightened by the old man, whose one eye suggests the traditional appearance of Odin. Ingeri worries that she has summoned a curse upon Karin and she refuses to accompany Karin further. Karin goes on alone, but the nerve-wracked serving-girl can't bring herself to flee the mill. She hands around the mill, while the old man makes curious references to "power" and then makes a pass at her. She runs out of the mill and, by luck or design, follows Karin's path.

As it happens, Ingeri witnesses the very misfortune she wished upon Tore's daughter. Karin is accosted by two rude herdsmen and their buddy, a dimwitted young man who doesn't quite know what's going on. The herdsmen attack, rape and kill Karin, while the young fellow and Ingeri look on. Ingeri flees, while the herdsmen despoil Karin of her fine clothes and leave her unburied.

Though eventually Ingeri makes her way back to the Tore household, evidently she takes some roundabout way, for it's actually the three low-class fellows who end up there first, seeking shelter from heavy rain. Tore's wife admits the trio in accordance with the laws of hospitality. However, the two rapists make the mistake of trying to sell Karin's fine clothes to the merchant's wife, and of course Mrs. Tore recognized the attire immediately. She dissembles, informing Tore of her suspicions. At this point Ingeri shows up and begs for mercy, explaining what befell Karin and Ingeri's part in the curse. Tore then plots his revenge upon the rapists and their unwitting accomplice. After the men have all been slaughtered, Ingeri takes Tore to bury his dead daughter-- and when Tore lifts Karin's dead body from the ground to inter her, a fresh spring-- whether by coincidence or by divine fiat-- emerges from the ground where Karin's head lay, and Tore seeks absolution by bathing his face in the waters.

The broad outline of this plot was conspicuously "borrowed" by West Craven for his 1972 horror-film LAST HOUSE ON THE LEFT, which kept a few of the sociological trimmings and ejected any metaphysical content. The villains of HOUSE are more conscious of their evil than are the predators of SPRING, who register as little more than animals. And certainly the rich guy in the Craven film is not set up to emulate the existential conflict of the Biblical Job, as is Per Tore. Tore feels himself at the center of God's benevolent universe, only to have God, or maybe just blind fate, deprive him of his only offspring. Both Tore and Ingeri move in a universe at once ordinary and uncanny, and no viewer can be sure whether either God or Odin truly exist. Bergman's film never actually endorses paganism, but even in black and white, the crisp photography of Sven Nykvist communicates a sense of the brooding profligacy of nature, and one cannot tell if the Christian God actually rules over nature or has simply retreated from its intermingled beauties and perversities.

While neither the rapists nor their simple-minded friend comprehend the vileness of Karin's murder, Tore as a Christian cannot help but realize that he's traduced his own beliefs by taking vengeance, which is the reason he must seek absolution from even an ambivalent miracle. The merchant's insoluble conflict with nature itself is best illustrated by a long scene prior to Tore's murder of his victims. He needs to strip strands of beech-bark to bind his enemies, but instead of just taking what he needs, Tore wrestles with the fragile tree, pinning it down and tearing to shreds. It's a futile attempt to vanquish nature's proclivities for senseless violence, and the maybe-miracle of the spring merely gives fretful humans a ritual by which they can feel themselves able to transcend the natural, even as their God does.

Posted by Gene Phillips at 9:21 AM
Email ThisBlogThis!Share to TwitterShare to FacebookShare to Pinterest
Labels: phantasmal figurations (u), the uncanny