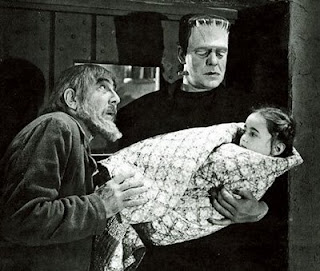 "...the first film in the series to begin the tendency to donwplay the Frankenstein Monster himself as a vital character in the stories.  The central characters, much like their writers, treat the Monster as nothing more than a means to an end.  One might take this development as a backhanded compliment to James Whale.  Perhaps Whale and his assorted writers did such a superlative job of imbuing the creature not just with "life" but with characterization and dimension that every succeeding writer on the Monster didn't even try to play in Whale's ballpark."

On re-viewing the next film in the series, I have to qualify this somewhat.  While GHOST doesn't come up to the "gold standard" of James Whale, the film-- directed by Erle C. Kenton and scripted by two writers, neither of whom had worked with Frankenstein or any other "monster" as such-- does make an effort to treat Frankenstein's creation as a distinct being with some (admittedly confused) aspirations.

Kenton and Co. do a pleasing enough job of following up the plot-threads established by Rowland Lee's SON, which finishes up with the son of the Monster's creator disposing of the creature in a sulfur pit and pumping bullets into the creature's only pal, hunchbacked schemer Ygor (Bela Lugosi).  GHOST's script naturally allows the near-indestructible monster to survive the sulfur pit, but there's less narrative emphasis than with Lee on just what a cosmically-charged titan the Monster is.  Instead, the Monster (played this time out by Universal's spanking-new horror-icon Lon Chaney Jr.) is somewhat weaker than in SON, and needs the help of Ygor (who also survives his "death") to get up to speed.  To that end Ygor enlists the services of a previously unmentioned son of Henry Frankenstein, a psychologist named Ludwig, to help the Monster.

Where the script of SON merely had the creature used as a means to an end by both Wolf and Ygor-- an idea probably borrowed from Whale's BRIDE-- the Monster is a little more independent.  Upon entering Ludwig's town of Vasaria, the Monster is separated from Ygor and befriends a little village-girl, Cloestine, by helping her get her ball.  This seems to be a development of the Monster's tentative friendship with Wolf's boy in SON, but Kenton and Co. develop the pathos much better, in that the Monster's reward for helping the little girl is to be attacked and imprisoned by the panicky townspeople.  Nevertheless, the Monster's affinity for the little girl becomes an important, if problematic, plot-point later.

Whereas SON presented Wolf Frankenstein as having been so aggravated by his father's ill-fame that he decides to carry on the tradition, GHOST presents son Ludwig as depressingly stable.  As played by Cedric Hardwicke he's many miles away from the jittery Colin Clive-esque performance of Rathbone in SON.  Unfortunately, Ludwig is dull and moralistic.  When he's brought into court to view the captive Monster, the creature seems to recognize him-- a stunt that might have played better if the actor looked like either Colin Clive or Basil Rathbone.  Ludwig staunchly denies knowing anything about his father's creation, causing the Monster to break free of his restraints and very nearly kill his "brother," before a summons from Ygor draws him away.

Despite being a pillar of the community, complete with a dull daughter who has an even duller suitor (the requisite but wholly needless romantic couple, at least in this film), Ludwig does get involved with the Monster, but rather than revivifying it, as Ygor wants, he initially plans to destroy the creature via dissection.  Ludwig's coldbloodedness, though sanctioned by the script, is commented upon by his associate Doctor Bohmer (Lionel Atwill).  Ludwig merely rationalizes,  "How can you call the removal of a thing that is not human 'murder'?" But the audience surely remembers the Monster acting human when treated humanely by Cloestine, so Ludwig's argument isn't supported by the ethos of the narrative.

However, Ludwig comes up with another rationalization: if he can get rid of the sick brain placed inside the Monster's skull from the beginning, then he-- echoing Wolf's sentiments here-- might be able to reform his father's reputation.  It so happens that Ludwig and Bohmer have already performed a brain-transplant or two, so Ludwig (after being inspired by a visit from the imagined "ghost" of his father) gets the idea of disposing of the old brain and putting in the brain of a selfless fellow named Dr. Kettering, whom the Monster slew during one of his rampages.

This would be the first, but sadly not the last, time the Frankenstein films played the game of "brain, brain, who's got the brain."  Ygor, for his part, wants his own brain transferred into the Monster's near-invulnerable body.  The Monster kidnaps Cloestine with the idea of having her brain placed in his body, apparently in some warped notion of gaining the child's innocence for himself.  Ludwig agrees to neither proposition, but with some Faustian bribery from Ygor, Dr. Bohmer betrays Ludwig by substituting Ygor's brain for Kettering's.  For a few minutes before the climax, the Monster talks again, for the first time since BRIDE OF FRANKENSTEIN, but with the accented voice of Ygor improbably coming out of the mouth of Chaney's Monster.  However, the plans of Ygor and Bohmer go wrong purely by bad luck on their part, and a resulting conflagration saves the unsympathetic Ludwig from having unleashed an intelligent Monster upon the world.  Oh, and the boring young couple escapes too.  Whoopee.

There are a lot of good moments throughout GHOST, particularly the above described scenes in the courtroom and the Monster's first encounter with Cloestine. Chaney does reasonably well in his only official outing in the Monster's big shoes (though he subbed for a few scenes as the Monster in the ABBOTT AND COSTELLO entry), but his makeup apparently restricted his ability to use his facial expressions freely.  Lugosi's Ygor is still amusing, but his dialogue isn't nearly as sharp as in SON.  Nevertheless, even the film's rather unsympathetic hero has the effect of shining a light more brightly upon the series' horrific stars.


Posted by Gene Phillips at 3:42 PM
Email ThisBlogThis!Share to TwitterShare to FacebookShare to Pinterest
Labels: the marvelous