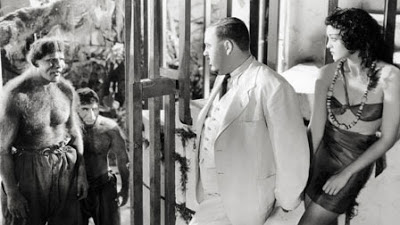 
Joseph Campbell's "cosmological function" deals with how mythic stories recapitulate aspects of everything in the physical world-- the physical nature of living things, human and otherwise, of the non-sentient world ranging from banal rocks to cosmic space-dust, and so on.  Where popular metaphenomenal films are concerned, the type of cosmological knowledge most often addressed is the nature of the many nonhuman members of the animal kingdom.  I've noted two examples of such films in this review, for example.

In 1932 Paramount Pictures, hoping to emulate the success of competing studio Universal with outrageous horror-films, commissioned its greatest success in that genre, ISLAND OF LOST SOULS, directed by Erle C. Kenton with a screenplay by Philip Wylie and Waldemar Young adapting H.G. Wells' 1896 novel THE ISLAND OF DOCTOR MOREAU.  Without dwelling too much on the differences between novel and movie, suffice to say that SOULS'  narrative grafts many aspects of Universal's successful 1931 FRANKENSTEIN to the skeleton of Wells' novel-plot, and for good measure ratchets up the sex and  violence as well.  It's probably no coincidence that Moreau (Charles Laughton) justifies his hideous experiments-- aimed at transforming animals into human beings-- by asking the viewpoint character Parker, "Do you know what it means to feel like God?"-- and that such a line had appeared in the 1931 FRANKENSTEIN, only to be cut from most theater-prints.  Moreau's sexual voyeuerism-- his desire to see if his transhuman creatures can mate with humans like the hapless Parker (Richard Arlen)-- provides an element not present in Whale's FRANKENSTEIN.  It does plays a significant role, however, in Whale's 1935 BRIDE OF FRANKENSTEIN, where voyeurism informs Doctor Pretorius' ambition to give a mate to Frankenstein's monster-- a voyeurism absent from the  Mary Shelley source novel.  Some cinematic cross-pollination of influence seems likely here.

Marxist critics would (or have) doubtless make much of the confusion between Moreau's nonhuman creations and the nonwhite peoples native to the locale of the South Sea Islands.   I don't deny that some racial politics enter into SOULS, especially since not one but two members of the "higher" Caucasian order-- Parker and his fiancee Ruth (Leila Hyams)-- are put in danger of mating with the member of a "lower" race, with Parker in danger of being seduced by the panther-woman Lota (Kathleen Burke) and Ruth threatened with rape by the ape-man Ouran.  This is even somewhat reinforced by the fact that Lota is not very different from many purely human presentations of the image of the "natural child" of South Seas fiction; a sarong-clad beauty who loves the white outsider passionately while imposing on him no societal strictures.

When all is said and done, though, it does violence to the movie to read it only in terms of sociological hegemony.  SOULS may have disappointed Wells in that the film pays little attention to the moral issue of animal vivisection. But the Wylie-Young script, by injecting sex that is one step removed from bestiality, is stronger than the novel in terms of portraying the "otherness" of the animal kingdom, which has its own integrity and value beyond that of even the most marginalized human cultures.  The viewer, who certainly has submitted to some sort of moral conditioning like what Moreau gives his creations, should feel an awful wrongness when the Sayer of the Law-- a beast-man played with great brio by Bela Lugosi-- intones Moreau's version of the sixth commandment:

"Not to spill blood, that is the law. Are we not men?"

Because most audiences resent Moreau's heartlessness, the novel's disposition of the mad doctor is rather anticlimactic, even if it promotes some Wellsian point about the absence of the beast-men's "god."  The film shows the "god's" hypocrisy in that he commands Ouran to break the law against killing, exposing Moreau's hypocrisy as well as his brutality.  The scene in which the "not-men" revolt against the tyrant, subjecting him to his own House of Pain, is at once liberating and horrifying, just as the death of Lota (the film's original creation), who kills Ouran at the expense of her own life in order to protect Parker, remains one of the most pathetic scenes in early horror-cinema.

SOULS has a thematic richness that even a longer essay than mine could not exhaust. Nothing remotely like this can be said for Jerry Jameson's THE BAT PEOPLE.  The most I can say for it is that although what Jameson made was in essence another "werewolf" picture, I do give him points for trying to create a new monster.

However, Jameson and writer Lou Shaw don't manage to create a new mythology for their monster, nor do they give the afflicted victim John Beck any pathos.  His situation certainly has pathetic potential.  Newly married to his wife Cathy, John takes them on their honeymoon to Carlsbad Cavern, where they go spelunking. In the cave John is bitten by what seems to be a common fruit bat.  For no clear reason, the bite mutates him into a man-bat-- interestingly, about four years after the comics-character Man-Bat appeared in a BATMAN comic book, though with the superior explanation of a botched scientific experiment. 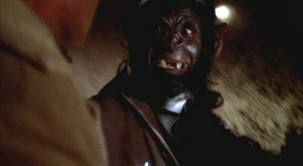 Since the script shows no interest in explaining how John is transformed, it similarly shows no interest in the nature of the chiropteran creatures that change John into a "were-bat."   The only time that the mysterious nature of the bats appears are those scenes when John and Cathy are in the caves, both at the start and conclusion of the film.  These are also the only scenes that are pleasingly creepy, while the scenes in which the "were-bat" preys on various victims are utterly forgettable.

Only one element comes close to providing a theme: the test of Cathy's loyalty to her new husband.  Cathy is initially distraught, not just by John's increasing illness but by the fact that a smarmy police sergeant attempts (correctly) to tie John to the murders.  As Sergeant Ward Michael Pataki not only provides the best performance but also the best source of conflict, for he also attempts to proposition Cathy for sexual favors.  She rejects him and remains loyal to John, so that in effect Ward becomes the villain, whom the audience hates for encouraging infidelity.  At the conclusion, despite the fact that John's crimes are greater, Ward is the "monster" slain at the end, while Cathy gives herself up to be bitten by the weird cave-bats so that, in theory at least, she and John will live together as a couple of "bat people"-- though the film ends by merely suggesting this outcome.

Posted by Gene Phillips at 3:40 PM
Email ThisBlogThis!Share to TwitterShare to FacebookShare to Pinterest
Labels: the marvelous