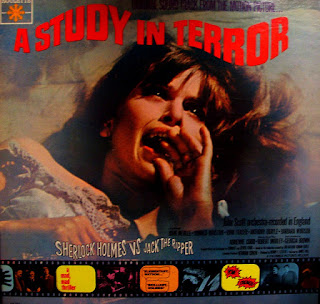 
Some fans of Sherlock Holmes have regretted that Arthur Conan Doyle’s most famous fictional creation didn’t square off against some version of the contemporaneous real-life killer, Jack the Ripper.  I disagree. I believe that had Doyle attempted this-- directly using the events of real life occurrences as a foundation for a fictional tale—any such story would have been as problematic as Edgar Allen Poe’s similar attempt in “The Mystery of Marie Roget.”  To say the least, the unsolved events of the Ripper murders probably would have been too close for Doyle to do justice to them within the sphere of a Sherlock Holmes story.


However, with the passing of time, Jack the Ripper’s murders have accrued to themselves a mythology not unlike that of Doyle’s detective.  Though Doyle’s stories don’t include the spectre of a Ripper-like killer, later iterations of the Holmes character would put the detective on the trail of such specters.  The 1944 Universal film “The Pearl of Death” features a serial killer known as “the Hoxton Creeper,” while a 1946 radio-play pits Holmes against another British icon of mass murder, Sweeney Todd—or at least, a madman who thinks that he is Sweeney Todd. But the first significant encounter between Holmes and the Ripper appears in James Hill’s 1965 A STUDY IN TERROR.


With a script by Derek and Donald Ford, who also provided the script for THE BLACK TORMENT, Hill’s film uses the menace of the Ripper murders for the purpose of societal critique.  Throughout STUDY the fate of the prostitutes menaced by  “Saucy Jack” indicts the callousness of British society, an indictment with which the conservative Doyle might not have agreed.  Holmes is placed in the position of striving to both save the marginalized poor and to keep the government, whatever its faults, from falling into chaos.


I won’t dwell here on all the intricacies on the complicated plot, which rates as one of the more seamless mysteries presented within the corpus of Sherlockian films.  In contrast to some film-adaptations that present Holmes as a cold fish, John Neville’s performance makes Holmes a character with a great deal of heart and compassion to match his relentless logic-- all the better to give the puzzle of the Ripper’s identity a socially significant dimension.


To be sure, Holmes is put on the trail of the Ripper by an item mailed to him by some unknown party: a box of medical instruments, which immediately suggests the surgical precison of the Ripper murders.  This clue puts Holmes on the trail of a missing lordling, Michael Osborne, who had medical experience.  One of Hill’s first criticisms of stratified British society appears when Holmes and Watson meet Michael’s hidebound father, who affronts Watson by speaking of medicine as a mere “trade.”  The elder Osborne cast his younger son out because of Michael's marriage to a prostitute with the deliberately ironic name of “Angela.”  Holmes and Watson also encounter Michael’s brother Edward, who encourages the sleuths to find his brother despite their father’s condemnation.


A suspect arises in Doctor Murray.  Holmes and Watson first meet him as the coroner assigned to examine the Ripper’s victims, but he’s revealed to have a close association with Whitechapel, in that he and his niece run a soup kitchen to feed the poor of that district.  It’s further revealed that Edward supplies the money to run the soup kitchen, having met Doctor Murray during his own search for his missing brother and having formed a romantic tie to the niece.


The Ripper continues to attack prostitutes despite police measures.  The law’s failure brings about demonstrations of civil unrest, some of which are brought about by Murray, who advocates the reformation of Whitechapel. Sherlock’s brother Mycroft (Robert Morley) importunes Sherlock to find the slayer, whom some believe to be an “Anarchist.”  Mycroft fears that the government—of which Mycroft is a part—may come tumbling down due to the chaos encouraged by the Rpper’s misdeeds.


Someone else doesn’t appreciate Holmes and Watson nosing about, as they’re set upon in the streets by two cutthroats. In contrast to many Holmes films, this one gives both the detective and his partner the chance to show off their combat-skills, as the two heroes beat off the hoods easily with the help of their sword-canes.  As Holmes continues to pursue the clues relating to the missing Michael, he unravels a complex tapestry of blackmail, betrayal, disfigurement and insanity, all of which culminates in a lively physical battle between Holmes and the revealed Ripper—who, fittingly enough, is a mad aristocrat with a hatred for lower-class women.


Considering the period in which STUDY was filmed, the script is remarkably clear-eyed about the unappetizing lives of the Whitechapel hookers, far more than, say, 2001’s FROM HELL.  The Ripper’s first victim is seen stealing from a john in a tavern, but the bullying she receives from the bartender renders her sympathetic despite her crime. Another victim is locked out of her lodgings for her inability to pay, and is seen pathetically trolling for clients just to find a place to sleep.  Unfortunately for her, the men in Whitechapel don’t seem that interested; minutes before the second victim meets her death, one of her fellow prostitutes comments, “I don’t know what’s the matter with the men lately.”


One interesting facet of the script is that once the Ripper has met his end, Holmes—who seemed perfectly willing to see the government brought low while it allowed innocents to die through neglect—conceals the murderer’s true identity.  The final moments of the film don’t justify this discrepancy, but one may presume that Holmes doesn’t really believe anything can be significantly altered, and that he’s satisfied to see the serial murders come to an end—even if it’s only curing the symptoms, not the disease.
Though many of the Sherlock Holmes stories emphasize ratiocination over action, STUDY enters my category of "combative adventures" in that the narrative places strong emphasis-- also seen in the ad above-- with regard to the physical confrontation of the two mythic figures of Holmes and the Ripper.  It also doesn't hurt that Neville's Holmes is one of the more action-oriented versions of the famous sleuth.

Posted by Gene Phillips at 2:39 PM
Email ThisBlogThis!Share to TwitterShare to FacebookShare to Pinterest
Labels: combative adventures, perilous psychos (u), the uncanny