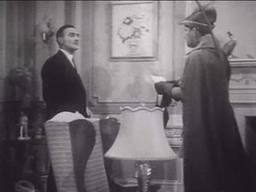 
THE GREEN ARCHER, the fifth serial directed by James W. Horne after his breakout success in 1938 with THE SPIDER'S WEB, is a tolerable but unexceptional time-waster.

Unlike many serials, which varied their locations to maximize excitement, Horne keeps most of the action on the set of a massive old castle filled with all manner of sliding doors and trick panels, many of which are used by the villains to imperil the hero and his allies.

Preceded by an original Edgar Wallace novel and a silent serial, ARCHER is said to resemble neither except in broad outlines.  Garr Castle, apparently one of the many reconstructed-castles-on-American-soil, is taken over by a gang of jewel thieves led by Abel Bellamy (James Craven).  Abel-- possibly so named because the scripter was tired of evil brothers named "Cain"--  has had his innocent brother Michael sent to prison in order to gain control of the castle.  Even the apparent protagonist, insurance investigator Spike Holland, is unable to uncover evidence of Abel's crimes.

Enter the Green Archer.  Before he shows up, Abel and his buddies learn about the legend of a "green archer" who battled injustice.  Then a mysterious masked man starts shooting arrows at the bandits and making their crooked lives miserable.

The basic "mystery" of ARCHER follows the same pattern as 1938's LONE RANGER serial, in which the identity of the hero remains concealed from the audience as well as from the villains.  Perhaps slightly sending up this conceit, director Horne, who co-wrote the script, also has the villains unleash one of their own men in the archer-getup for some reason I don't remember.  Both the costume of the hero and the castle-gimmicks used by the villains qualify this serial for the "outre outfits skills and devices" trope in its uncanny phase.

James Craven plays Abel Bellamy with broad, borderline comic gestures, while hero Victor Jory and heroine Iris Meredith turn in satisfying performances.  The psychology of sibling betrayal, which has some minor impact on the plot, is naturally not exploited with any complexity.

Posted by Gene Phillips at 3:36 PM
Email ThisBlogThis!Share to TwitterShare to FacebookShare to Pinterest
Labels: combative adventures, diabolical devices (u), outre outfits (u), the uncanny