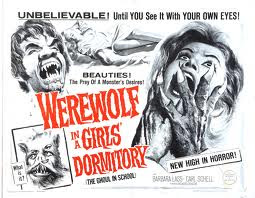 With a title like this, one might hope for a horrific melodrama that touches on gender issues, but this Italian-Austrian contribution to lycanthropic cinema offers almost no new takes on either werewolfism or gender matters.  The photography is crisp and the actors are reasonably attractive, but the film remains a staid exercise, never rising to the delirious heights of, say, the Spanish werewolf films of Paul Naschy.


DORMITORY is a murder-mystery at a  “school for wayward girls;” one which happens to be built near a forest haunted by wolves.  A new teacher, Mr. Olcott, arrives.  In a gesture signifying female deceptiveness, a student named Mary pretends to faint from an exercise-routine, apparently in the hope of being examined by the handsome instructor, though this never happens.  As Olcott checks in, it comes out that he’s under some sort of cloud: that he used to practice medicine but has taken a post only as a science-teacher.


Later Mary goes wandering in the woods at night, and meets another teacher, whom she’s blackmailing for their past sexual liaisons.  Later a shadowy figure leaps out of the forest and claws Mary to death.  The police are called in, and the film begins lining up suspects.  Is the killer Olcott, who was the most recent to arrive on the scene?  Is the professor who’s being blackmailed?  Or perhaps the creepy groundskeeper, who looks like a cross between Peter Lorre and Dwight Frye?


Since Olcott is such an obvious suspect, I don’t feel I spoil anything by revealing that he’s not the claw-killer.  He does have a past involving lycanthropy, however, in that he attempted to work out a cure for the disease at a prison, where a woman he loved was so afflicted.  The woman committed homicide under the influence of the disease—which in this film-world, can lead to the afflicted’s growth of hair and fangs in a purely scientific context. Olcott’s experiments on the female lycanthrope resulted in her death and his expulsion from the practice of medicine.  His arrival at a school that just happens to have a werewolf running around is therefore just One Big Coincidence.


Compared to some other Euro-horrors of the time, DORMITORY ranks low in the scales for either sex or violence.  The only interesting allusion to gender topics arises when an official of the school criticizes the deceased blackmailing-student for having walked out alone at night, which almost sounds tantamount to saying that “she asked for it.”  But otherwise the motif of the werewolf as a symbol of male brutality is not stressed, and the revelation of the killer doesn’t disclose any interesting motivations.
Posted by Gene Phillips at 2:16 PM
Email ThisBlogThis!Share to TwitterShare to FacebookShare to Pinterest
Labels: the marvelous